News for everyone, delivered to everyone
VOICES AGAINST VIOLENCE SERIES

After 50 years, she’s encouraging others

HER STORY IN HER OWN WORDS

Editor’s note: The text below was from a speech Nadine wrote and gave at two Twin Cities churches during Domestic Violence Awareness Month. We have used just her original first name and not her new name to protect her and her daughter.

My name is Nadine. I am 77 years old. I was married for 47 years. My daughter and I are in a protection program through the Minnesota Secretary of State and share a home. I work three part-time jobs, I assist my daughter who has a chronic illness. I am active in my church and community.

I’m telling my story not because it’s unusual, but because one in every three women will be faced with a similar story. It happens in every neighborhood, religion, nationality and workplace. Today in the time it takes me to tell my story over 200 Minnesota women will be abused.

It’s difficult to put 50 years into a few minutes.

I married this good humored man who came from an abusive background. His parents and grandfather were murdered by a family member.

We moved to Nebraska, where he was going to college, far from my family and friends. The first week, he came home from school and went into a rage because I fixed creamed corn when I also made gravy. He cleared everything from the table, leaving food and broken dishes on the floor, walls, everywhere. I was shocked! I had never seen anyone do such a thing. This was not the last time.

When I learned I was pregnant, I was thrilled and couldn’t wait to tell him. He became very angry, called me terrible names. “How could you be so stupid as to get pregnant!” He grabbed me by the hair and dragged me across the room and pulled out a handful of hair from my head.

We moved to Minneapolis. He became Comptroller of Hennepin County Department of Social Services for 25 years. He learned the system well. At home, he controlled everything. He controlled what, when, where, and if we ate. He controlled when we went to bed and when we got up. Often in the middle of the night, he’d make us get up to do something he wanted done now. He went on lavish fishing and hunting trips, but there were no family vacations. 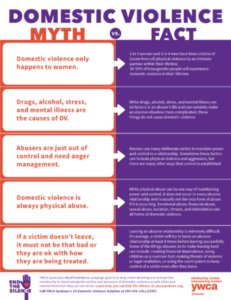 At Christmas, we opened gifts and ate, if and when he said we could. My daughter and I were nervous wrecks before holidays. His expectations of our daughter were totally unreasonable. Nothing we did was ever good enough. Everything that went wrong for him was someone else’s fault.

A friend told me he had purchased three airplanes. He didn’t even have a pilot’s license. When I asked why, he became very angry. He shouted, “I am the financial expert in the family and I’m not going to let you make the financial decisions. You are so dumb, you think 2+2 = 5. He threatened that he would take my daughter and I’d never see her again. “I have friends in high places. No one will believe you. You are nobody.” He threw me against the wall. I had large bruises on my legs, hips and head.

One day, my daughter and I went shopping. It took longer than he thought it should. When I took her home, she had a message on her answering machine that he was coming over with his .357 Magnum. Soon he was at her house yelling and waving a loaded gun at us. We were terrified. We were too afraid to call the police, for fear it would just get worse. I was threatened with a loaded gun on many other occasions.

I started having panic attacks every time I got in the car with him. He called me names, swore and yelled at me, and I felt trapped. One day alone he yelled at me over 74 times. I quit counting.

For over 40 years, I managed the accounting practice we started, but I was never allowed to get a salary or any benefits. He said,”I’m the accountant, so it’s my money.”

When he touched me, my stomach turned to knots. It was not affection. If he showed anything, it was a signal to go to bed with him. If I didn’t, I was called crude names and was told I was worthless. 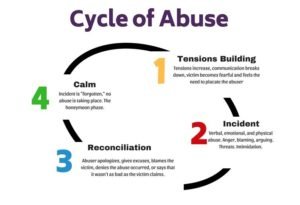 Why didn’t I just leave?

• I feared what he would do to my daughter, my family and anyone who helped me.

• I feared that no one would believe me.

• I didn’t know who I could trust to turn to for help.

• I felt paralyzed, overwhelmed and couldn’t think clearly. All I could focus on was surviving each day.

• I didn’t know if I had the strength to leave.

•I was over 70 years old, with not a lot of technical skills or formal education. Who would hire me?

I had no job, no money, and I had no idea how I would survive financially.

• I feared my church would abandon me.

What made me leave?

Through counseling, I realized the real danger I was in. Have you ever seen someone with a loaded gun in his hand in such a rage that their face does from red to gray? It was like seeing pure evil. I felt if I didn’t leave, I would be carried out in a body bag.

So I prepared to leave

I joined a support group, I prepared a safety plan, I packed a suitcase. When I shopped, I wrote the check for more and hid it. I coped important documents. I opened a checking and charge accounts in my name only.

In November 2007, with very little besides the clothing I had and the help of my daughter, I went to the Alexander House battered women’s shelter with the support of my family and his. They not only provided me a place to collect myself, by assisted me in finding housing, resume writing, resources and support.

My ex harassed my daughter. He called her doctor and said she was missing and wanted them to help him find her. He had people stalk her, take pictures of her and her home. One of the stalkers strangled and killed a woman three blocks from her house. She and I moved six times in five years to try to feel safe. She sold her home where she had lived for 30 years because she no longer felt safe.

After I left, he did everything possible to destroy me emotionally, physically and financially. He broke into my house twice, destroying things, got rid of gifts that were sentimental to me, left loaded handguns and ammunition in the house. Had people drive by my house, take pictures, report what lights I had on and who was in my driveway. A dead deer was left by my back door.

He sold our accounting practice to a friend for $1. He changed titles on properties we jointly owned. He sold a car that was titled in my name, without my signature. He removed me as a beneficiary on all of our life insurance. He filed joint tax returns without my signature and took all the refunds. He took all the equity in our home, even though our line-of-credit required both of our signatures. He is in contempt of court of nearly every court order. He moved to Arkansas to avoid enforcement by Minnesota courts.

And I thought none of this could ever happen!

In support groups I learned how many women have gone to their pastor or priest and left feeling hopeless, trapped and rejected. It is important to me to share with you my experience with my church. Over the years, I spoke with many priests and basically was told to pray – pray harder – be a better wife, love more, turn the other cheek, be forgiving. But when I left, I went to my priest, his first question was, “Are you safe now?” He told me to contact a shelter and do whatever they told me to do. Each time I went to court, he gave me a blessing and prayed with me. Knowing my church was there to support me meant everything to me. And I wish every abused woman would have this kind of experience.

How do I manage?

I work three part-time jobs. I’ve gone to a food shelf. Family, friends, and my therapist pray for me. I have reminders throughout my house: “I am with you always, signed God.”

One day at a time, I have seen miracles unfold in my life. I have a roof over my head and I can actually laugh and celebrate holidays. It wouldn’t have happened without the support of a shelter, the support of my friends, daughter, family and God’s every present help. I know God loves me and I am worthy of peace.