News for everyone, delivered to everyone
Under the hood

Art-A-Whirl and the creative class: 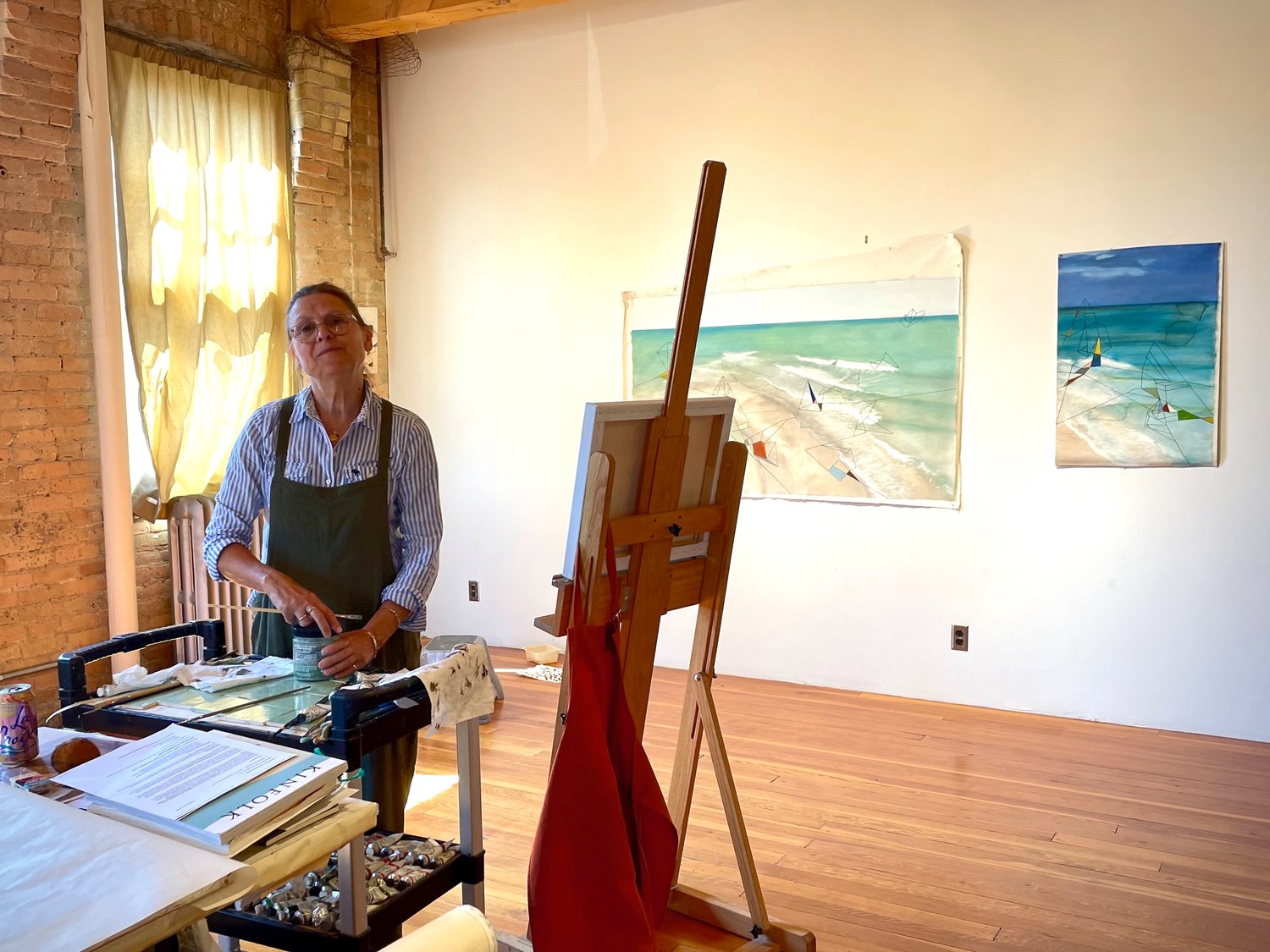 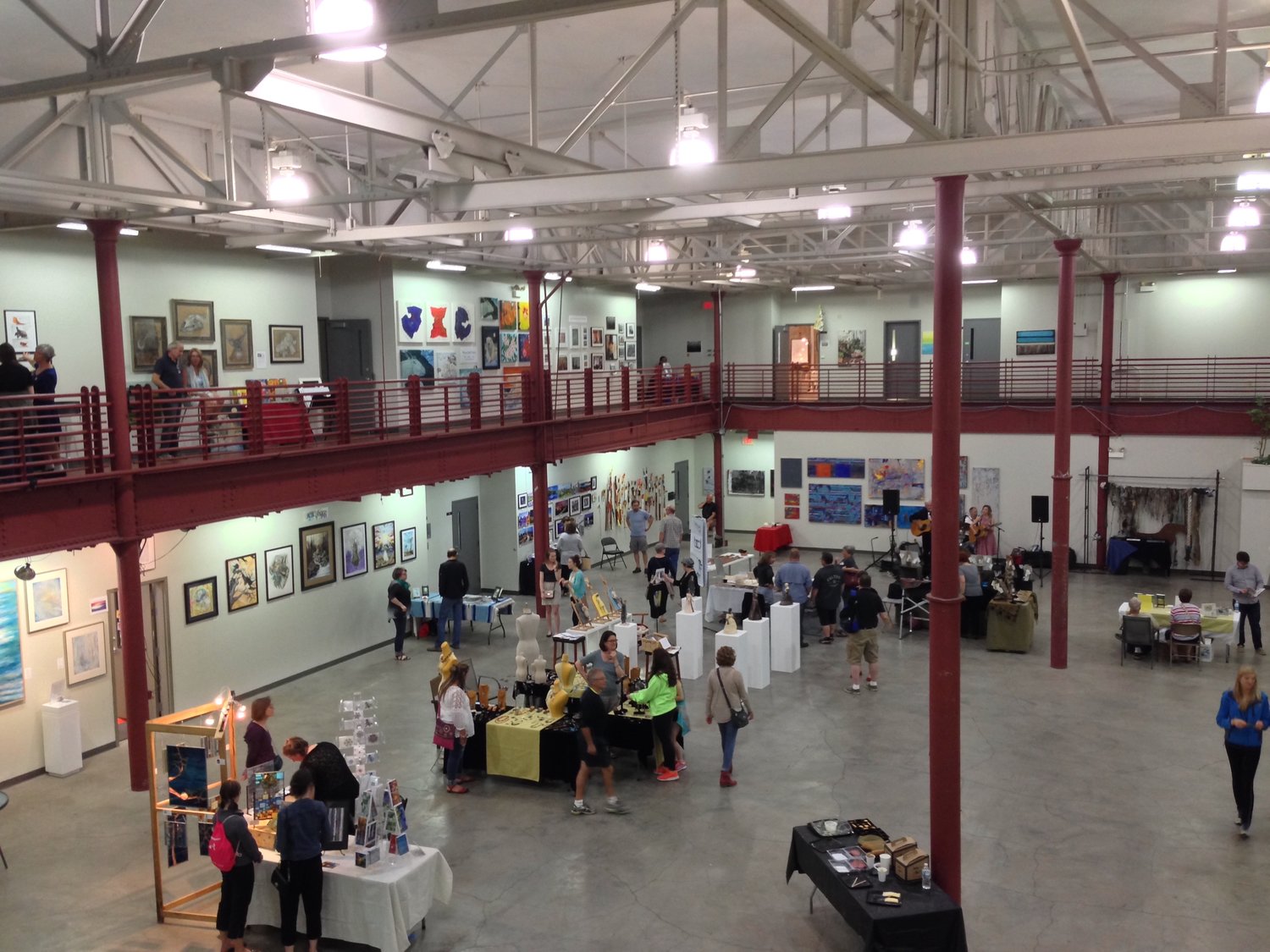 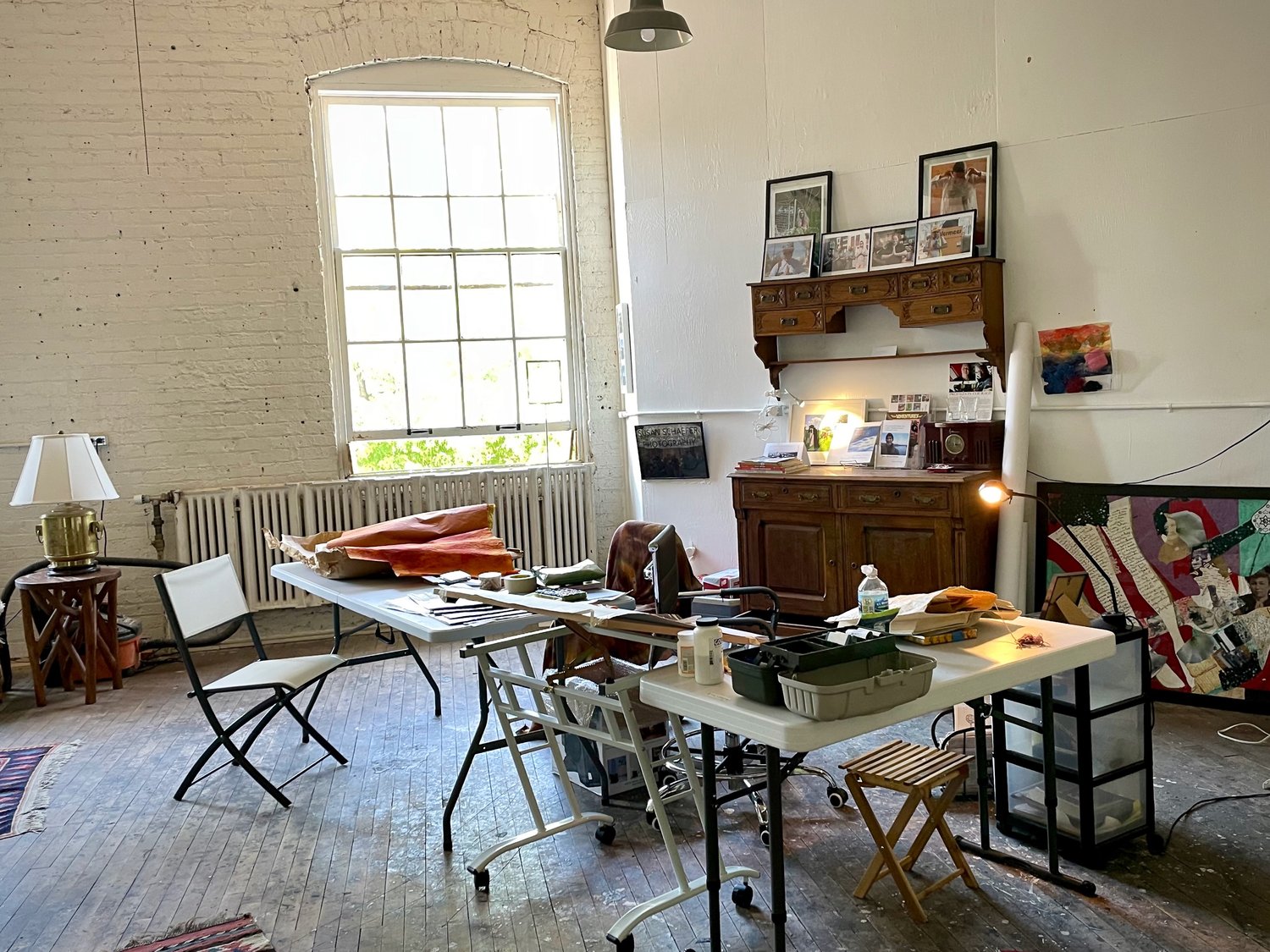 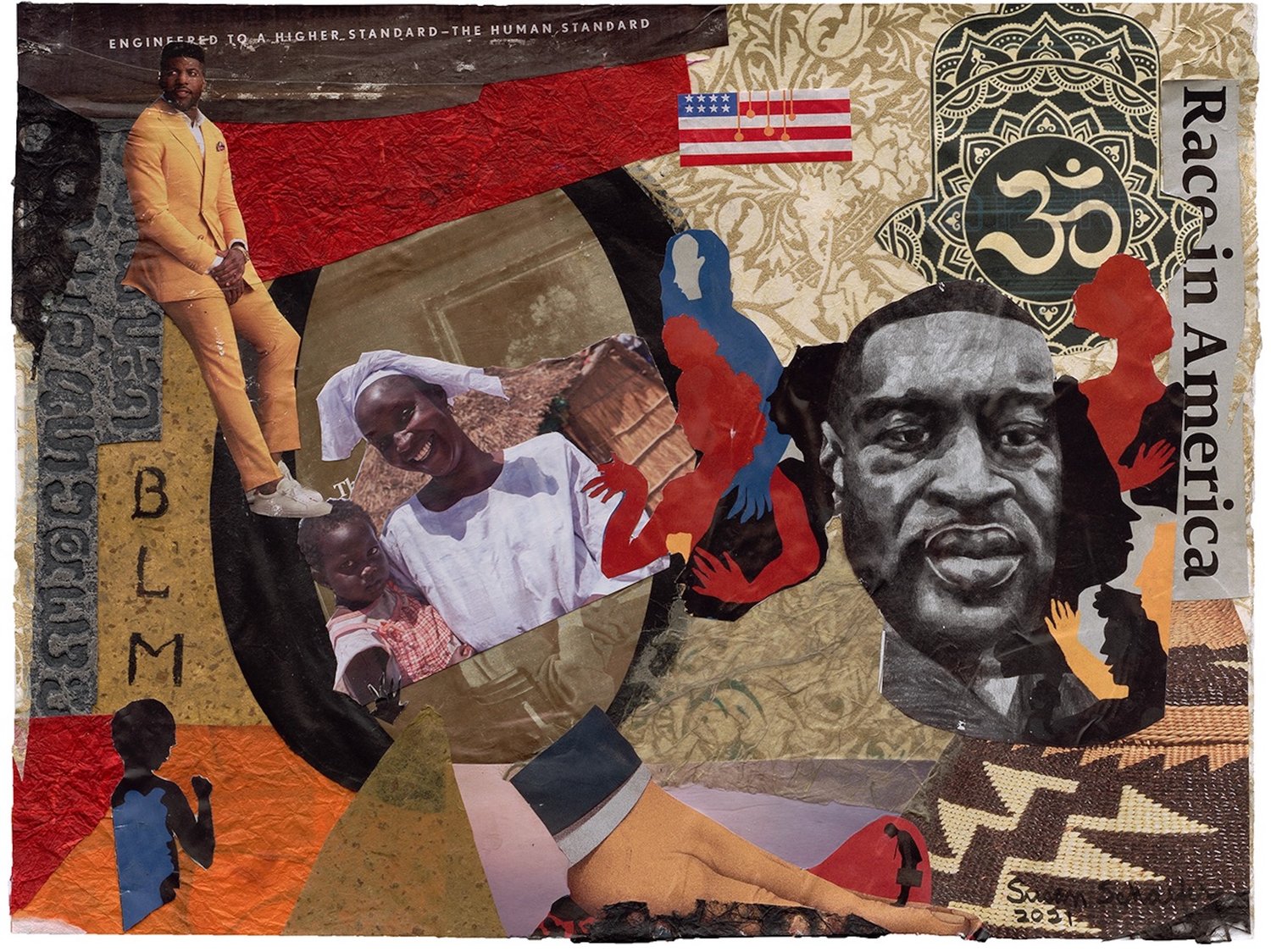 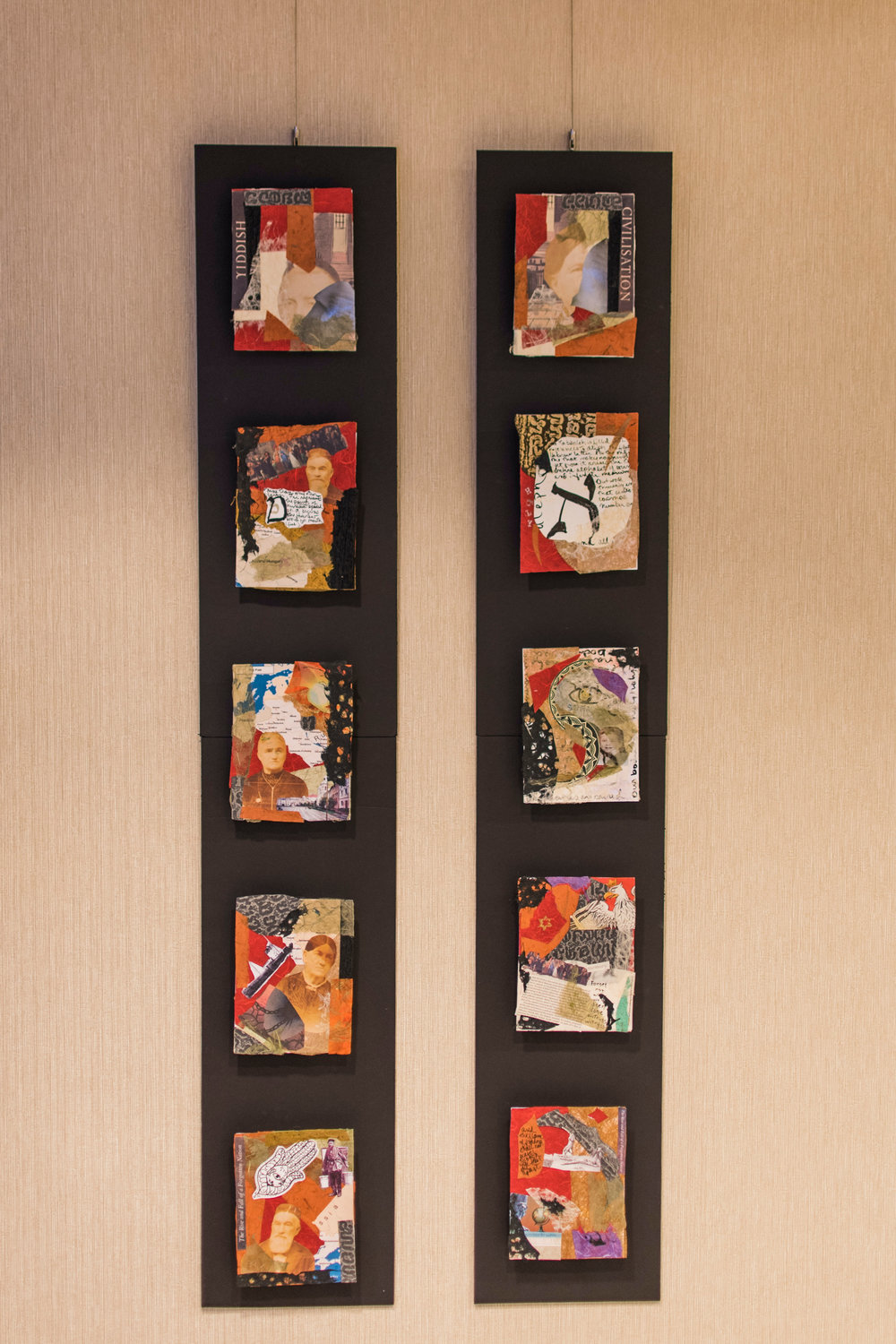 Art-A-Whirl spans neighborhoods
and disciplines
Whatever corner of the Twin Cities you live in, chances are you or someone close to you has participated as an artist or a guest in what Anna Becker, executive director of the Northeast Minneapolis Arts Association (NEMAA) calls our “rite of spring” – Art-A-Whirl.
The three-day happening has been heralded as the biggest open studio tour in the United States with tens of thousands of visitors attending past events.
Shuttered for the past two years due to the pandemic, this year’s event took place on May 20-22, 2022, and the artists were primed and ready to throw out the welcome mats. Even with COVID-19 variations continuing to mutate and spike, many of NEMAA’s more than 1,000 members, housed in over 60 locations in a defined geographic area, were cautiously optimistic about this year’s turn out.
Past NEMAA president, Carmen Gutierrez-Bolger, who shares her studio in the Casket Arts Building with two fellow artists, said the artists she spoke to were enthusiastic about returning to an in-person event. “To be honest,” she stated, “almost everyone has had COVID. This year many are cautious about not serving food, but many, including my studio, are not masking.”

Art-A-Whirl’s origins
In 1995, a group of determined artists set up studios in Northeast Minneapolis’ neglected factory buildings. These art pioneers then decided it would be good for the public to see (excuse the Hamilton pun) “the room where it happens,” so they organized the first open studio tour. A few years later, the growing group formed NEMAA as a non-profit entity. Through diligent collaboration and savvy marketing, Art-A-Whirl, now marking its 27th year, grew in popularity, becoming a nationally recognized art phenomenon.
By 2002, under the leadership of then-president Gutierrez-Bolger, members of NEMAA joined together with the city of Minneapolis, the McKnight Foundation, and local businesses to establish the formal geographical area now known as the Northeast Minneapolis Arts District. In fact, those efforts have been a model for many other Twin Cities’ neighborhood branding efforts, including those served by our community papers. Colorful flags on light posts now demark many communities.

Astonishing economic impact of the arts
In the early 1990s, even before NEMAA formed, as chair of the Greater Minneapolis Chamber of Commerce’s respected Leadership Minneapolis Program™, I established the creative class sub-committee of the chamber’s public affairs group. We invited author Richard Florida as a guest speaker to discuss his groundbreaking book, “The Rise of the Creative Class.” Along with colleagues from the newly dubbed creative industries including architecture, public relations, advertising, design and landscaping, our sub-committee hosted guest speakers and special events, providing new perspectives and data about how significantly creativity impacted local economy. We understood how important it was to engage business leaders around the arts.
Our efforts can be linked to the adoption almost two dozen years later by the city of Minneapolis of the Creative Vitality Index (CVI), an economic measure developed by a Western States Arts Federation (WESTAF), used to weigh in on the ever-increasing contribution of arts and culture to our population.
Minneapolis even developed a sort of “Culture Czar,” Gülgün Kayim, who is Director of Arts, Culture & the Creative Economy, and whose small but mighty staff helps to develop arts and culture policy, and to research the economics of the creative sector.
Pre-pandemic, the economic impact of the creative arts in Minneapolis astonished. The 2018 CVI estimated that the arts contributed $5 billion in sales, or 9.2 times that of Minneapolis’ sports sector, earning our region a lofty place as a national creative mecca. Post-pandemic, the news is grim. Statistics from the Minneapolis Creates website state: “A 2020 study by Americans for the Arts showed that 62% of artists and creative workers were fully unemployed, while 95% reported income losses. Also in 2020, the Minnesota Council for Nonprofits projected that up to 60% of the state’s nonprofits, many of them arts and cultural organizations, would close by the end of the year.”
Thankfully, culture, art and artists are resilient, and Art-A-Whirl bravely reopening its doors this year serves as a notable link to our region’s robust art and culture legacy.

The Legacy Amendment: guaranteeing 10,000 lakes and studios
What are the other factors for Minnesota and the metro area’s rarified arts and culture environment? Meet the Clean Water, Land and Legacy Amendment, aka the Legacy Amendment, passed in 2008 by Minnesota voters and enshrined in the Minnesota Constitution.
The full amendment concerns overall quality of life in the Land of 10,000 Lakes, protecting drinking water sources, wetlands, prairies, forests, and fish, game, and wildlife habitat, lakes, rivers, streams, and groundwater, supporting parks and trails, and preserving arts and cultural heritage. Yes, there was quite a lobby in place to get that included in the long list of natural habitat initiatives.
One leader of this arts lobby is Minnesota Citizens for the Arts, a super smart 901 (C) (4) umbrella lobbying organization that represents with verve, vim and vigor the highest interests of: 695 performing arts, 262 multipurpose arts, 232 history and historical preservation, 156 visual arts and architecture, 49 media and communications, 30 literary, 10 humanities, and 167 miscellaneous arts organizations that represent Minnesota’s 1601 recognized creative entities! They continue the good fight to ensure arts and culture has a “lifebuoy” amidst all that water.
The Legacy Amendment increased the state sales tax by 3/8 of 1% beginning July 1, 2009, continuing until 2034. The additional revenue is distributed into four funds: 33% to the clean water fund; 33% to the outdoor heritage fund; 19.75% to the arts and cultural heritage fund; and 14.25% to the parks and trails fund.
Based on current sales tax revenue, this means Minnesotans will invest more than $1.2 billion in arts and cultural heritage fund projects and programs over the 25-year life of the tax with a portion made available through grant programs.

What does it all mean?
As a practicing artist, I have participated in diverse aspects of Minnesota’s arts and culture largesse. For example, in 2016, as a NEMAA member, I hosted a highly successful Art-A-Whirl photography exhibit in the Grain Belt Brewery Annex, interacting with hundreds of visitors over the three days of the event.
That year I was also accepted into the prestigious St. Catherine University Women’s Art Institute (WAI) Summer Studio Intensive. Like many arts programs, the WAI benefits from Minnesota’s support of the arts. Happily, my 10-panel collage, “Recollection: My Lost Yiddish Civilization,” incorporating archival family documents and photographs, ink drawings on fine art paper, and newsprint earned a nice spot on a wall in the University of Minnesota’s Regis Center for Art’s Quarter Gallery where our group show was held. UMN also benefits from the state’s arts funding.
More recently, working from a light-filled studio in the Thorpe Building, I produced my collage titled, “Engineered to a Higher Standard,” in response to the murder of George Floyd and the Black Lives Matter movement.
Each of these activities has a lifeline directly connected to Minnesota’s commitment to the arts.
But I am more than a practicing visual artist. I am also a journalist dedicated to shining a light on how creativity contributes to human wellbeing.
It is worthwhile to remember that behind Minnesota’s economic arts’ statistics toil humans whose creativity and innovation fuel this so-called creative class. Frequently laboring for the sheer love of their craft, many visual and performing artists, directors, inventors and innovators produce from an inner creative core more likely fueled by passion than personal gain. These makers are marked by an almost holy drive to create – and when their artistry and intent collide, it often yields something extraordinary in its wake.

Something under the hood is not immediately apparent or obvious. This column will uncover stories that span the neighborhoods covered by TMC Publications. Susan Schaefer is a widely published independent journalist, creative writer, and poet. Her articles appear in the Minneapolis Star Tribune, PBS’ online magazine, Next Avenue, Next Tribe, and beyond. She was columnist and features writer for Minneapolis’ Southwest Journal and Minnesota Good Age magazine.

Creativity and community in a time of Isolation

From the ‘Hood to the Woods