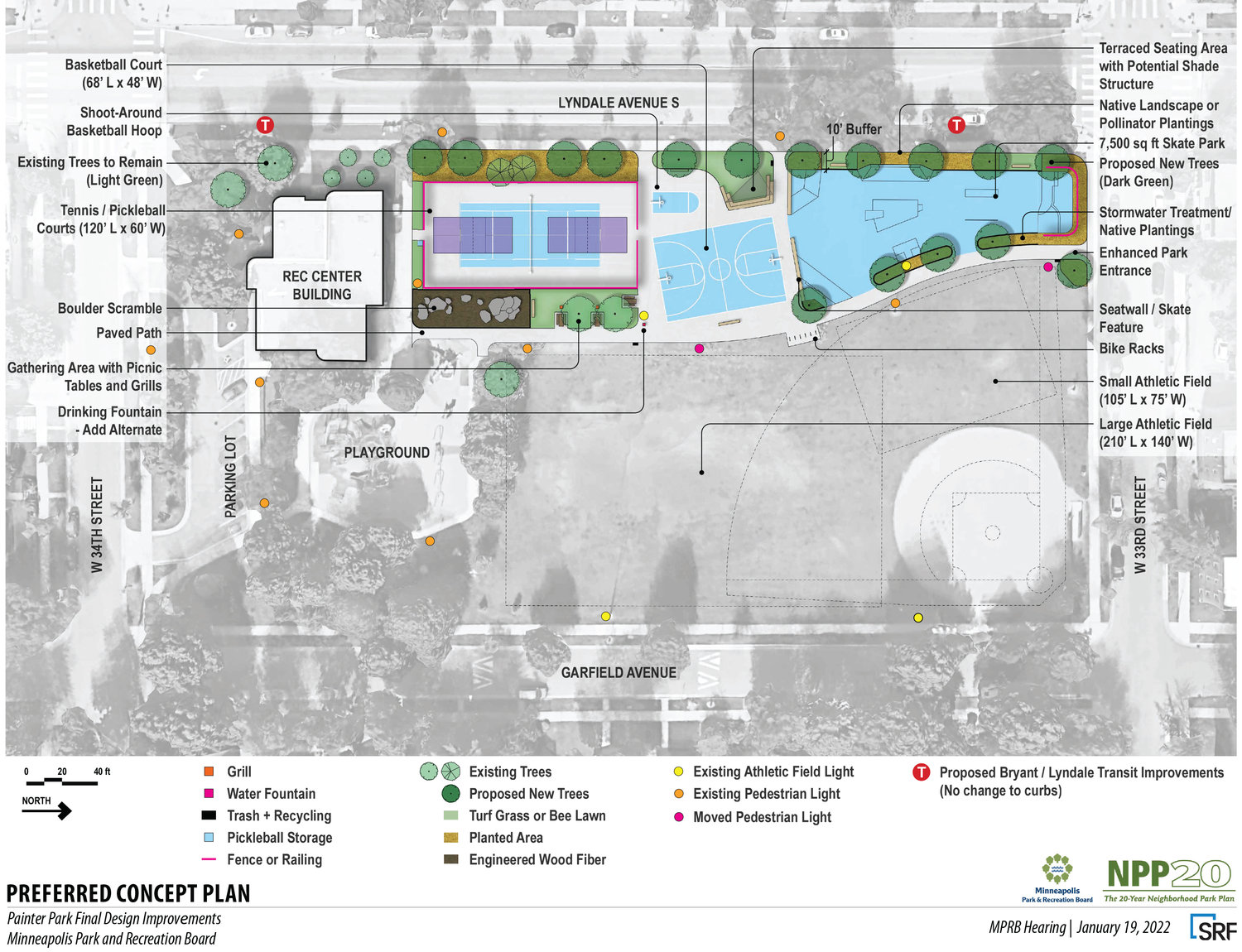 In 2023, there will be a new street-style skate park and bounder scramble area at Painter Park. A basketball court will be added, and the tennis/pickleball courts will be improved. Work will start late this summer, according to Minneapolis Parks and Recreation Design Project Manager Andrew Schilling.
The 2.95-acre park at 620 W. 34th St. is part of the old Lyndale School site. It was acquired by the Minneapolis Parks and Recreation Board in 1976 when playing fields, playgrounds, tennis courts and a recreation center were built.
As with the other two sites, the park board paid for the land with money it had received from the state department of transportation for park land taken for freeways in the 1960s and 1970s. The park is named after Jonathan Painter, the first industrial arts teacher in the Minneapolis school system who created the industrial arts curriculum in city schools.
There is money available through the capital improvement program to do the first phase of work at Painter Park. “The area of the master plan that included the tennis court (with pickleball striping), basketball court, new skate park, gathering spaces and other improvements fit the available budget and were a priority from staff and community input,” remarked Schilling.
When asked, community members said that basketball is very popular, and they appreciate the open space, and they want a playground with shade, pointed out Schilling. They want a space that is inviting for people of all ages.
They expressed concern about aging courts and infrastructure, not enough shade, not much space for native groundcover versus turf, and balls rolling into the street due to the close proximity to Lyndale.

How did you reach out to
community members?
AS: Our community engagement is focused on the development of a concept plan that our board then considers for approval. The engagement for this project took place from spring 2021 through late fall.
Beginning in spring of 2021, we worked with the neighborhood organizations (Lyndale and South Uptown) to introduce the project and to develop and share a community engagement plan. We had an outdoor open house at Painter Park in July (with ice cream), in park pop-up meetings to meet users using the park in August, two online surveys, a second community meeting in October to consider two concept layouts, a skate community-specific meeting to refine skate elements – all to inform the preferred concept plan.
The Board approved the concept plan for Painter Park on Feb. 2, 2022. Since that point we have been working on producing construction documents to advertise for bid.

What will the park changes include?
AS: We received good guidance and direction from the Southwest Service Area Master Plan (approved in 2020), community, staff, and other park user engagement, leading to the development of the concept plan. The concept plan focuses on the west portion of the park north of the recreation center, activating an open area near 33rd Street with a new skate park, relocating and improving existing facilities, creating gathering spaces, and greenspace for native or pollinator plantings - specifically:
• Relocated and reconstructed tennis court (with striping for two pickleball courts using portable nets);
• Relocated and reconstructed full court basketball with additional shoot around hoop area;
• New street-style skatepark with some transition features incorporated;
• New boulder scramble area (youth play and informal seating area);
• New picnic and terraced seating spaces (with shade opportunities where practicable);
• Native plantings and stormwater treatment spaces, and;
• Improved pathway circulation and locations of pedestrian lighting within the project area.

What is the budget and where will the funds come from?
AS: The total project budget is $1,073,000 with approximately $880,000 available for construction. Funds are a combination of NPP20 and neighborhood park dedication.
Pending favorable bids received in May, it is anticipated that construction will begin late summer with project completion sometime in summer 2023.