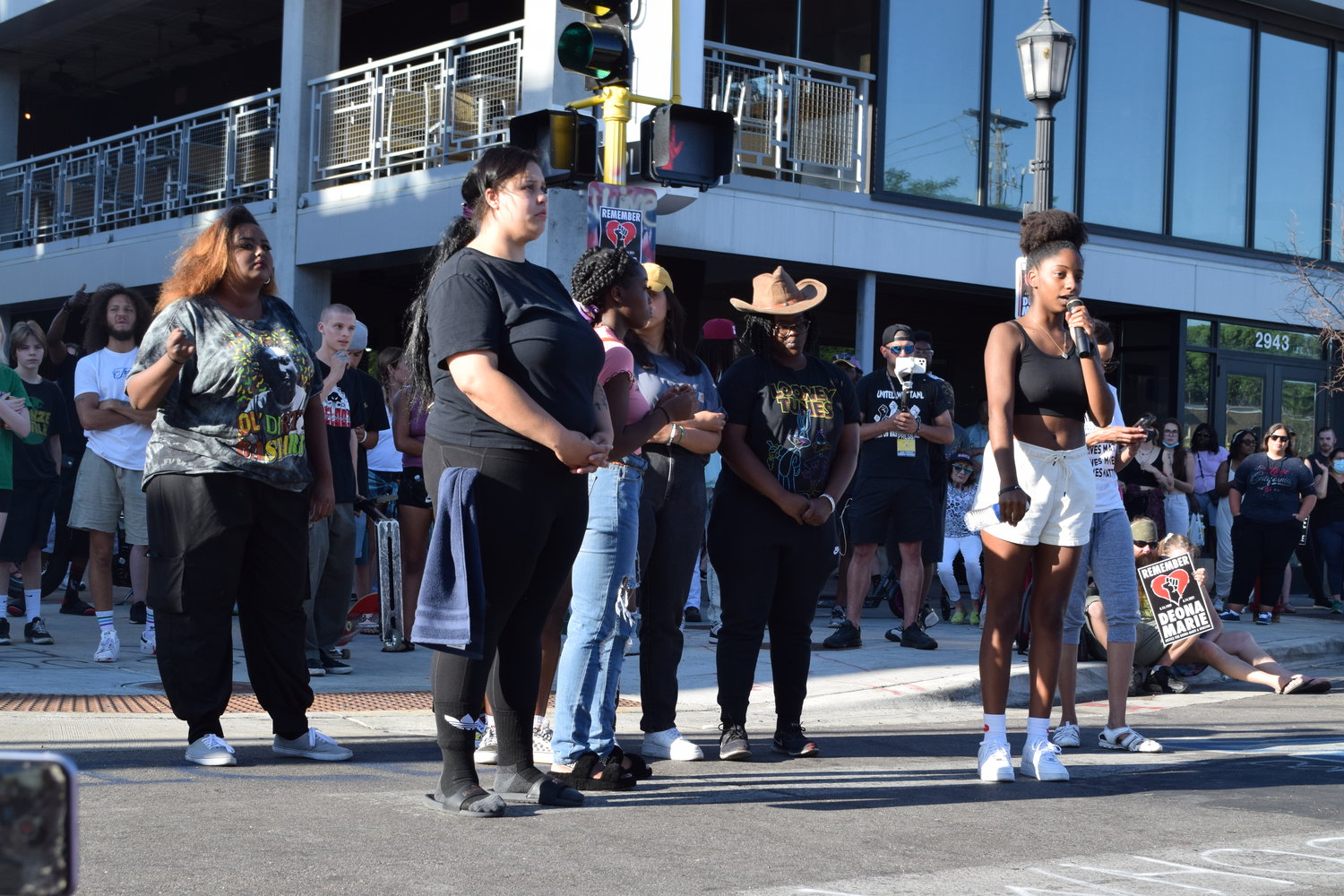 On June 14, youth activists speak to the trauma experienced after witnessing the driver barreling through the protest and killing Deona Marie Knajdek the previous night. (Photo by Jill Boogren) 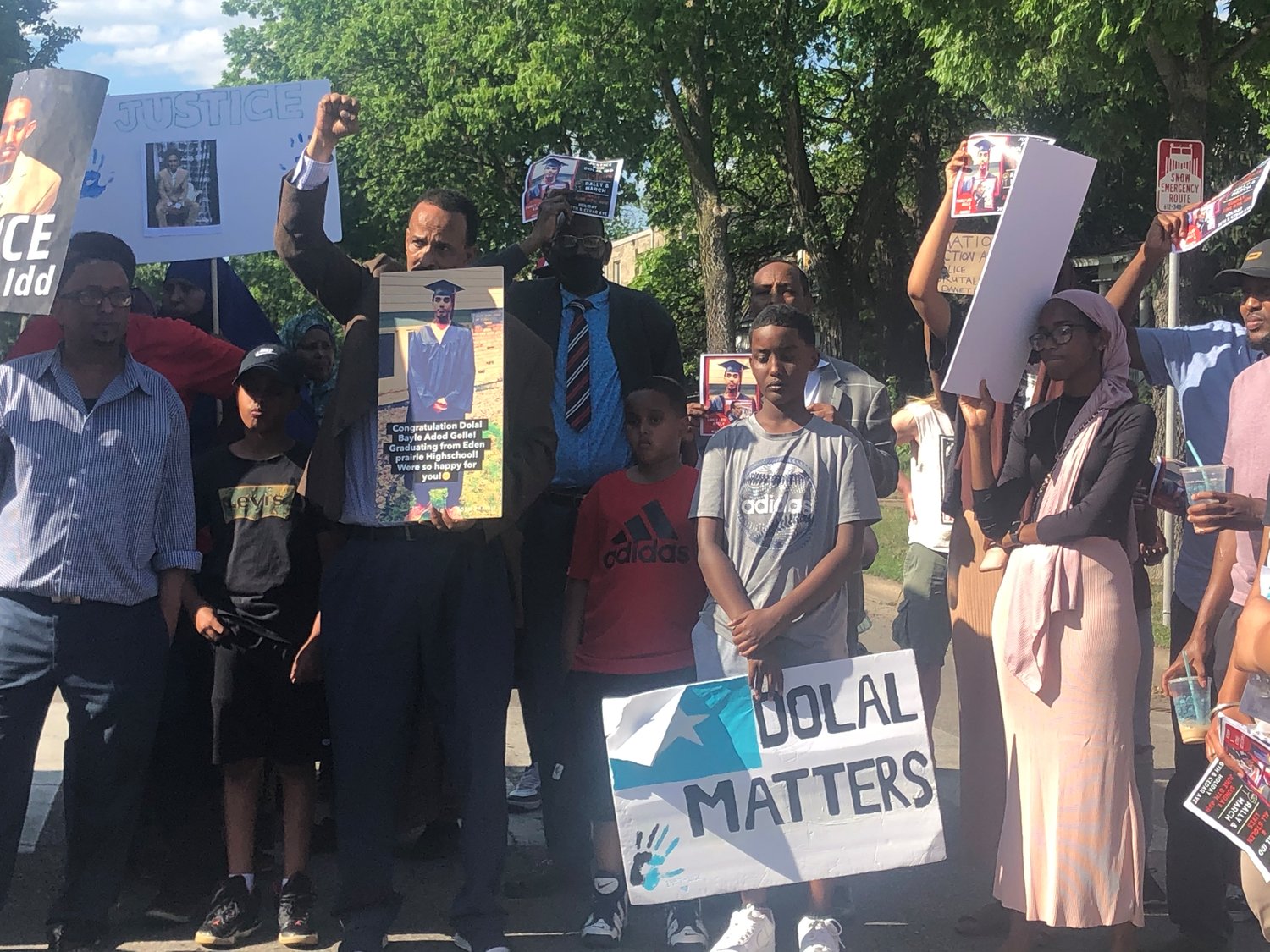 Bayle Gelle, Dolal Idd’s father (center left, with fist raised), stands with family members and supporters during a march on June 6, 2021 demanding answers into the killing of his son by Minneapolis police at the Holiday Station Store along Cedar Ave. (Photo by Jill Boogren) 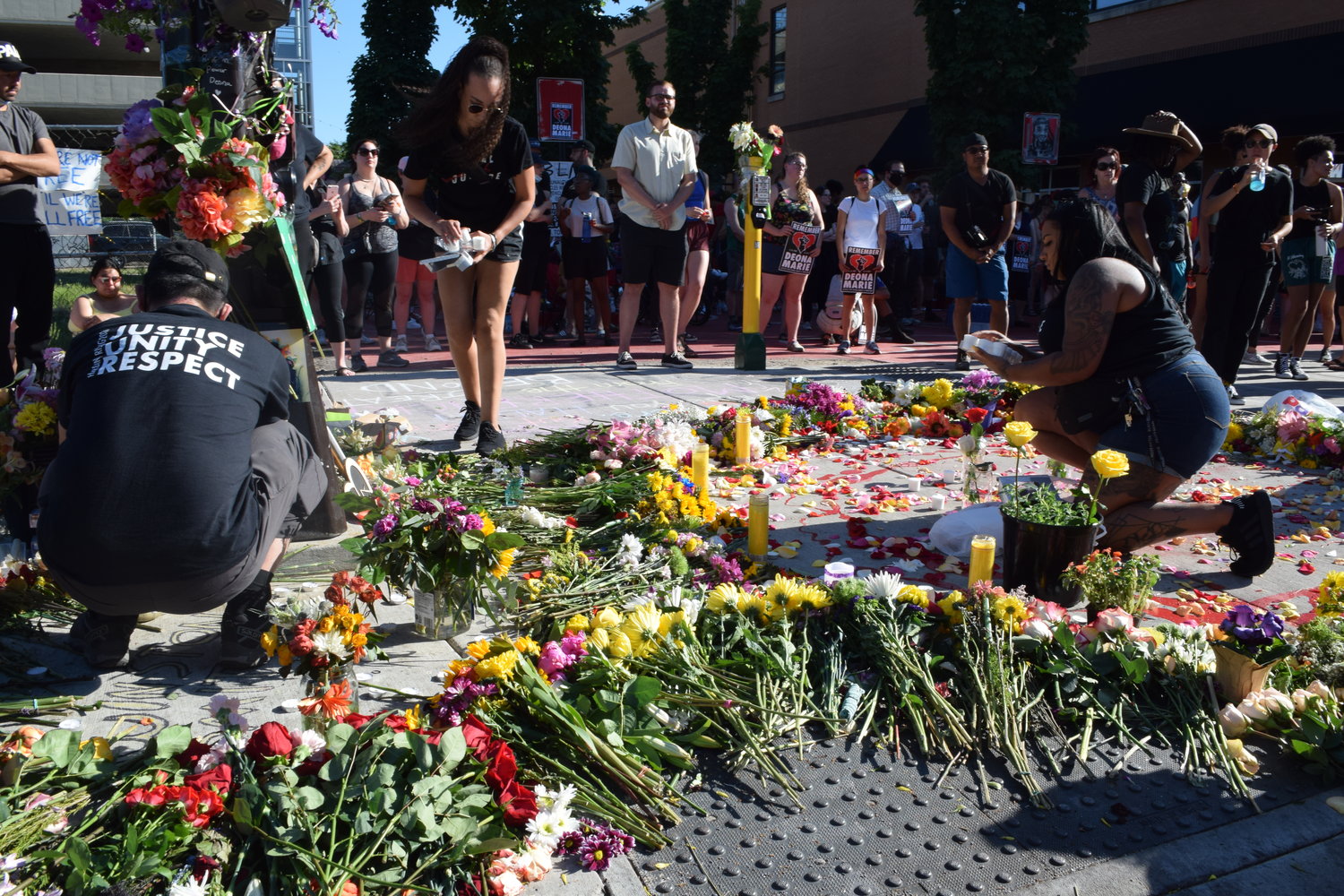 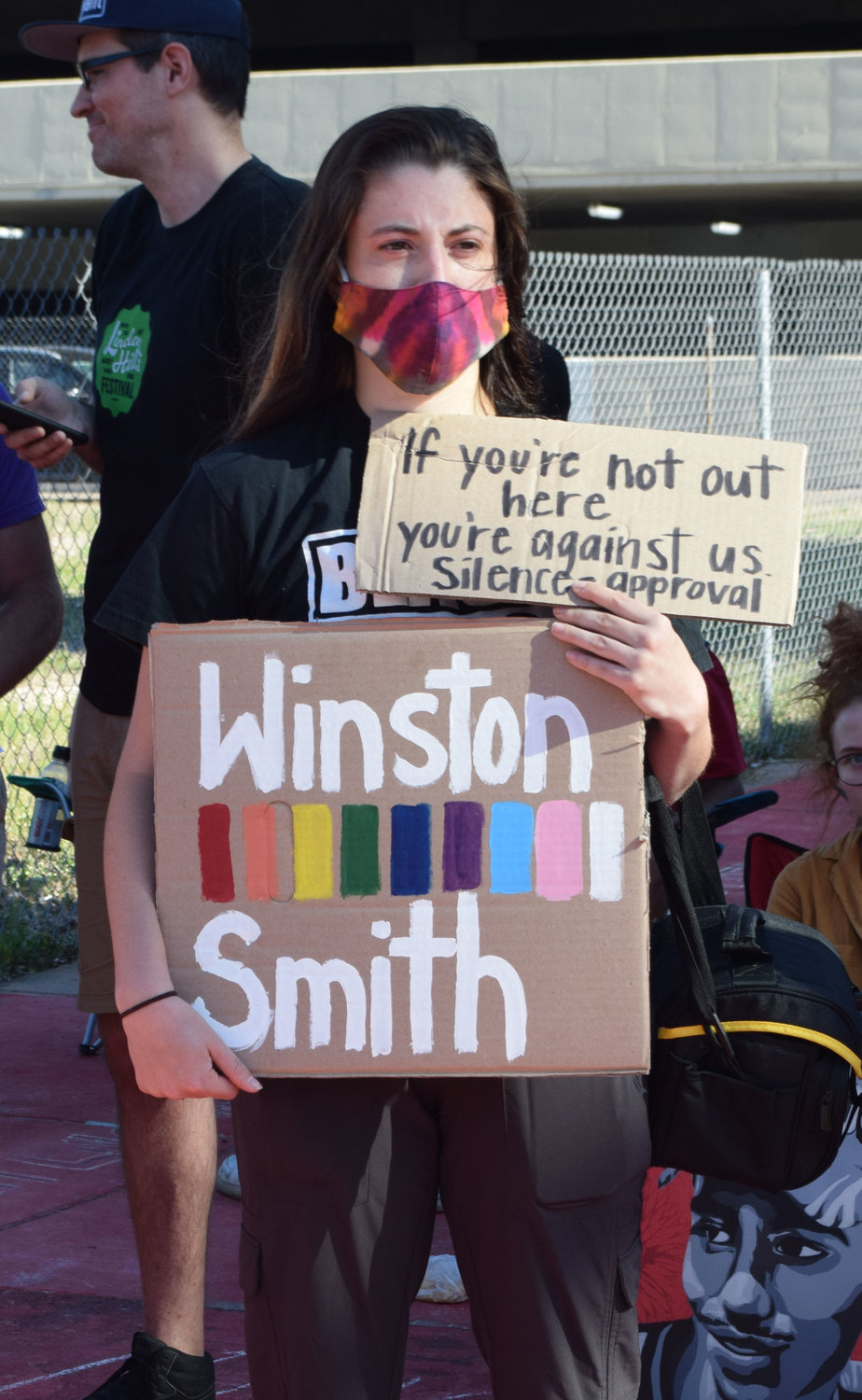 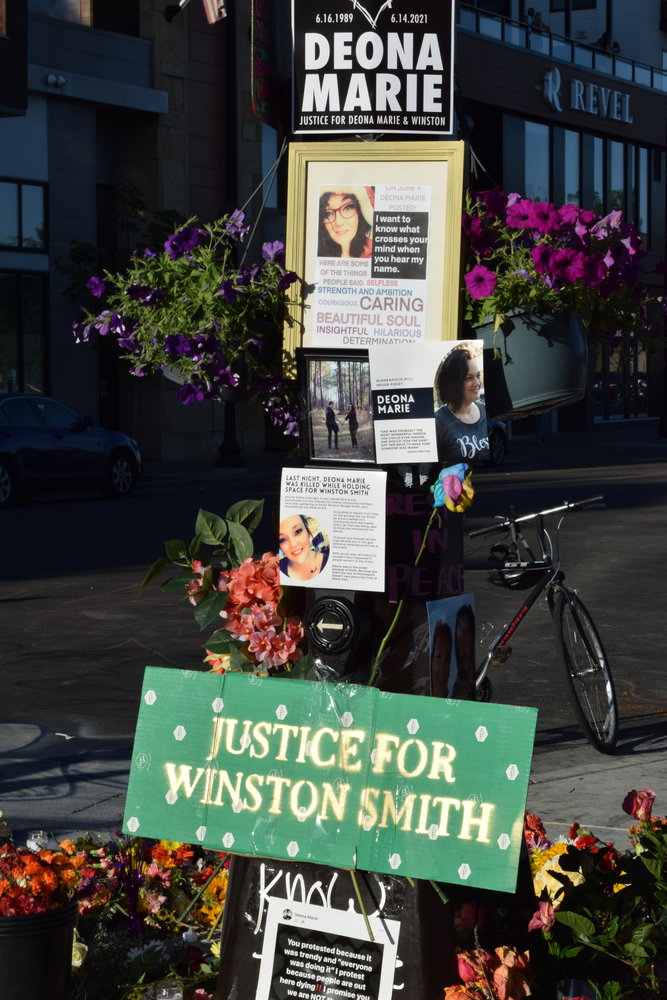 Another petition to amend the Minneapolis city charter is being circulated that would place control of the police directly into the hands of the people by establishing a Civilian Police Accountability Commission (CPAC). “CPAC is the idea that the people who live in a community should be able to determine how it is policed,” according to Minneapolis for Community Control of Police, a coalition of organizations advancing CPAC.

Right now there are two other charter amendment proposals in front of the Charter Commission – one proposed by City Council members, the other brought through a public petition process by Yes 4 Minneapolis (Y4M) – both of which would create a department of public safety and give greater oversight to the City Council.

Those two amendments and the CPAC amendment all remove the requirement for Minneapolis to have a minimum number of officers, but that’s where the similarities leave off. CPAC would create a democratically elected local commission of 13 members who would have decision-making authority over the police. The commission would be responsible for setting policies and procedures, establishing the budget and negotiating contracts, as well as investigating potential misconduct and taking disciplinary action. They would have the ability to hire and fire police and refer cases for prosecution where necessary.

While the deadline to get CPAC on the ballot this year has passed, organizers are working to put it to voters next year. To appear on the ballot, the petition must be signed by at least 12,000 registered Minneapolis voters and signatures approved. A majority of votes are required for the measure to pass.

Those interested in learning more are invited to attend CPAC 101 sessions:

As the U.S. Department of Justice (DOJ) conducts its investigation into the use of force by Minneapolis police, Communities United Against Police Brutality (CUAPB) is inviting people to share their stories and ideas, to ensure the DOJ gets as much information as possible about people’s experiences with the Minneapolis Police Department (MPD). (See column on page 4.)

According to Attorney General Merrick B. Garland, the DOJ investigation will assess whether MPD engages in discriminatory policing and will review all types of force used by MPD officers, including force used against people with behavioral health disabilities as well as against protesters exercising their First Amendment rights. Ideally, according to CUAPB, the DOJ will issue a consent decree – a list of changes the city would be required to follow.

CUAPB is hosting several sessions at 6 p.m. on each of the following nights for people to give input. Dinner will be served, and guests are asked to bring a chair or blanket.

People can also contact the DOJ directly to tell their story. Call 866-432-0268 or email community.minneapolis@usdoj.gov.

On June 3, just hours after the city of Minneapolis removed its barricades from George Floyd Square, law enforcement officers killed another Black man in Minneapolis.
His name was Winston Boogie Smith, a 32-year-old father and comedian and former Roosevelt High School student. Smith was fatally shot at the top of a parking ramp in Uptown by U.S. Marshals, allegedly operating within the “North Star Fugitive Task Force” in cooperation with county authorities.
The site of W. Lake St. and Girard Ave. S. quickly became a place of mourning and protest, expressions shared at an intersection blocked to traffic as demonstrators demanded answers. Among other messages, street art and signage read: “Winston Smith was Assassinated,” “Stop the Cover Up,” and “Release the Footage.”
Racial Justice Network (RJN) issued a list of questions on June 5, including whether Mayor Jacob Frey, Minneapolis Police Chief Medaria Arradondo and other law enforcement authorities signed off on the action, what the terms of the Memorandum of Agreement (MOA) between this task force and local government were, why the task force was allowed to operate without body worn cameras, and why the task force placed people in unnecessary danger by trapping and ambushing Smith in a parking lot in a busy part of Uptown.
“The lack of transparency in the MOA allows all of these agencies to escape responsibility for lying, their faulty decision-making and devaluing of Black life,” said Nekima Levy Armstrong, civil rights attorney and founder of RJN.
Similar questions are still being asked about the fatal shooting on Dec. 30, 2020, by Minneapolis police of Dolal Idd, which took place at the busy Holiday gas station at 36th St. and Cedar Ave. and for which complete body worn, squad car and surveillance camera footage has not been released (the footage that was released is brief and lacks context as to what occurred before shots were fired).
Idd’s father, Bayle Gelle, said at a June 6 march he recently learned that the investigator assigned to the case through the Dakota County Attorney’s Office had retired, and the case sat idle for months. Gelle, with family members and supporters, continues to seek answers into his son’s death and the raid by law enforcement of their family home later that same night which turned up no evidence.

Protester killed
Another life was taken Uptown, that of 31-year-old Deona Marie Knajdek, who was attending a protest on behalf of Winston Smith on the night of June 13. She was killed when a driver, Nicholas Kraus, barreled into a vehicle blocking the intersection, which then hit her.
As people gathered for a vigil for Deona Marie the following day, several youth who were there when Kraus drove through took turns with the microphone. Visibly shaken and fighting off tears, they spoke to the trauma this caused, being scared by loud noises and losing sleep. One activist told the crowd to be mindful of how the media would spin the narrative, and smear their names while giving White supremacists grace.
“Everyone here needs to spread the truth of what really happened. This man was sober, it was intentional. He got out... he was smiling, he was smirking at us. He stopped at the red light down there, and one of our best friends tried to wave him away, and then he accelerated through,” they said. “So just know that this was intentional.”
Despite Mayor Frey referring to the incident in a press conference as a “car accident,” Kraus has been charged by the Hennepin County Court with second degree murder, “with intent to effect the death of that person or another, but without premeditation,” and two counts of second degree assault for injuring two others using a dangerous weapon.
As demonstrators remained on site, police in riot gear disrupted the peaceful protest, slashing tires, towing cars and making targeted arrests. No dispersal orders were given, even after assurances by the mayor that those would be issued and people would be given an opportunity to leave.
Calls for answers – and justice – continue.