It takes a village to save a guitar program 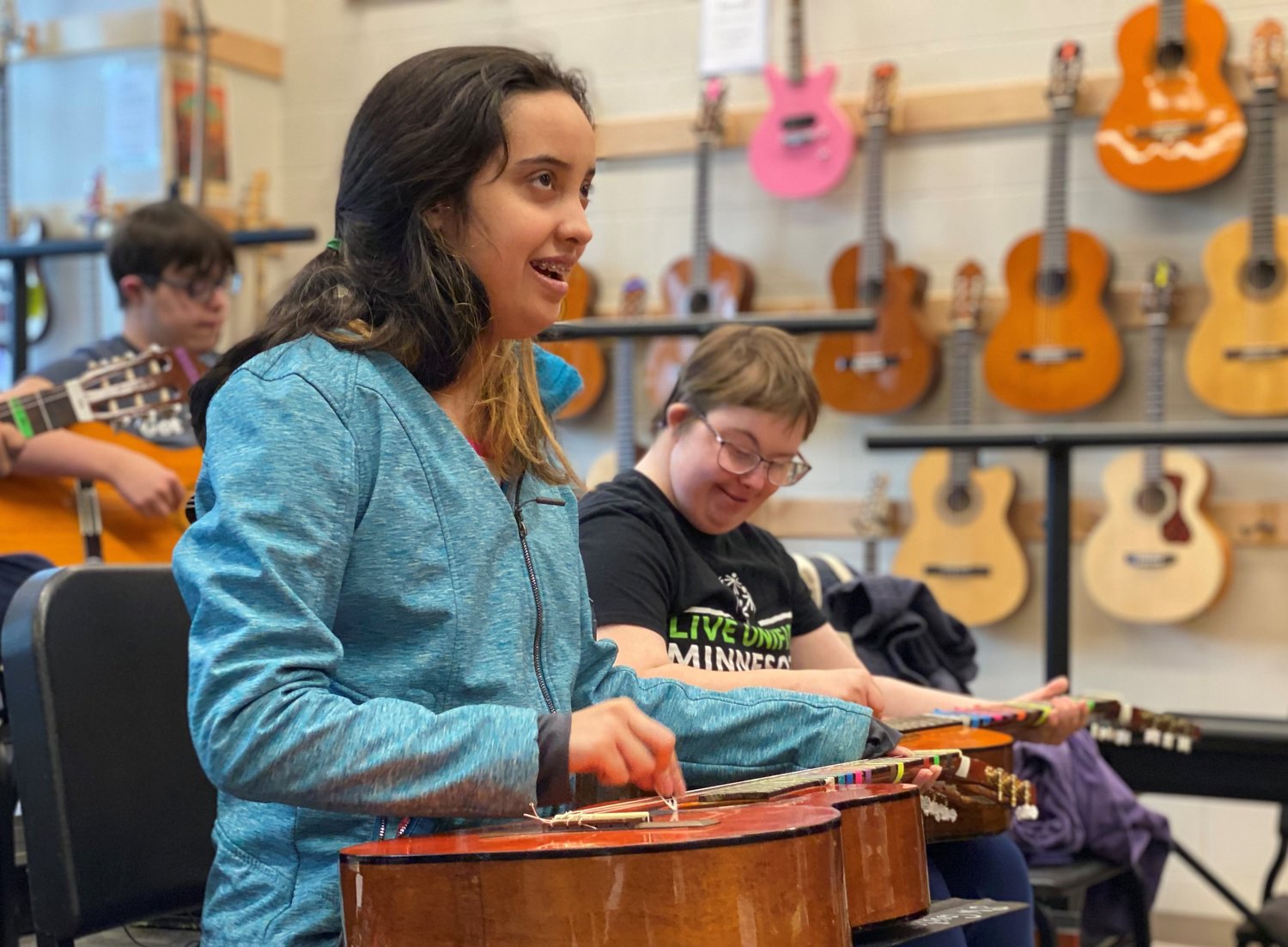 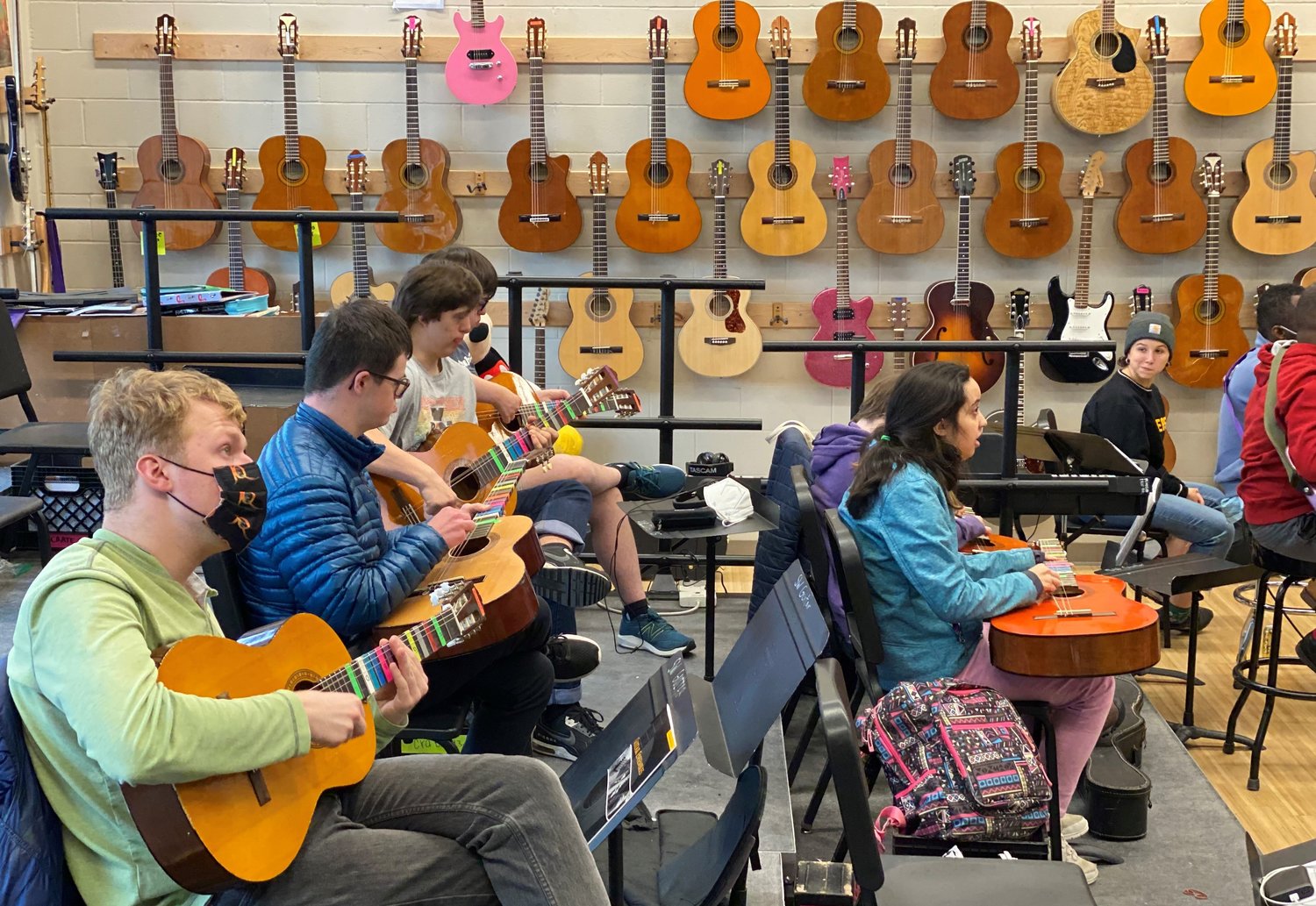 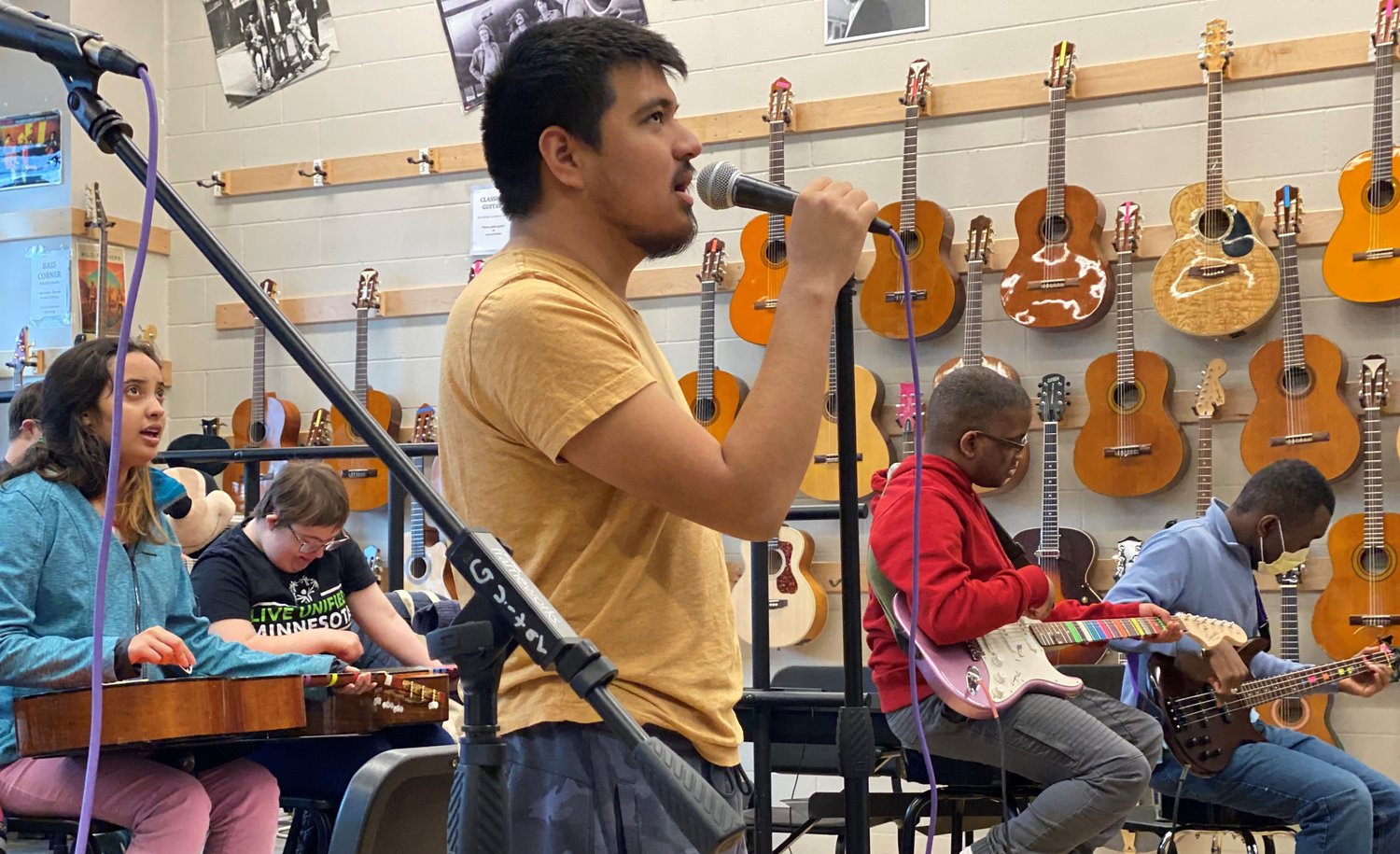 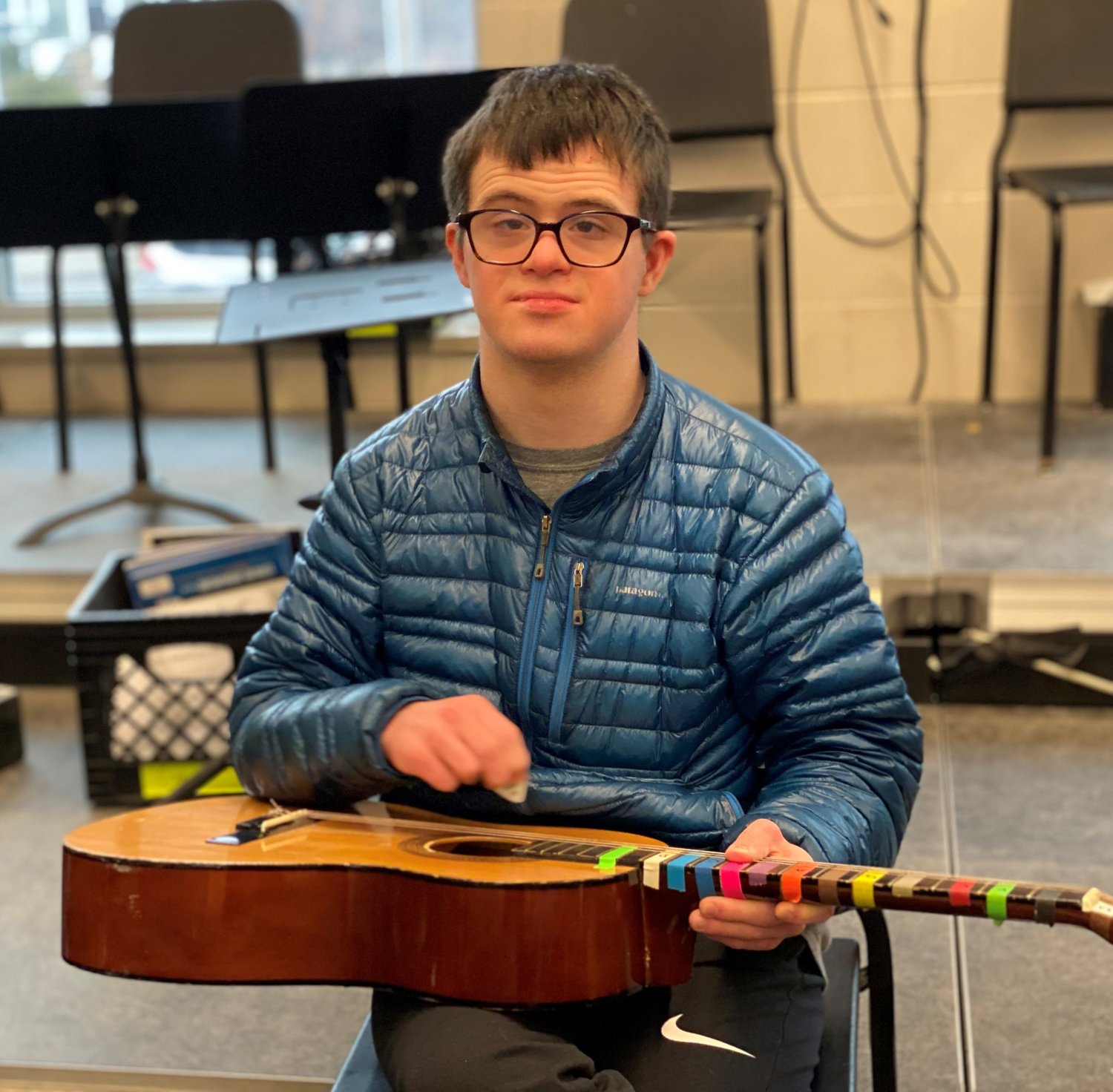 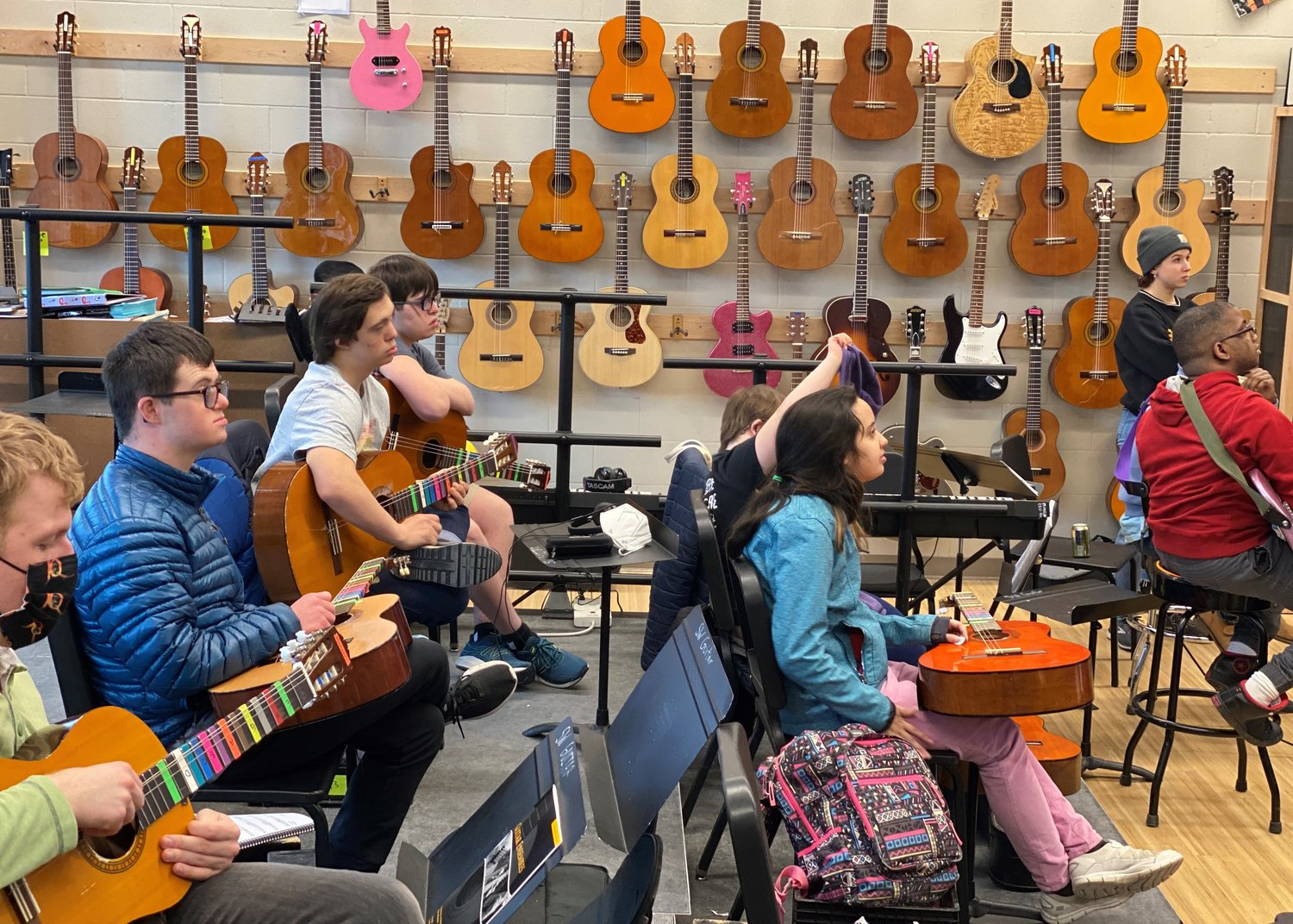 NEWSFLASH! It was touch and go for a few days, but the one-of-a-kind Southwest High School guitar program is NOT being eliminated. Yay!! Chalk this one up to “Parental Involvement” meets a “National Outcry of Support” for Ruth LeMay and the Southwest guitar program. It was just enough to block the axe that was falling on one of the most inventive music programs in the country.
The first time I walked into the newly constructed Southwest guitar classroom was also the first time I met Ruth LeMay. This was spring of 2016. I was managing and producing the music stage for the Linden Hills Festival, and I was out recruiting teenage musicians to fill the program. I had drawn from the SW jazz program in years past, but I had just recently become aware of the new guitar program at the Southwest. No one prepared me for what I found there...
A wall of guitars. Thirty, 40, maybe 50 guitars hanging on the wall. AND – a newly hired teacher who was not only passionate about teaching guitar, she was also developing a brand new, inventive approach for teaching music instrumentation to students with developmental disabilities.
Ms. LeMay’s “3 Strings Method” was born of her desire to help these students “get the same music ensemble experience that their neurotypical peers receive.” Using color coding and modified instruments, she invented an entirely new methodology, using adapted guitars, bass guitars, keyboards, drums, and musical notation. Her newly formed 501(c)3 is getting national recognition, and she is now teaching music teachers across the country how to adapt their instruments and use this approach with students of all levels of ability.
As she says on her website, www.3strings.org, “With 3 Strings, students with special needs can make music, be proud of it, sound good, and take it anywhere they want to go – just like anybody else.”
But that’s just one of her passions. “This is about equity, and equal access,” she say. “In the Southwest guitar program, you can start beginning guitar in high school, and graduate at the National Honor Ensemble level.”
But isn’t guitar just all about rock & roll? Ruth laughs. “These kids learn how to read in my class. We read music. And then, sure, we play all styles.”
Including rock & roll. Last summer, several of Ruth’s students performed on the outdoor stage at the annual Linden Hills Woofstock Party-for-Dogs, including a classic-rock cover band called The Disappointments. Five 14-and-15-year-old boys pounded out the electric jams of The Allman Brothers, Elvis Costello, and Lynyrd Skynyrd, while their parents and fans cheered and danced in the streets. Ruth was there, too, of course.
So, how could all this good stuff suddenly disappear? Well... Have you ever heard of “budget cuts?” Have you, umm, heard the news, that our schools are underfunded? Yep.
“My kid couldn’t wait to get to high school, because he couldn’t wait to get into that guitar program,” said Mark Lanie, father to one of the teenage Disappointments. “And then out of the blue came the gut punch that the guitar program was being cut.
“Literally within minutes of getting that email,” he said, “all the boys in the band were writing emails of their own; to the school, to the superintendent, to the governor.”
And it was not just a local outpouring... As a member of the National Guitar Council, Ruth had contacts and admirers all over the country, and they stepped up to the plate, too.
The school got a deluge of emails. And four days after the program was cut, it got reinstated.
“Clearly what happens in the guitar classroom is necessary and valued,” Ruth said. “Students deserve a guitar education - it is a lifelong instrument.”
And there is nothing like being in a band. (This is me speaking.) I LOVE being in a band, something that’s totally new for me, for I didn’t learn how to play music until I was past 50. What I do know, and always have known, is how cool it is to be part of a team. That’s what Ruth gives to these kids.
Quoting from the website again: “Our mission is to train musicians how to adapt instruments and music to create 3 Strings ensembles worldwide.”
Wouldn’t that be nice? Feel free to donate, if you’d like. And one other way to Team Up For Good... If you happen to have a space that you could share, The Three Strings Band, separate from Southwest High School and made up of recent high school graduates, is looking for a practice space. Feel free to contact her directly at Ruth@3strings.org.
And keep teaming up for good!