Educators rally in downtown Minneapolis on March 16, 2022. They have also been at the Governor's Mansion and the Davis Center. 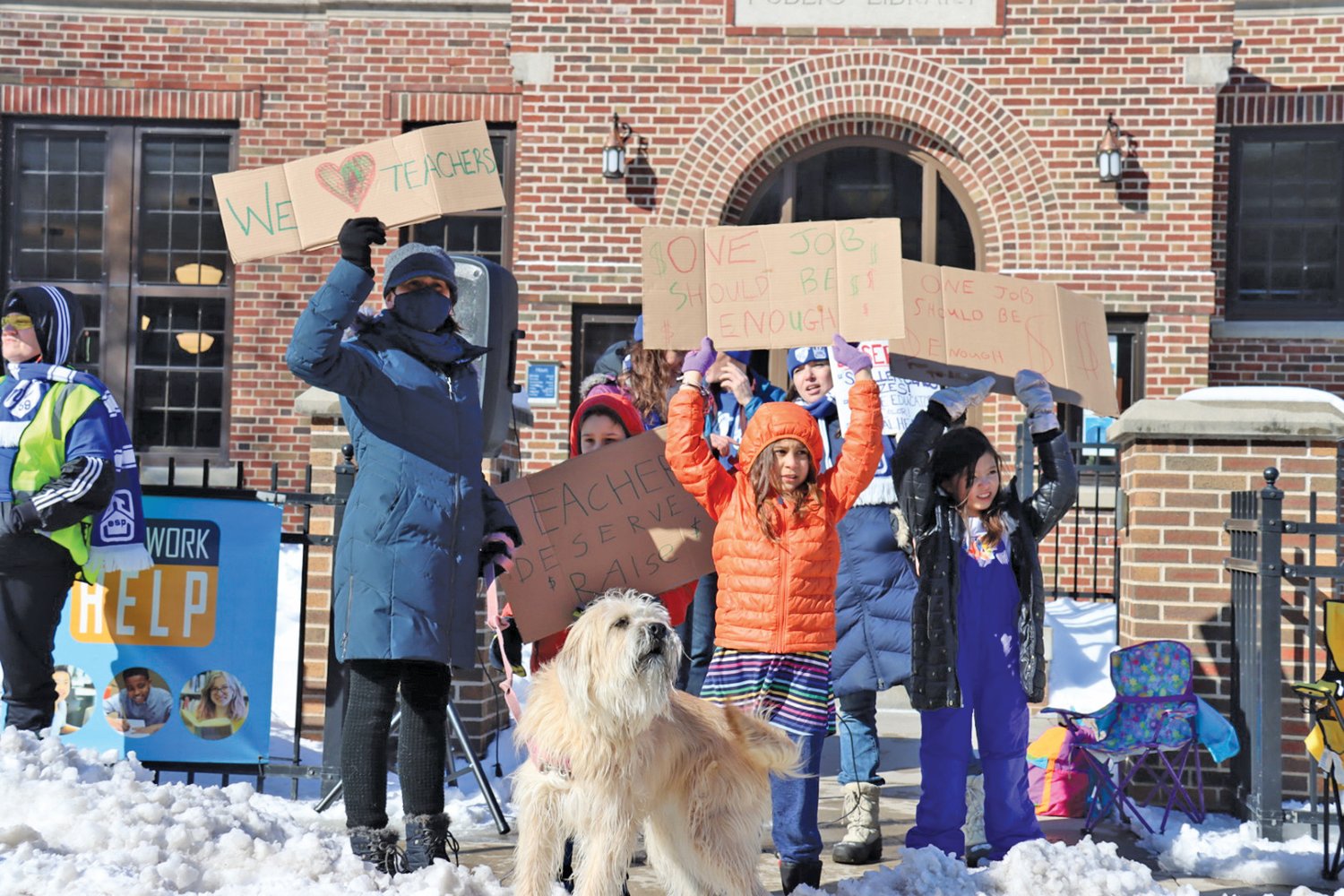 Wendy Ledesma was with children Santiago (age 11) and Noemi (age 9), and Pearl Jones (age 7), students at Green Central, and their dog, Jyn Erso, at Roosevelt on Tuesday, March 8 to stand with educators in Minneapolis. (Photo by Tesha M. Christensen) 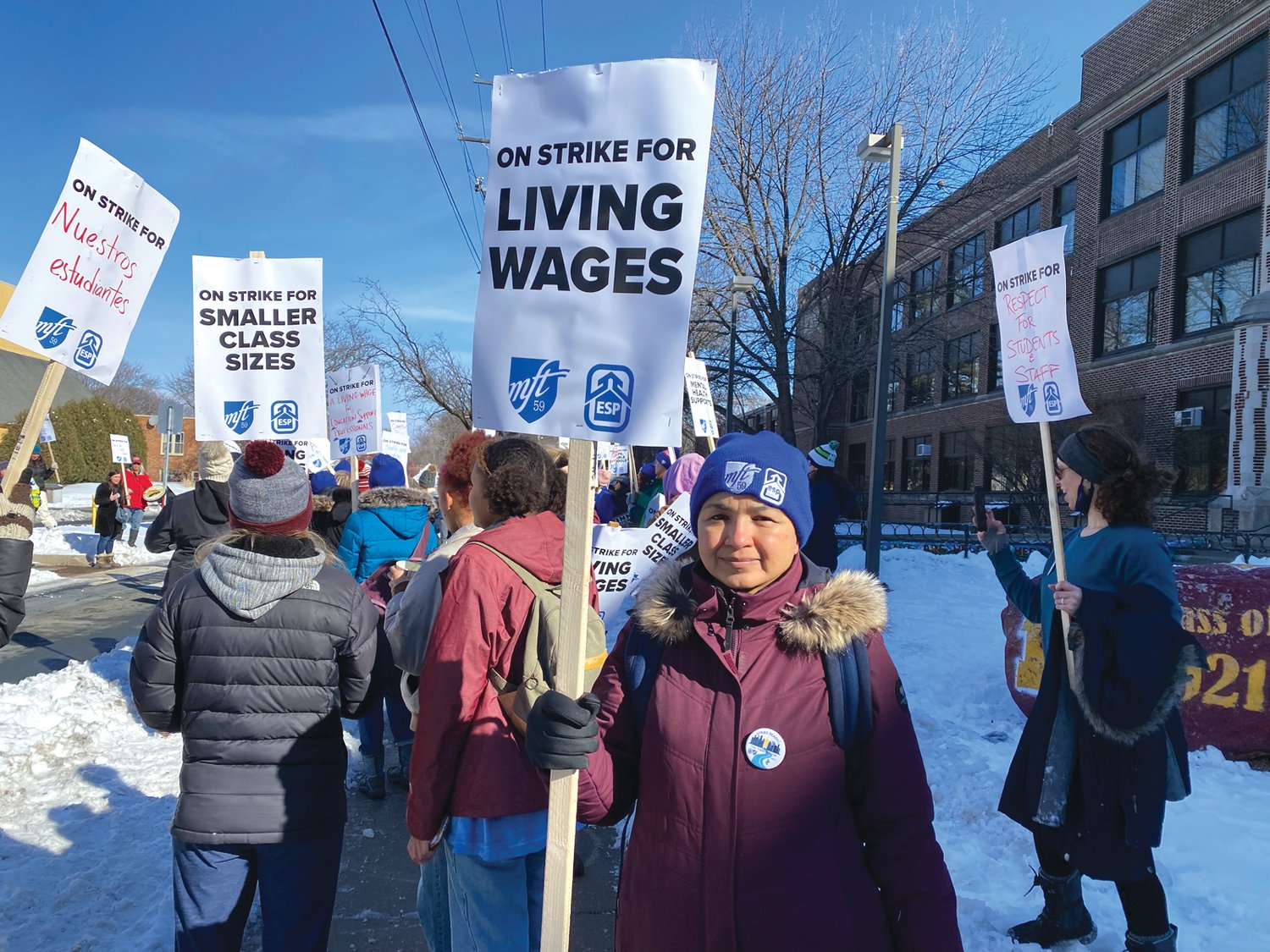 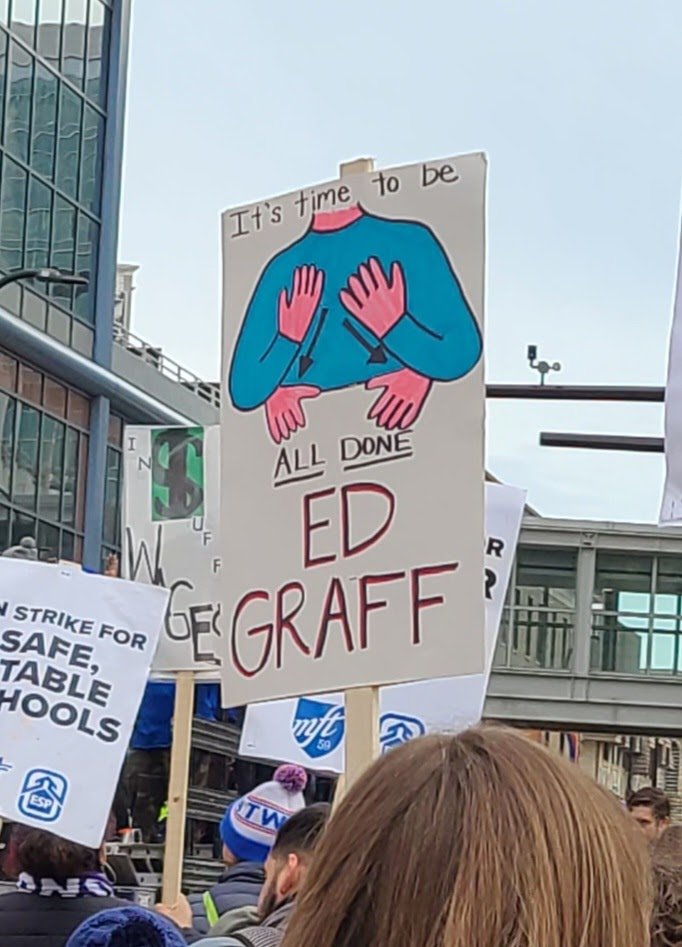 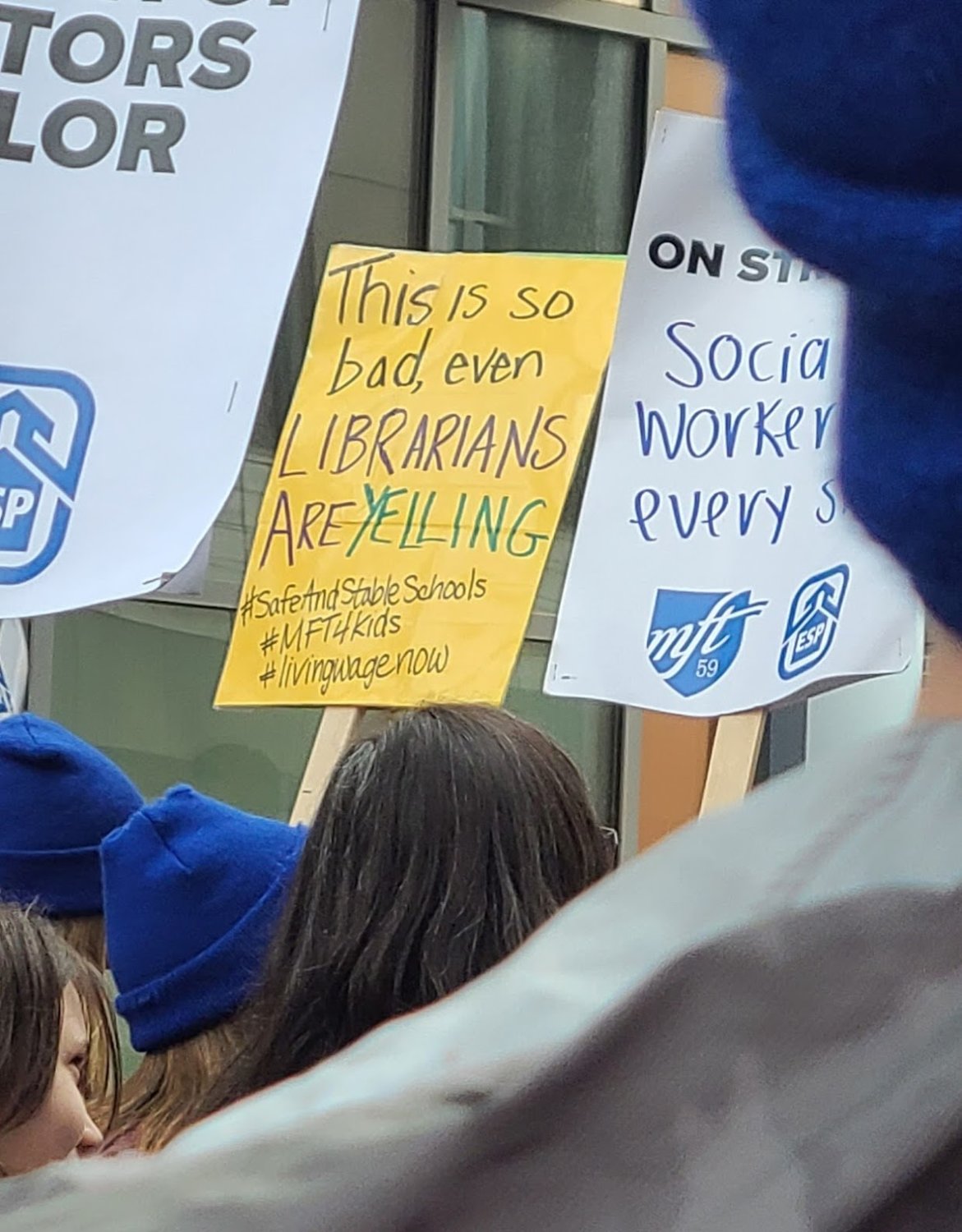 The Messenger has been posting updates and items of interest on our Facebook page. There are several photo galleries on our website, and videos on our Youtube Channel, https://www.youtube.com/channel/UC95ex6v5qVlCyO9PiHOvWpw

“Our community deserves safe, fully-funded, stable schools,” said Roosevelt High School bilingual science teacher Ana Vasquez, an Indigenous woman.
She found it meaningful to rally with fellow Minneapolis Federation of Teachers and Educational Support Professionals (ESP) Local 59 union members on day one of their strike – which also happened to be International Women’s Day.
Vasquez pointed out that many of the district’s ESPs are women struggling to make ends meet. They work multiple jobs. She observed that Superintendent Ed Graff earns $230,000 a year while educational support staff bring home $600 or less every two weeks.
“No one can live with these poverty wages,” she said. “It is not fair that our ESPs are paying the same health care premiums as those who are making six figure salaries.”
“This is who we are standing out for,” agreed Shannon Nordby, a Native American science teacher at Roosevelt.
“Our ESPs and our teachers have been working through historically trying times over the last few years and deserve to get paid fair wages; wages that keep up with inflation and cost of living. Our ESPs, especially, should be paid competitive wages and receive affordable health care for themselves and their families,” said Wendy Ledesma on Tuesday morning, March 8, 2022. Her family lives near Roosevelt Library. She was with children Santiago (age 11) and Noemi (age 9), and Pearl Jones (age 7), students at Green Central.
“As a parent of MPS students, I would love to see our ESPs’ starting salary start at $35,000 while also paying less for their health benefits - it’s not fair that they pay the same for insurance as others in the district making three times as much.
“Our students deserve more mental health supports in the form of social workers and counselors to work through everything that’s happened in the last few years, as well.
“The time is now to make things right.”

‘The money is already there’
Minneapolis Public Schools has taken the position that the Minnesota Federation of Teachers and Educational Support Specialists Local 59 is asking for more than the district can afford.
The 4,500 staff on strike since March 8, 2022 don’t see things the same way, and say it is a question of priorities.
“The money is there already,” said Sharon Alton, a speech language pathologist at Justice Page Middle School and Washburn High School who lives in Standish. “Historically, the district claims there is no money in contract years and – time and time again – a few months later they have a sudden pot of money. This has happened many contract cycles.”
This year, the state of Minnesota is projecting a $9.25 million budget surplus. “We also need the support of the legislature,” Alton added.
“We have not been able to give our best to our students because we do not have the support we need,” said Vasquez. “What about the bigger disruption for decades because we are not fully funded? There is money. There is not a good allocation of that money.”
Right now, Minneapolis teachers can leave the district and make $10,000-$20,000 more in a neighboring district. The average pay in Minneapolis is $71,000 compared to $85,000 in St. Paul.
“I could be making $20,000 more in Minnetonka,” said Alton.
When Alton started in Minneapolis 24 years ago, MPS was number one for salary. “It’s dropped considerably,” noted Alton, whose children graduated from South High.
“We’ve got a problem with declining enrollment. We’ve got a greater problem with declining enrollment than Saint Paul, but I think that’s in large part related to the Comprehensive District Design (CDD). We need to put money in so we can attract students and improve things in the long run,” stated Alton. The district's enrollment dropped from 33,500 in fall 2019 to 28,700 in October 2021.

Looking out for each other
“One of the reasons I value union membership is that we’ve got protection,” said Alton. “We’ve got people who are looking out for everyone.”
The last Minneapolis teacher strike was in 1970 and lasted for 14 days. All classes in Minneapolis were canceled beginning Tuesday, March 8, and remained through the Messenger press time. Ninety-seven percent of the teachers and 98% of the Education Support Professionals with MFT Local 59 voted in favor of the strike.

District losing educators of color
As a teacher, Alton is making a living wage although it isn’t competitive with other districts, she pointed out, but education support professionals (ESPs) are making only $24,000 a year. Eighty percent of the district’s ESPs are people of color.
“That salary makes is hard to fill positions,” said Alton. “There are hundreds of open positions in March. There are positions that have been open all year. That’s hard on kids. That’s hard on the people who are here. People are pushing to do the best by kids but there aren’t enough people to do right by our kids.”
Due to the vacancies staff may end up doing the job of three people. For teachers, not having enough ESPs means that they spend less time teaching and more time on discipline issues. They don’t have enough help to complete required paperwork, make phone calls to parents, and give students individualized attention, pointed out Alton. ESPs work with students in small groups or individually. ESPs also help with bilingual students.
The issues are compounded by staff shortages in every area of the school.
In the last 18 months, over 640 teachers and support professionals have left the Minneapolis Public School district, according to MFT59. In that same time frame, 120 teachers of color have left Minneapolis Public Schools for surrounding districts that pay more, taken early retirement, changed professions, or have been fired. In fact, Black teachers are 7.9 times more likely to be fired by MPS than White teachers.
The district has yet to accept the memorandum of understanding BIPOC educators proposed in 2019 to help retain educators of color. The effort was “proposed by educators of color, led by educators of color, for educators of color,” stressed Vasquez, who added that it shows a lack of respect by the district to not approve it.
Among other things, the MOU establishes procedures for making retention of educators of color a priority (in alignment with the demographics of individual schools), and allowing excessed educators to return if a vacancy arises. When any educator of color leaves for any reason, the type of separation will be detailed on the next quarterly report and a process for repairing harm and restoring relationship would be offered to the departing educator.
Trey Carter is a Black man and has been an ESP for seven years but was excessed from Barton Community School this year. He spoked at a press conference led by Black educators at the Davis Center on Wednesday, March 16 to highlight issues educators of color face. He is early to school and leaves late, but still can’t pay his bills on what he earns as an ESP, he said.
“I’m standing for the teachers of color,” stated Carter. “I’m standing for a living wage. I’m standing in solidarity with you all.”
“This is how we make one Minnesota,” said Leslie E. Redmond, former NAACP president and founder of Don’t Complain Activate.

Student anxiety impacts education
The union is also asking for smaller class sizes, and more mental health supports.
Mental health issues have gone up, especially in the last two years as the world has dealt with the COVID-19 pandemic and the murder of George Floyd by a police officer.
“There have always been students who had mental health needs, but the numbers have increased dramatically,” said Alton. “Anxiety is more of a health need but it absolutely impacts education. We can’t ignore it because students can’t ignore it.”
Even those schools with a mental health professional need more staff, according to Alton. “Their schedule is full in September. There are not enough spots for students who have needs.”
She added, “Our social workers are filling in at the front office for lunch breaks. Our social workers are being pulled in a thousand directions, and that makes it so much harder to be responsive to student needs.”

‘Our community is with us’
As a bilingual teacher, Vasquez also wants to see compensation for the time she and other spend creating materials for their classes in other languages. She pointed out that she doesn’t have materials provided to her in Spanish, and must spend multiple prep hours preparing for her classes and translating the materials herself. She is not paid for that translation work.”There’s a lot of extra work,” she said.
“Our community is with us. We are not alone,” said Vasquez.
“The quality of schools make a huge difference in the quality of a city,” said Alton. “We want better. We can do better for Minneapolis and our kids.”