Taller, larger buildings going in where single family homes were, with pricetags over $1.3 million 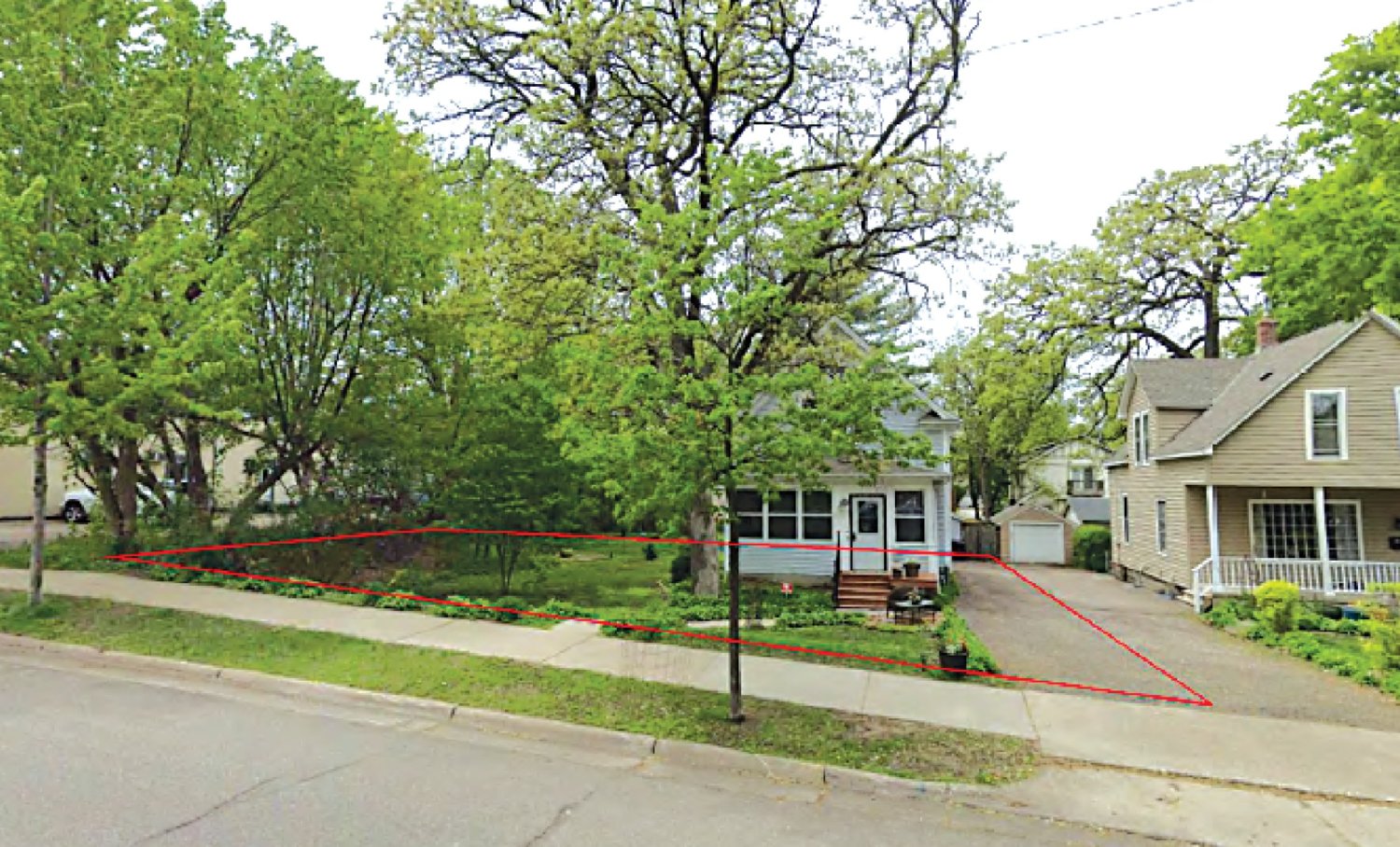 A local developer plans to raze this single family house and construct a four-story, four unit luxury condo at 4352 Zenith. The plan includes a 47-foot dividing wall behind the house, which neighbors say will cut off light from their properties, harming their gardens and green space. Multi-unit buildings are allowed under the city’s 2040 plan. 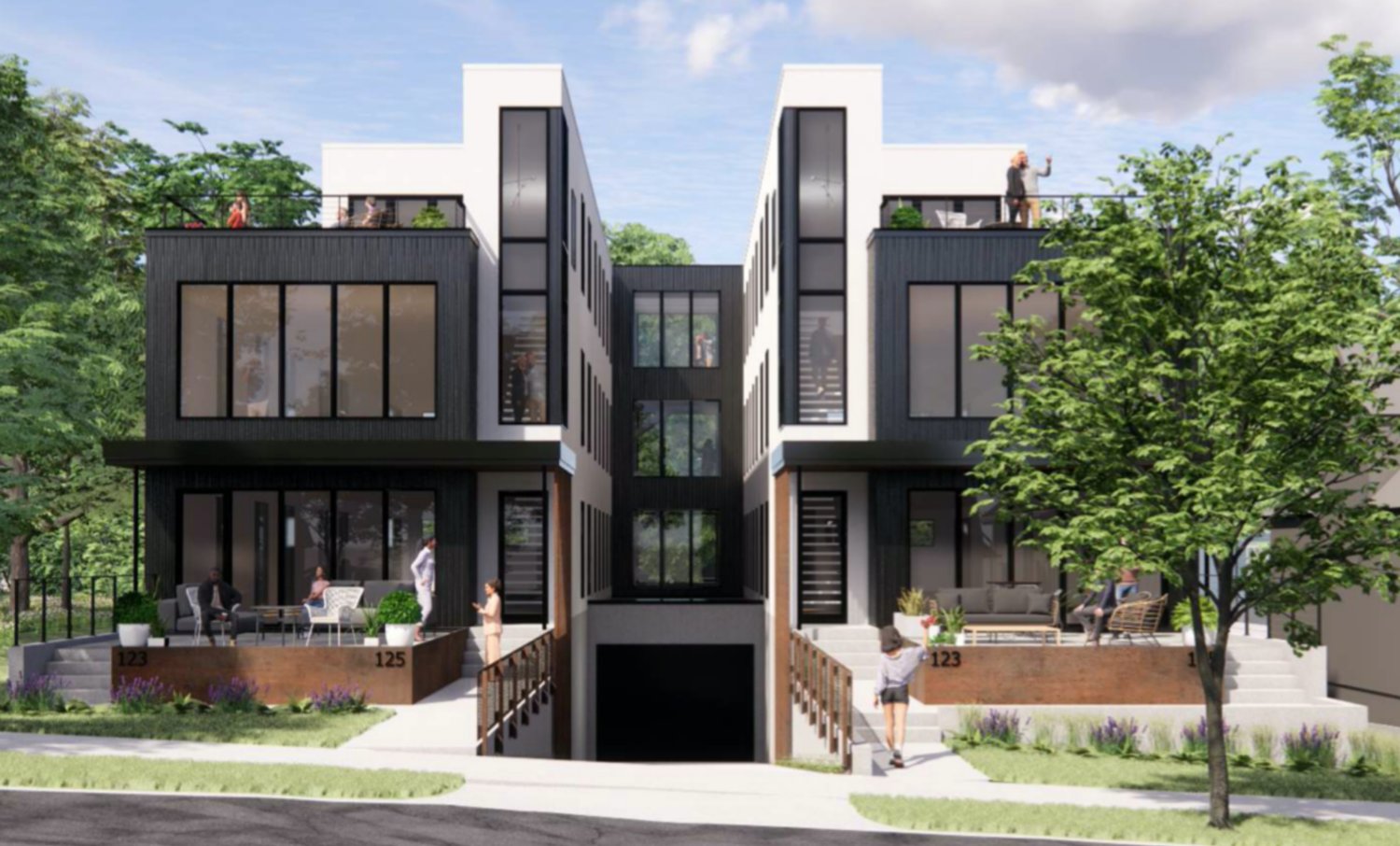 The proposed building for 4352 Zenith Ave. S. by Sustainable 9 drew many neighbors to the Minneapolis Planning Commission meeting on Sept. 19 with concerns about affordability, privacy, and green space. The proposed four-story building will replace a single-family home, and is allowed under the 2040 plan. 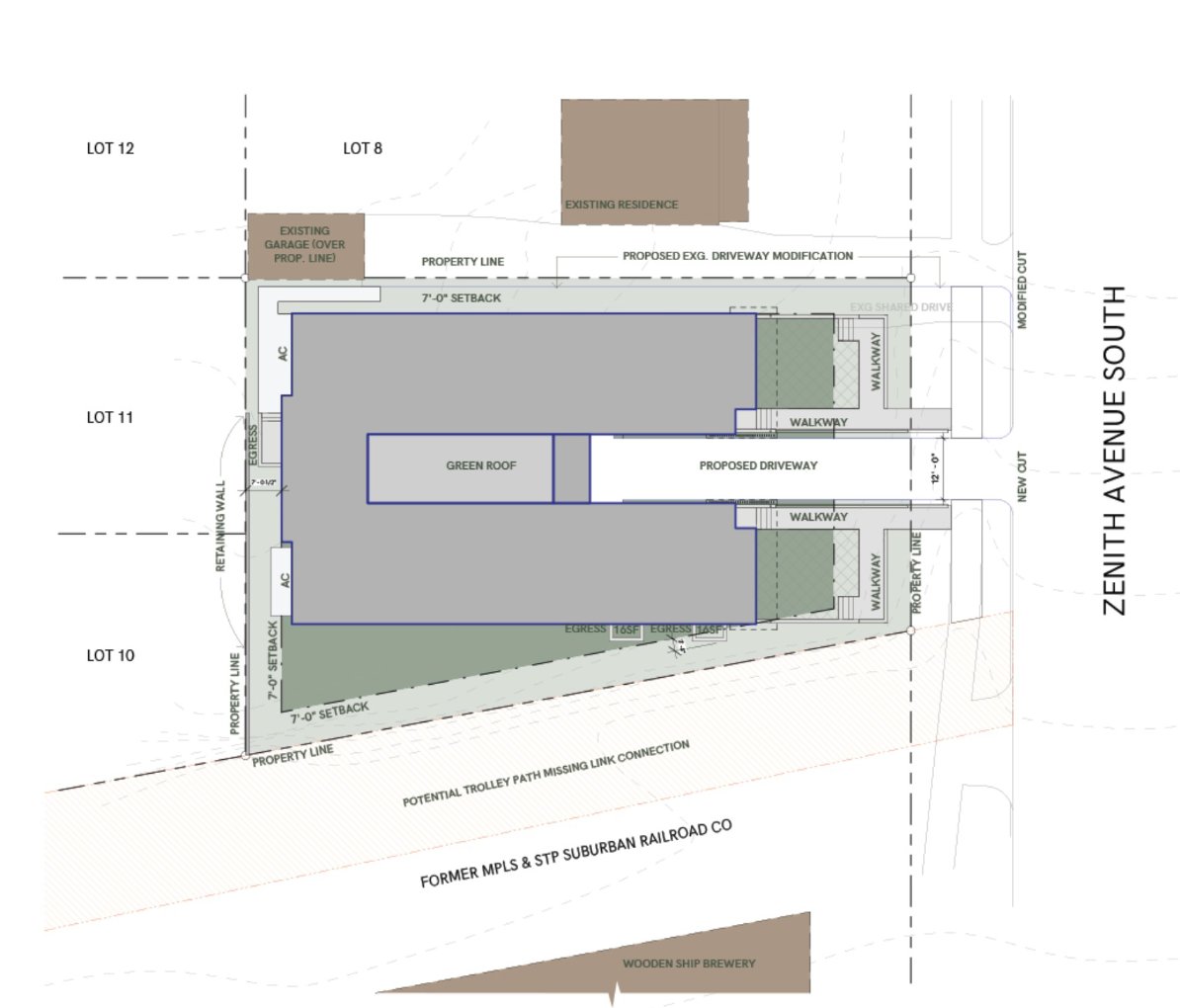 A goal of the 2040 plan is to encourage equitable and affordable housing, but it also creates gaps for condominiums worth over $1.3 million.

A Linden Hills proposal by Sustainable 9 for four luxury condominiums at 4352 Zenith Ave. S. was debated during the Minneapolis Planning Commission meeting on Sept. 19, 2022. The Sustainable 9 office is located a few blocks away from the proposed site at 3511 W. 44th St.

“I have supported the 2040 plan because I’m an advocate for justice and equality in housing, and this is not what I see happening with the new housing in the neighborhood,” said Mary Brown, who lives next door. “I’m a pediatrician and my spouse is a marriage and family therapist, and we are being priced out of our own neighborhood by developments like Sustainable 9’s.”

There is currently a single family home on the .24-acre lot that is valued at $445,000. It was purchased by Brett and Janelle Hanson (partners of Sustainable 9) in November 2021, and then transfered to S9 Asset Holdings, a division of Sustainable 9.

The lot is just north of the former trolley car right-of-way and Wooden Ship Brewing. The Trolley Lines Condo project includes demolishing the existing single-family dwelling on the site and constructing a new three-story, four-unit residential building with three-bedroom units. All units will share a centralized elevator and staircase, and a fitness area on the second floor. The ac units will be  a couple feet from the rear property line. The units on the first floor will have access to outdoor decks in front and rooftop decks in back. The 14,222-square-foot building will have one level of underground parking accessed from a single driveway off of Zenith Avenue South,with a green roof on top.

The site is currently zoned R2B Multiple-family District. To construct a four-unit building the site must be rezoned. The new building would be 26 feet from the street, and about 7 feet on the other sides. A deck would be three feet from the property line on the south side.

Another Sustainable 9 building in Linden Hills, also with four units, is currently priced at $1.385 million each.

Planning commissioners debated whether affordable is always associated with equitable. Several stated that this type of development is what they would like to see more of coming out of the 2040 plan. Commissioner Aneesha Marwah pointed out that the Sustainable 9 building plans are helpful for those who need wheelchair access. Commissioner Becky Alper (who represents the Minneapolis Parks and Recreation Board) said these condominiums could be helpful to the elderly. She mentioned that it made her think of her own aging parents, who would appreciate being in an accessible home while also remaining in an urban neighborhood.

This is far from the first debate about the 2040 plan implemented in Minneapolis in 2020. Hennepin County Judge Joseph Klein stopped the implementation of the plan in June of 2022 when concerns were raised about the environmental impact that the plan would have. In a lawsuit filed against the plan, Minnesota Citizens for the Protection of Migratory Birds, the Audubon Chapter of Minneapolis, and Smart Growth Minneapolis claimed that the 2040 plan violated the Minnesota Environmental Rights Act. However, in July of 2022, the plan was temporarily implemented once again.

Environmental concerns were also brought up at the Planning Commission meeting on Sept. 19. Several large trees will need to be removed at 4352 Zenith, and a request to see the water runoff and drainage plan for the building was made.

The plan for the condos at 4352 Zenith includes a 47-foot dividing wall. Neighbors say it will cut off light from their properties, harming their gardens and green space.

Stephanie Untiedt, the neighbor directly behind the Sustainable 9 project, said, “The proposed design would have a wall the entirety of my property line…I have eradication of all my natural light, and obviously a lack of privacy issue with (people in) the elevators peering into my home windows and yard.”

The pictures of the proposed building do not include the backyard neighbors nor does the 360-degree rendering video that was presented at the Planning Commission meeting. Rather, they show a large meadow, which Untiedt claims is misleading to potential buyers and community members alike.

“(The building) is surrounded by very nearby backyard neighbors, hence, us all feeling ‘erased’ both literally and metaphorically in this development process,” Untiedt said. “Councilmen Rainville stated in the Planning Commission meeting that there were not supposed to have been any ‘winners or losers in 2040,’ but this clearly shows all the backyard neighbors as ‘losers’ because this developer is not showing any regard for them.”

“In general, the ‘transition’ zoning between higher intensity and lower intensity still comes as a surprise to many residents in these transition spaces,” pointed out Ward 13 City Council Member Linea Palmisano, whose ward includes Linden Hills. “The most aggrieved residents to this new zoning thus far are finding out they live in these transition zones.  It is going to be slow to change, and our city won’t grow evenly.  Clearly a developer saw an opportunity here and acted.

“People think that it’s out of place with existing zoning, but it isn’t and has been this way since 2019. Having a suddenly much larger building in this transition space as of right, when the places all surrounding it remain with much larger setbacks and greenspace, is a big change in the fabric of our neighborhoods. Neighbors are taken aback at the massing and gentrification happening even within these relatively small-scale corridors and side streets. The things that will make these new projects fit well are a lot of communication between developers and these nearest residents. These new projects are dramatically changing the feel of what has existed for sometimes generations. These projects are not meeting the ideals of affordability, elimination of disparities, feeling more connected, natural cultural amenities and climate forward jobs programs.

“Those are often not things that the city can condition onto a land use application.  But these types of considerations and working together really are critical to our city’s future.”

The Planning Commission intended to continue this conversation at its Oct. 3 meeting. Commissioners encouraged Sustainable 9 to reach out to homeowners in the neighborhood in order to talk about compromises in the development. At this time, Untiedt has said the developers have not reached out.