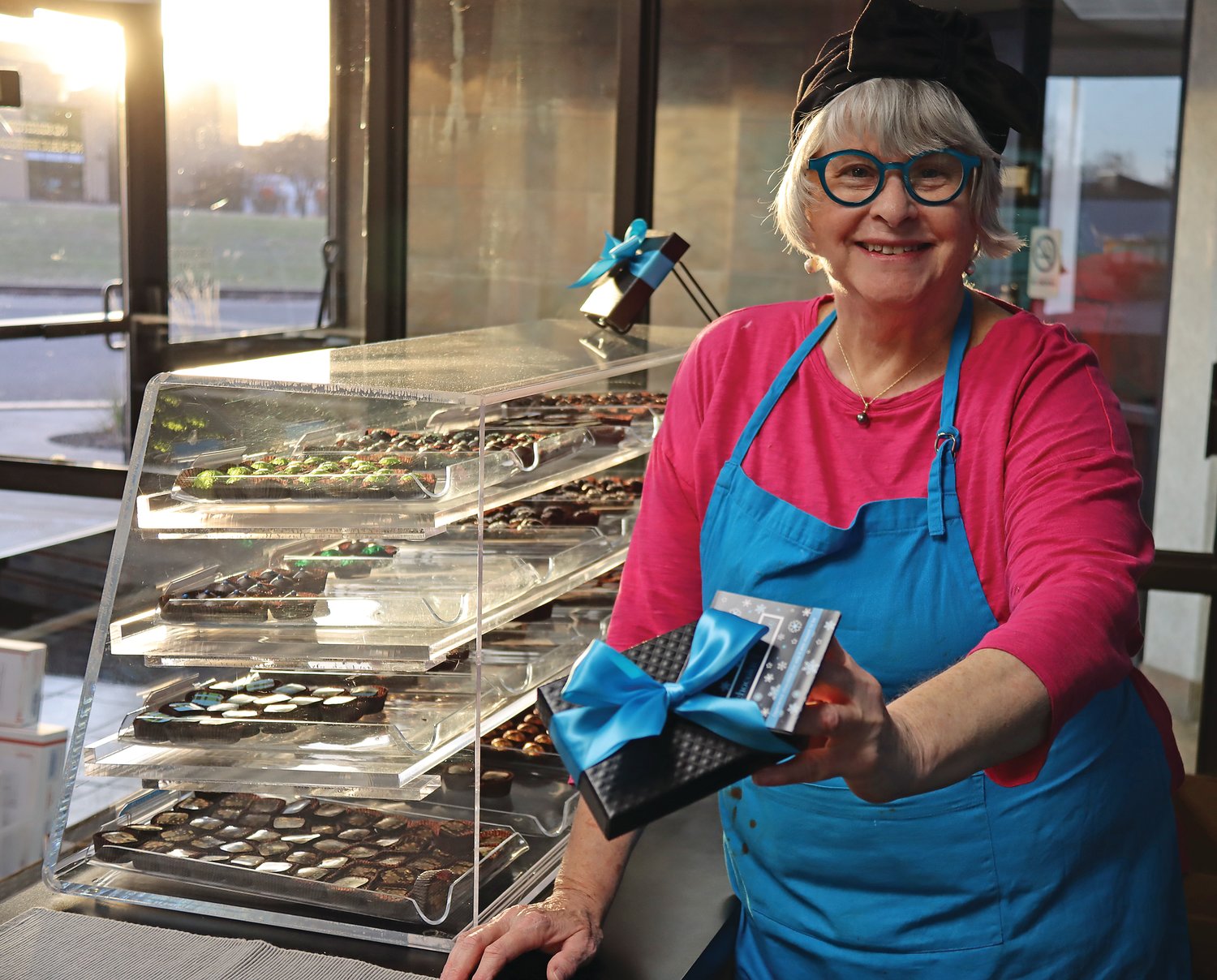 Twin Cities chocolatier Mary Leonard of Chocolat Céleste puts together a box of freshly-made truffles. Leonard battled breast cancer in 2020, but didn’t miss a day of work. She had chocolates to create, after all. Each chocolate is hand made with fresh whipping cream, small batch butter and the finest fair trade cocoas. The company that she started at age 46 was named after her beloved Bichon Frise. (Photo by Tesha M. Christensen) 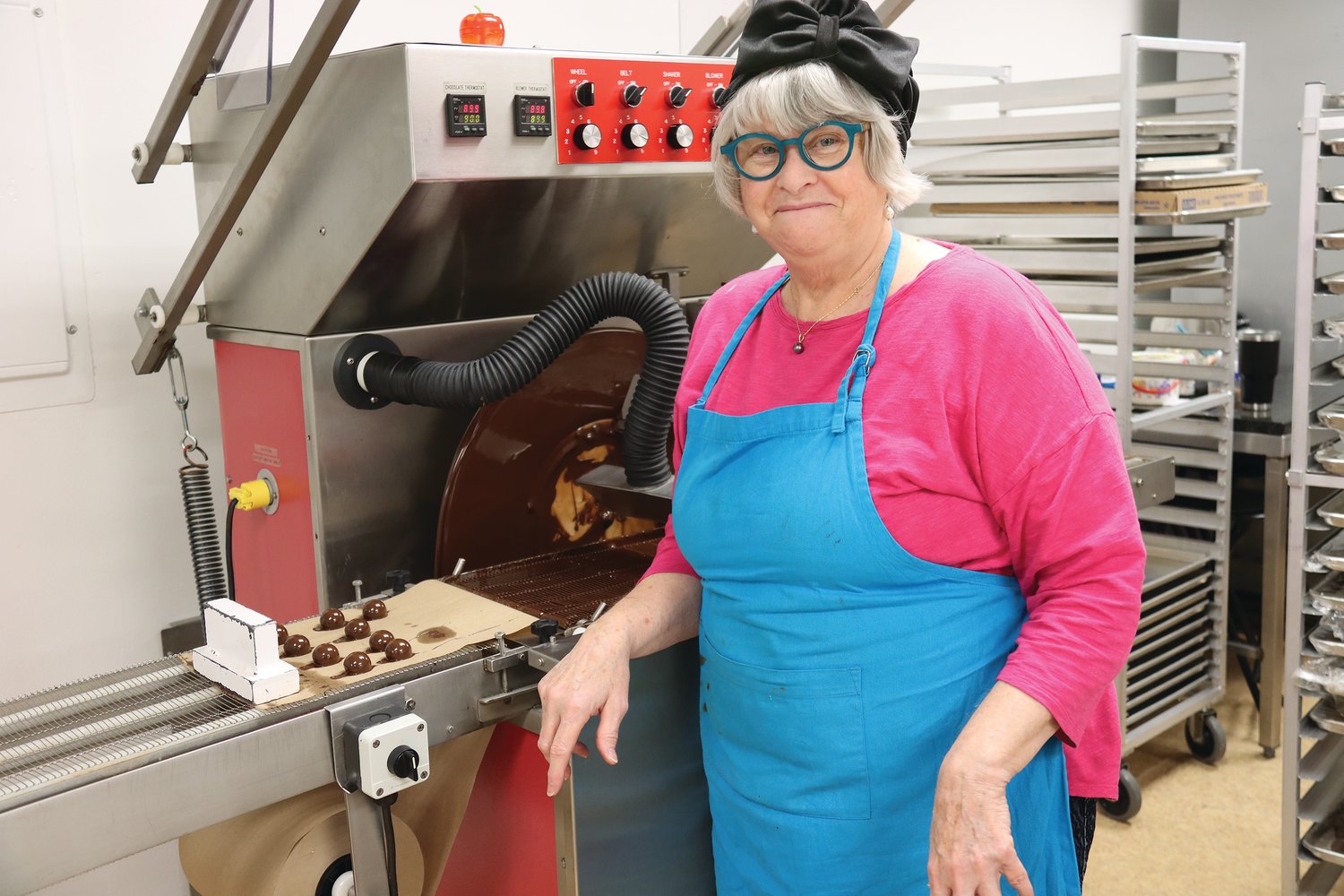 Chocolat Céleste owner Mary Leonard adds a layer of chocolate to truffles at her facility in the Midway area of St. Paul. “There aren’t any chocolates like mine at Lunds and Byerlys or a department store because they’re fresh,” she said. (Photo by Tesha M. Christensen)
Previous Next
Posted Thursday, January 19, 2023 2:44 pm
By Tesha M. Christensen

The Twin Cities’ beloved chocolatier Mary Leonard of Chocolat Céleste didn’t take a day off work when she was being treated for breast cancer. Not even when she was dealing with severe radiation burns.
It was her busy holiday season, after all.
On Christmas Day 2019, her sister called her twice. The second time, Kate told her why she had called. She had just been diagnosed with breast cancer.
Breast cancer had always been on Leonard’s radar. Her grandfather died from breast cancer in the 1930s, and an aunt also battled it. Leonard started having regular mammograms in her 30s.
After hearing the news from her sister, who is two years older, Leonard called to make an appointment. They tried to put her off, she recalled, and she asked when their next opening was. It was the next morning. That first appointment on Thursday showed lumps in both breasts. When they suggested a second appointment two weeks later, Leonard again asked when their next opening was. She went the next morning, and then again on Monday. The diagnosis was stage one breast cancer, ductal carcinoma. Her sister had both ductal and lobular, and opted for a double mastectomy and reconstruction.
Leonard’s path involved a lumpectomy – which she scheduled for right after the Valentine’s Day rush. Because of the physicality of her job, she didn’t get a mastectomy.
She learned she carried the BRCA2 gene, which is fueled by estrogen. Chemotherapy started the second week of March 2020 at Methodist Hospital’s Frauenshuh Cancer Center. She went every Thursday for the infusion and had a full head of hair through Aug. 1. Then she switched to a medication known as “The Red Devil.” She had lost all her hair by Sept. 1.
“I was very lucky because I was not sick at all after chemo,” stated Leonard.
“Radiation was different. I still came to work everyday, but I had pretty severe buns. I’m pretty fair skinned. That was pretty intense.”
It was Christmas by that time. “You can’t miss Christmas,” she said.
Throughout the uncertain months, Leonard found joy in making fine chocolates and sharing them with others. “Fine chocolate actually affects the brain chemistry, changing your dopamine and sero tonin levels,” said Leonard, which affects your sense of well-being. “Chocolate can have a calming effect.”
She fashioned a box of chocolates for the Firefly Sisterhood, an organization that gave her support during her journey through cancer. Each piece of chocolate featured the group’s signature firefly. Twenty percent of every Firefly Sisterhood Collection purchase supported the organization’s mission: to ensure that women in the community do not face breast cancer alone. She also created a box to benefit the Hope Chest for Breast Cancer Foundation.
The Breast Cancer Collection continues to be sold at Chocolat Céleste, made with Valrhona chocolate, cream, and butter.

A CACAO LOVE STORY
Leonard has always worked hard –past employers said she did the work of five employees.
Now 68, Leonard grew up around female entrepreneurs. Her mother owned a salon. “We counted money on Saturday night,” recalled Leonard.
She began to dream about running her own business. Even as a teen, she loved to bake and make chocolates. “I was visually inspired to create visually appealing foods,” said Leonard.
She earned a bachelor’s degree in liberal arts in 1976 and a bachelor’s degree in business and food science in 1978 from the University of Minnesota. She began working in the kitchen and dietary department of a 150-hospital system. She wrote 3,000 recipes and learned how to manage a kitchen. Then she shifted in 1989 to manage a project with the state of Minnesota and the Kennedy School of Government at Harvard University to introduce artificial intelligence and expert systems to state agencies. They partnered with IBM. Next she was tasked with managing the merger of the state of Minnesota’s voice and data networks. Along the way, she earned her software development and design certificate from the University of St. Thomas, as well as a mini masters in marketing and telecommunications for the non-engineer. Plus, she took cabinetmaking classes at Minnesota Technical College.
When she encountered sexism in the workplace, she went to work for one of their vendors. At MCI Telecommunications, she served as the marketing and sales manager of a four-state region serving state governments and universities and managing a multi-million dollar piece of business.
MCI was her last employer.
When it was purchased, she took a package and didn’t work for three years. She was in her mid-40s and checked off items on her bucket list.
While on a bicycle tour of France, she forwent the wine tours and checked out the patisseries and chocolatiers instead. “At 46 years old, I made the decision it was time to take the leap,” she recalled. “I needed to do what I had intended to.”

THE FINER THINGS OF LIFE
She attended various Chocolate and Sugar Technology courses through the University of California, Davis, and took a chocolate course from Jean Marie Auboine. In 2008, she earned a Fast Track for the Lean Organization mini masters from the University of St. Thomas.
“I taught myself what I needed to know,” said Leonard.
She tested some boxes of chocolates at a local grocery store to see how they would sell. She doesn’t partner with stores now to carry Chocolat Céleste products. “They aren’t any chocolates like mine at Lunds and Byerlys or a department store because they’re fresh,” she explained.
Leonard leveraged the connections she had made over the years to network with universities and corporations looking for gifts to give their clients and donors. She also caters to individuals who want to come in and personally build their own box of chocolates.
Leonard imports the Valrhona brand of luxury chocolates made purely from cocoa beans, and uses that to fashion the signature Chocolat Céleste truffles. Valrhona, based in the small village of Tain L’Hermitage, France is a certified B Corporation. She uses Organic Valley cream, and handcrafted butter from the family-run Hope Creamery in Hope, Minn. Her selections change slightly according to the season. There are no preservatives and no gluten.
“Sharing the finer things has always been a joyful and deeply memorable experience for me. I see eyes light up as friends and colleagues sample and discover my chocolate notes and nuances. For me the world of fine food is about discovery,” said Leonard.

A SENSORY CELEBRATION
Leonard has seven seasonal staff – and many of them also work at various State Fair booths in August, such as Jan Halter who works at Sweet Martha’s Cookies. Stephanie Drake also works at the fair – and has known Leonard since their high school chemistry class. She appreciates flexible hours and likes being busy. When asked what her favorite chocolate is, Drake responded, “Vanilla peries. Or, creme caramel.”
For Leonard, it is the Franglico, which was called the Celestial Sweetie for 10 years (until Celestial Seasonings threatened a trademark infringement).
Tangletown resident Jessica Kelley said, “If you’re looking for the perfect sweet treat gift, I highly recommend Chocolat Celeste, a local women-owned Chocolatier. These scrumptious chocolates are handmade using sustainable and fair-trade ingredients. A delicious and responsible way to support your local economy.”
Costs have gone up on chocolate, cream and butter. Someone else might consider finding cheaper alternatives and downgrading the ingredients. But Leonard doesn’t plan to take that route.
She knows what makes her chocolates taste so good.