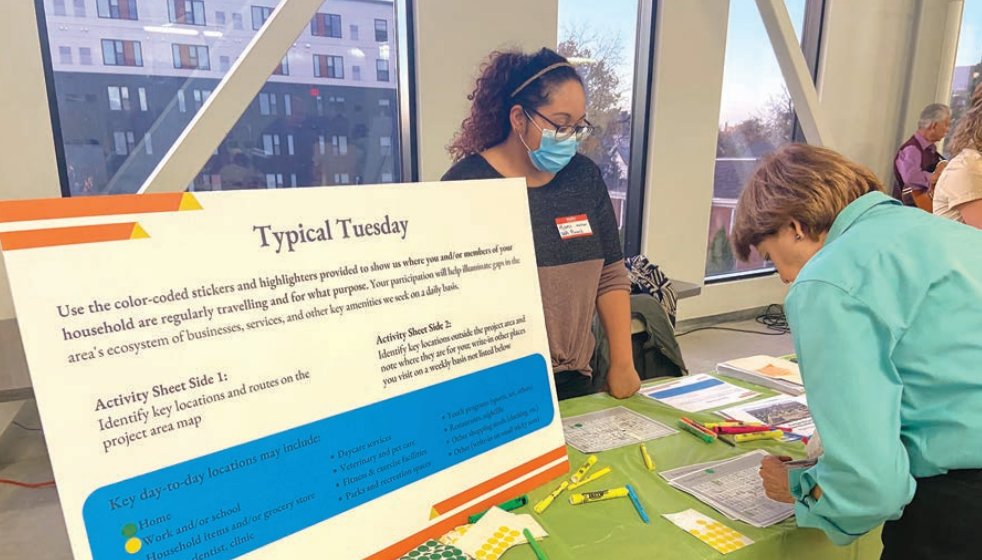 Peg Thomas fills out where she travels throughout Minneapolis on a typical Tuesday. Residents filled out these forms at the open house to discuss the former Kmart site on Oct. 25 in order to help city planners see what would be helpful to add in the area.
Chloe Peter 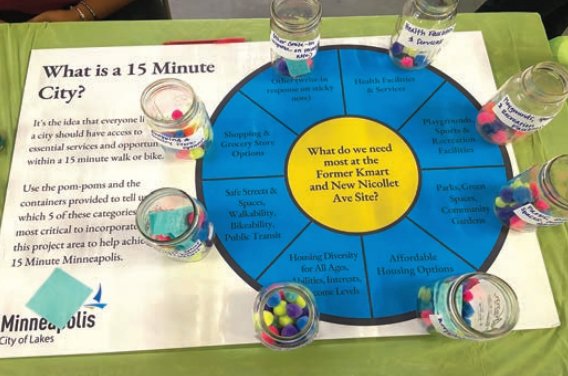 Residents were asked what type of establishment they would like to see in place of the former Kmart site at Nicollet Ave. and Lake St. Ideas included affordable housing, healthcare resources, and groceries.
Chloe Peter 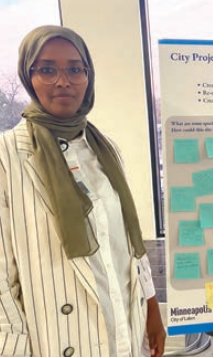 The Nicollet Redevelopment will take down barriers that have impacted residents and local businesses.

Lake Street and Nicollet Ave. was once an intersection of two commercial corridors. But after the Kmart site was built in 1977, Nicollet Ave. has been cut off into different side streets.

The City of Minneapolis held an open house on Oct. 25 at Abyssinia Cultural Center (322 W. Lake St.) to get public comments. Attendees were asked:

• What are some specific housing, small business, and public space needs in this area?

• What else should we know about community health and safety in the former Kmart area?

The city plans to host more design workshops in the future.

Minneapolis owns approximately 10 acres of land between the Midtown Greenway, Lake St., 1st Ave., and Blaisdell Ave. This property is referred to as the “former Kmart site.” The redevelopment project will connect Nicollet Avenue south of Lake Street and north of the Midtown Greenway, reestablishing a street grid after decades in which Nicollet Avenue was cut off by the store. The city of Minneapolis bought the store in March 2020 and was planning to demolish it that year. However, after two local post offices were

burned following the murder of George Floyd, the building was used as a temporary post office. The Lake Street Post Office station at E. 31st St. and 1st Ave. S. has recently reopened. The post office at 3033 27th Ave. S. is under construction and will be completed before the lease for Kmart ends in September 2023.

The city, according to its project expectations, “is ready to reconnect this commercial and cultural crossroads.”

The city will reconstructing the street between 29th and Lake Street, aiming to “approach street design in a way that prioritizes people as they walk, take transit, and bicycle over those driving.” The street and streetscape design is yet to be developed.

At the open house, city of Minneapolis employees stood by posters that encouraged attendees to write out their comments and concerns on post-it notes so others could jump off ideas in discussion. Rebecca Parrell, a project supervisor with the Minneapolis Community Planning and Economic Development department, was also there helping to answer any questions that attendees had. The booth she stood at asked community members where they travel most on any given day in order to help address gaps of business, service, and other amenities in the surrounding area.

“We’re happy that more than 100 people attended the open house and got the opportunity to share feedback with staff about the New Nicollet project,” said Parrell. “With engagement underway now, we hope more people take advantage of this once-in-a-generation opportunity to help shape the vision for this site.”

There is still much discussion about what is to happen with green spaces, housing, development, retail, displacement, building design, and parking and parking and vehicular access. Some of the topics still undecided are stormwater management, size and placement of business locations, phasing plan for development, and understanding what businesses operate in the area and what they need to continue to succeed.

“How can we have public spaces like parks when we force the homeless to be out all day instead of helping them find resources?” Thomas said.

She also mentioned her frustrations with the Kmart going up in the first place. Thomas believes that such a prominent road should not have ever been blocked. She pointed out that it cut off a part of the community that could have been more connected had the site not been turned into a Kmart.

“I think it was corruption that cut up the road and the city like they did,” Thomas said.

If residents would like to give further feedback on the Nicollet Redevelopment, the city has opened a survey through Nov. 30. The survey asks residents about how they currently get to the area, for what reasons, and what their future goals are for the area. The Supervalu at the site has been demolished.