A voice for justice 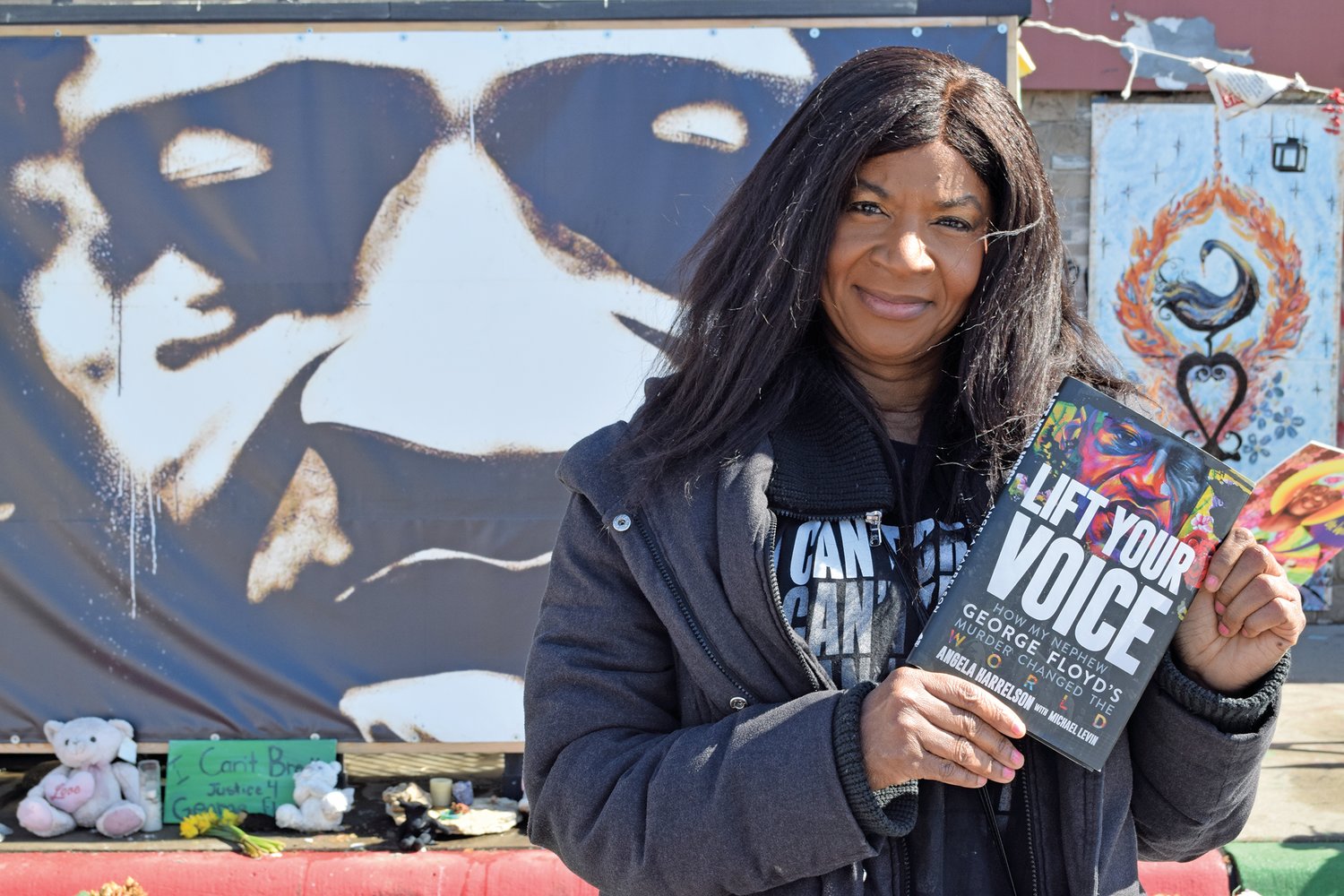 Angela Harrelson calls the shift that has taken place since the death of her nephew, George ‘Perry’ Floyd, “the Great Awakening.” (Photo by Jill Boogren) 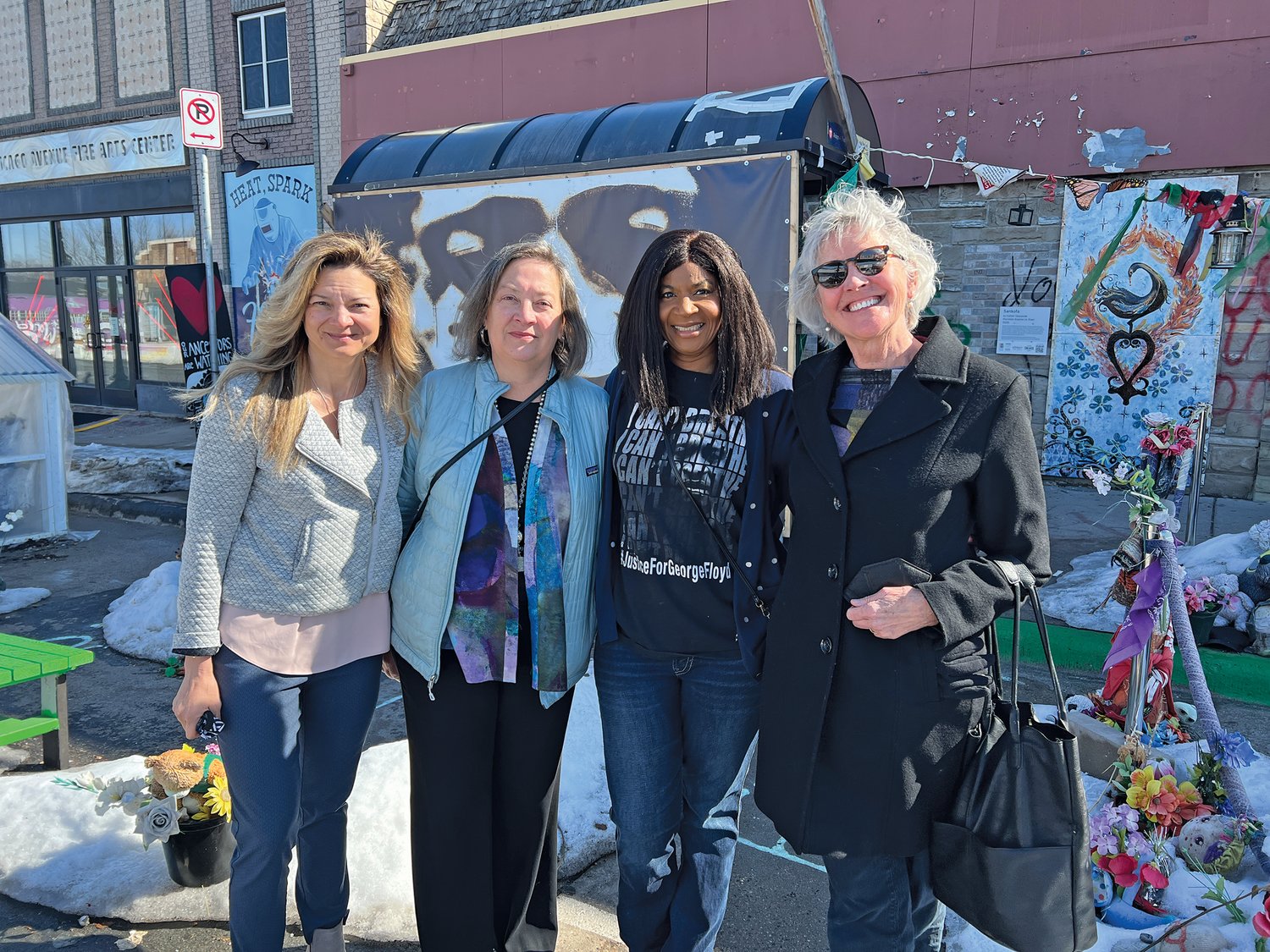 I Ling Thompson from Colorado, Diane Regas from California, Angela Harrelson and Susan Schmidt from the Twin Cities talk at the George Floyd Memorial. Harrelson often greets visitors to the Square and has met people from all over the world. (Photo by Jill Boogren) 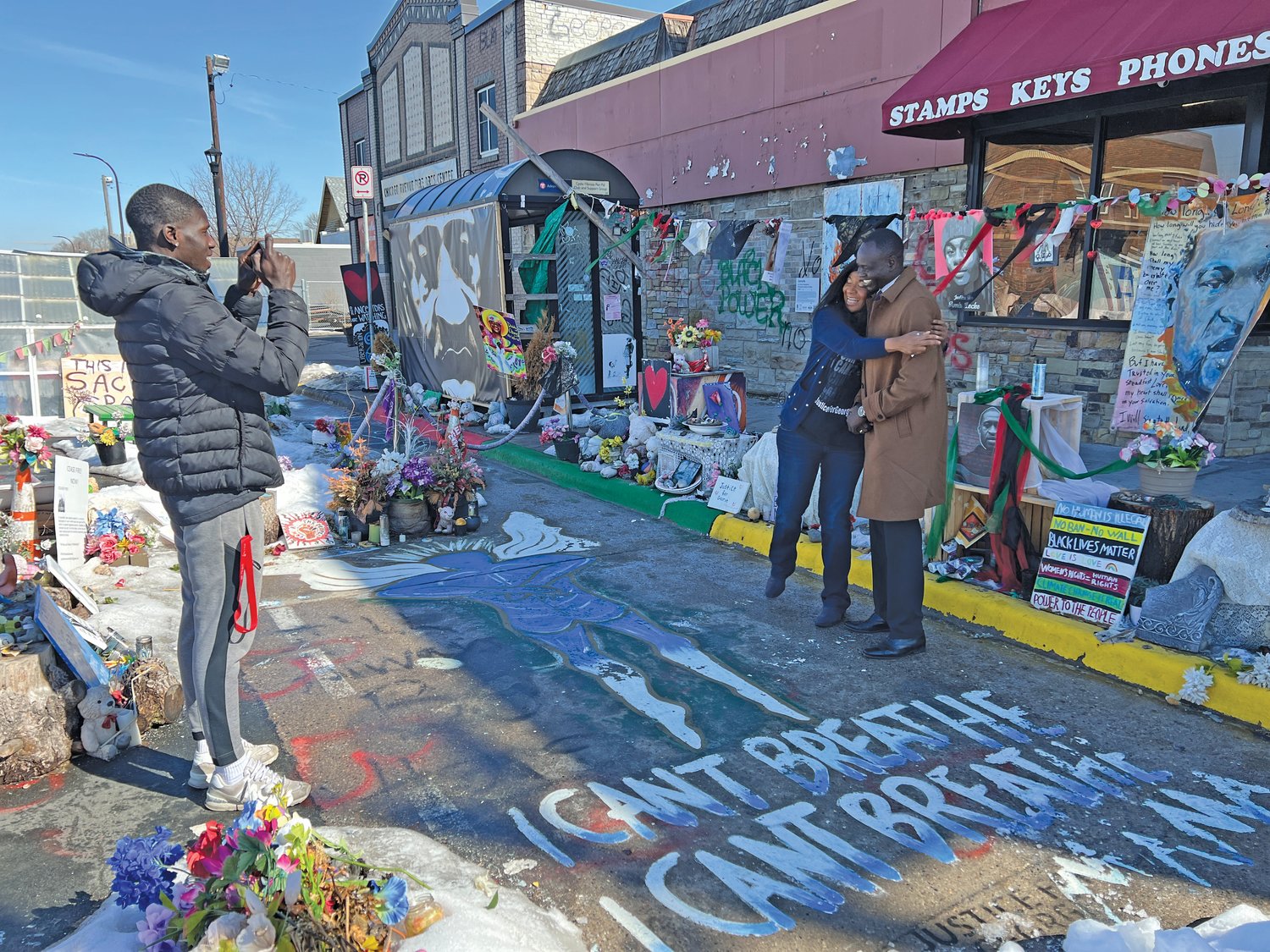 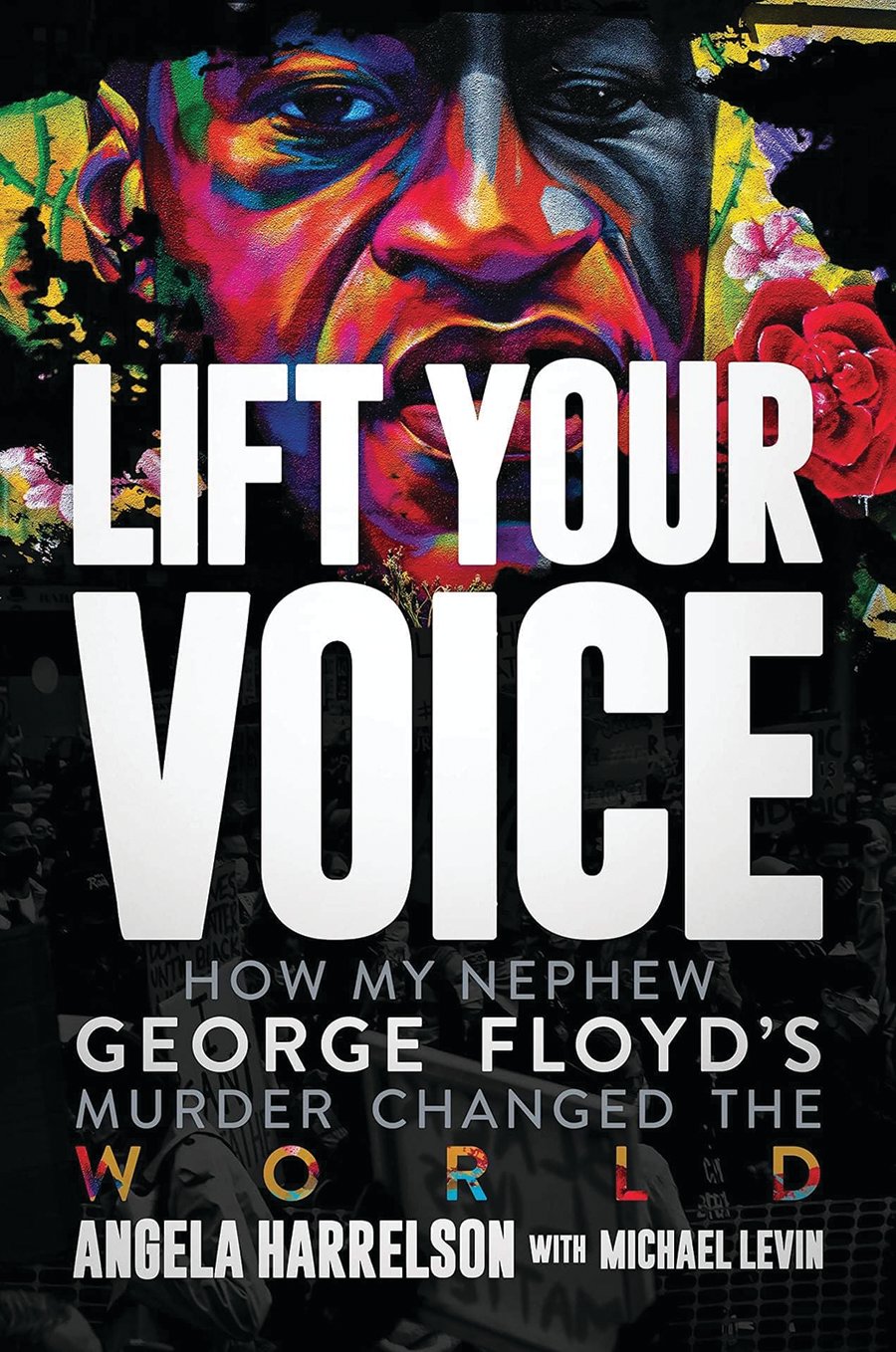 Becoming an activist in a worldwide movement for racial justice was beyond anything Angela Harrelson would have imagined for her life. But the murder of her nephew, George Perry Floyd, Jr. – or Perry, as his family knew him – by Minneapolis police officers, changed her in profound ways.
In her memoir, “Lift Your Voice: How My Nephew George Floyd’s Murder Changed the World,” Harrelson shares her reaction to Perry’s death and the conviction of Derek Chauvin. She exposes the racism she experienced as a child in the south and as an adult in the Midwest. She challenges White Americans to look closely at their own perceptions and beliefs. And she shares how her nephew’s death pushed her to use her voice against injustice.
Before she had time to truly grieve for Perry, Harrelson was launched into the spotlight – as a public spokesperson, a representative of the family, a speaker at events, co-chair of the George Floyd Global Memorial – all brand new roles for her, each in contrast to her upbringing.
“I grew up in a raggedy old shack in Goldsboro, N.Ca.,” writes Harrelson. Her family was poor, sometimes on the receiving end of racial slurs and discrimination. Her mother, born in 1925, gave birth to 14 kids and had a lot to navigate.
“My mother raised us to be very submissive to White people,” said Harrelson in an interview at the memorial. “Even though she would tell us behind closed doors, ‘You know you can do this… but at the same time, don’t question them.’ She did that out of protection. Because she grew up in an era where you didn’t question White people.”
Harrelson learned to pursue her dreams anyway, but to keep a low profile; speaking up against racism was not an option.

Finding strength
As she dealt with a wide range of emotions following Perry’s death, Harrelson turned to something familiar, writing, which became very therapeutic for her. She had always journaled – she even used to write family newsletters – and found that the process allowed her to reflect on everything she was feeling: Angry. Mad. Frustrated. Guilt. Her anxiety level was up.
“I was in a dark place,” she recalled. “But then… there was love. I felt love. And kindness. That was coming out of me, too. And that’s where I needed to be.”
The writing process took her back to her childhood, retriggering numerous instances of racism she had endured: Being forced to stand on the school bus, a target of bullying by White students, prohibited by a teacher from using her own first name in class. As an adult, when Harrelson expressed interest in becoming an attorney, an instructor at Kirkwood Community College in Iowa told her straight up, “I’m a racist, and I don’t teach Black people.”
For Harrelson, the murder of her nephew showed that though there have been changes over time, there were hidden inequalities, injustices within the system; things never really changed.
“Perry’s death made me see that very clearly,” she said.
Enduring poverty and being raised in a family culture that gave her faith, Harrelson found strength she didn’t know she had – including in the determination and willpower passed along by her ancestors, especially her great-grandparents who were born to slavery.
“They passed along that strength through their hands, their blood, sweat and tears, and their faith, all of that was passed along to survive,” she said. “Because they had to.”
Coming to terms
Though Harrelson wanted to see the site where Perry was actually killed, it was too overwhelming at first to go to 38th and Chicago.
“It was difficult because everything happened so fast. One minute Perry was here, and all of a sudden he wasn’t here. And it’s dealing with the reality that he really is gone,” she said. “I knew that he’d been killed… But then, he was everywhere. I walk out and he’s on somebody’s wall. Somebody’s wearing him on a t-shirt. And it played with my mind, my emotions. It was just so sad.”
She stayed hidden for a while, but when she came out, the community “wrapped their arms around me, and I knew I was gonna be okay.” Harrelson and her family leaned on each other plenty. But being the relative who lived closest to Perry, with the rest of her family in North Carolina and Texas, the community at George Floyd Square became like family to her. Having people nearby to call on when she needed something and neighborhood kids calling her “Auntie” filled a void in her life.
She also saw how they were taking care of the memorial, delicately, meticulously, making sure the offerings were in the right place, one small piece at a time.
“They take care of this memorial as though [Perry] was their brother or sister, and I see them doing that for my family,” said Harrelson. “They didn’t know him. But they had the commonality of the pain.”
On Oct. 14, 2020, Perry’s birthday, Harrelson, with Perry’s cousin Paris Stevens and now-executive director Jeanelle Austin, launched the nonprofit George Floyd Global Memorial to preserve the offerings and ensure the stories in the movement for justice are carried to future generations.

The Great Awakening
Harrelson calls the shift that has taken place since Perry’s death “the Great Awakening.”
“It was a validation of this ugliness that was being hidden for so many years, playing with people’s minds, because to White America… they could not see that,” she said. “When Perry died, it gave validation. It gave meaning. It gave support. That what we were saying was true.”
As these hidden layers were exposed, she felt Black people didn’t have to defend themselves as much, and White people became more open to hearing the message – that fundamentally, according to Harrelson, “we need to treat people like human beings.”
When Perry was pleading for his life, speaking out of desperation, she reasoned, he was appealing to Chauvin as a human being. But Chauvin and the other officers failed to see Perry as one.
With this exposure has come some forward progress, Harrelson believes. Since her nephew’s murder, some cases have been reopened, and six police officers in Minnesota have been convicted for extreme violence against Black people (Chauvin, J. Kueng, Thomas Lane, Tou Thao, for George Floyd’s murder; Kim Potter of Brooklyn Center in the death of Daunte Wright, and Brett Palkowitsch of St. Paul for using excessive force involving a police dog during an arrest of a person mistaken for a robbery suspect).
“Those may be small victories to others, but those are battles we have won towards the war… So yes, the movement is going forward, and it makes me feel good to see these things happening, because I know that it validates to me that my nephew’s death was not in vain,” said Harrelson. “Everything takes time. You’re not gonna win all the battles. But it doesn’t stop us, ‘cause when we go five steps backwards, we gonna go 10 forward. And the bottom line is, we’re not taking it anymore.”

Negotiating for equality
Harrelson talks about Black Americans having to be in constant negotiations – whether or not to take a drink at a water fountain or ride the bus or be educated – for equality. For her, the Black Lives Matter movement exposes White people to this reality.
“What to them is a privilege, to us is a negotiation. It’s a business deal,” said Harrelson. “I want one day to not have to say Black Lives Matter. I want one day to not use the words White privilege… I just wanna be able to come out and know that I’m a human being. And I don’t have to watch what I say, or when I’m driving I gotta slow down – not because I should by law, but I should because my color’s Black, and I don’t want my skin weaponized. ‘Cause I wanna see another day.”
Nowadays Harrelson goes to the Square as often as she can, greeting visitors as she sees them. On the day of this interview, she spoke with people from California, Colorado and St. Paul. A Sudanese gentleman from Australia who attends Harvard University. A Minneapolis educator on strike. Rochester, Minn. Detroit, Mich. They are simple exchanges that uplifts Harrelson and leaves a lasting impression on those she’s touched.
“You see something in the news, you’re able to meet Angela, with all she’s experienced, [and see her] show up with so much love. It’s powerful,” said I Ling Thompson, who was visiting from Grand Junction, Colo.
Often, White people ask Harrelson, “What can we do”? She talks about the importance of having these conversations, something that just didn’t happen before. On this particular day, she encouraged a White woman to go into a Black hair salon, another to a Black church. To be okay with feeling awkward, but to recognize that it’s only because it’s different. To recognize that many Black people have been moving in White spaces for much of their lives.
Harrelson’s warmth and generosity of spirit is felt throughout the pages of “Lift Your Voice.” So is her determination. She’s blunt about the impacts of systemic racism, in her own life and as played out on the world stage in George Floyd’s murder. As she explains in the book, it’s not enough to care about racism, you have to act. “The main thing is to speak up when you see injustice.”
“Lift Your Voice” is a story of finding strength, holding onto hope and tapping into our collective humanity.
“Lift Your Voice: How My nephew George Floyd’s Murder Changed the World” is available in hardcover through most local and online bookstores, as well as on audiobook, spoken by Angela Harrelson.
More on the George Floyd Global Memorial can be found at georgefloydglobalmemorial.org.