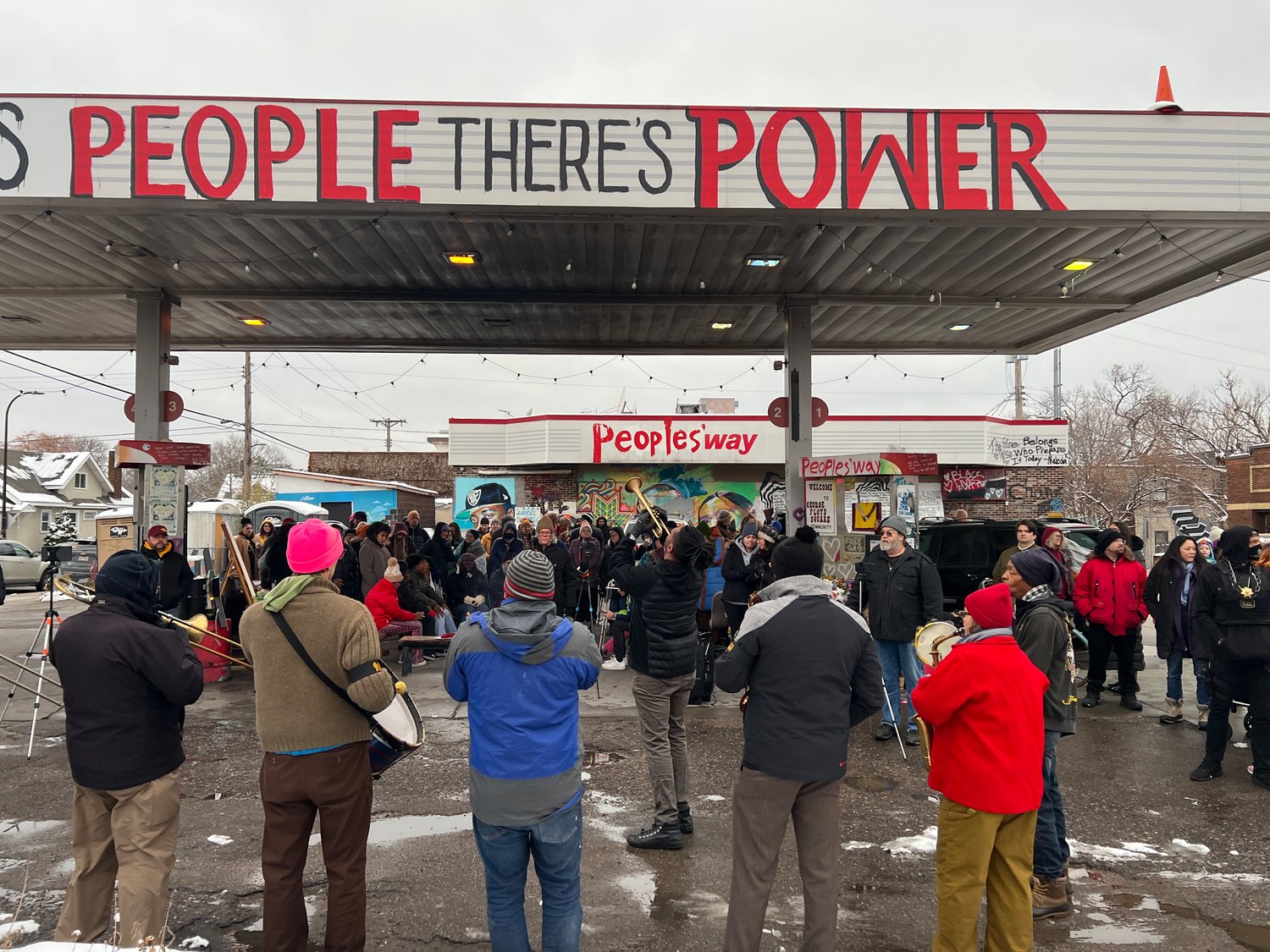 Brass Solidarity leads friends, family and community members in music and song at the Peoples' Way, George Floyd Square, to celebrate Tekle Sundberg on what would have been his 21st birthday Nov. 16, 2022. Sundberg was killed by Minneapolis police on July 14, 2022. (Photo by Jill Boogren) 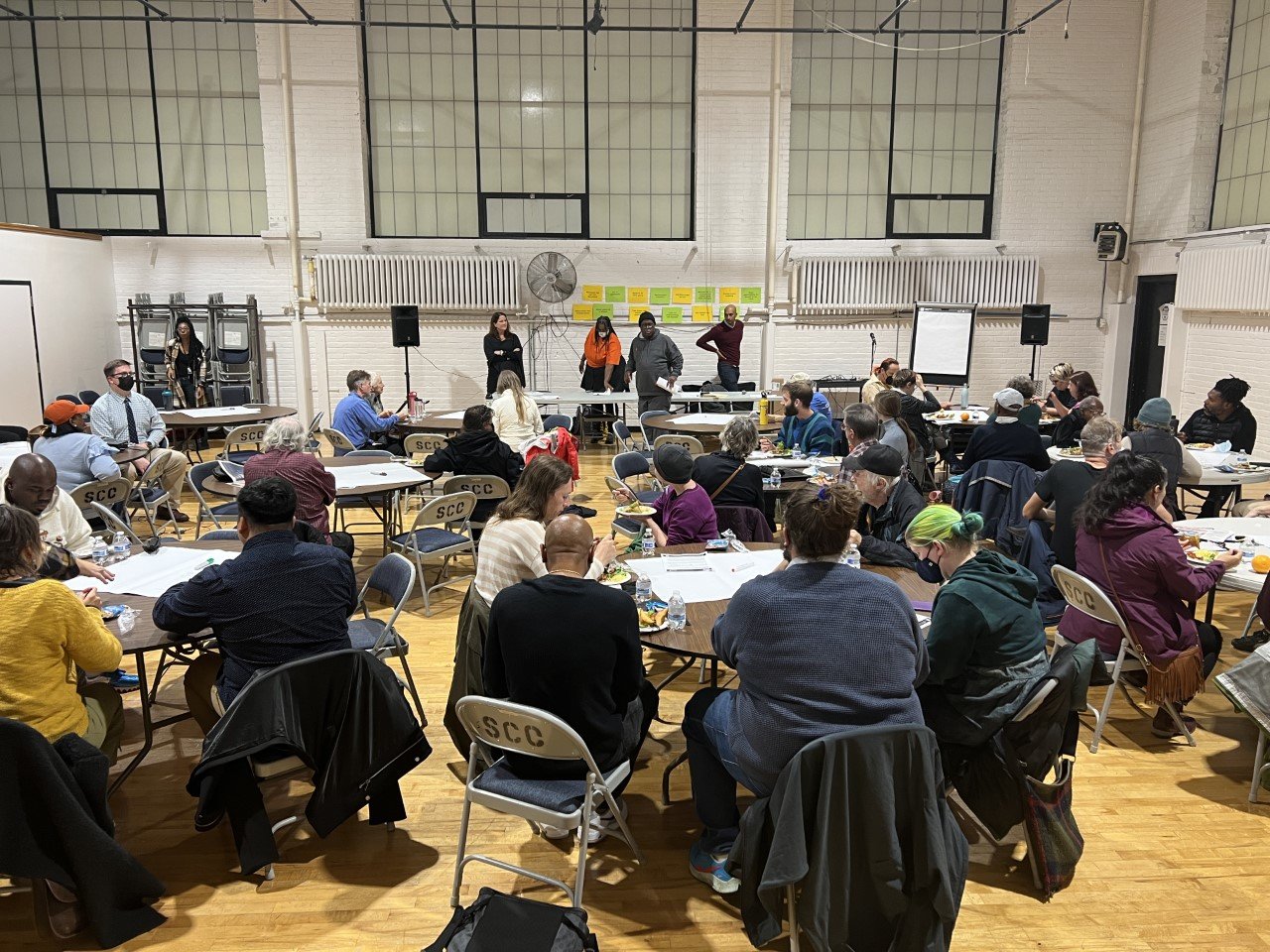 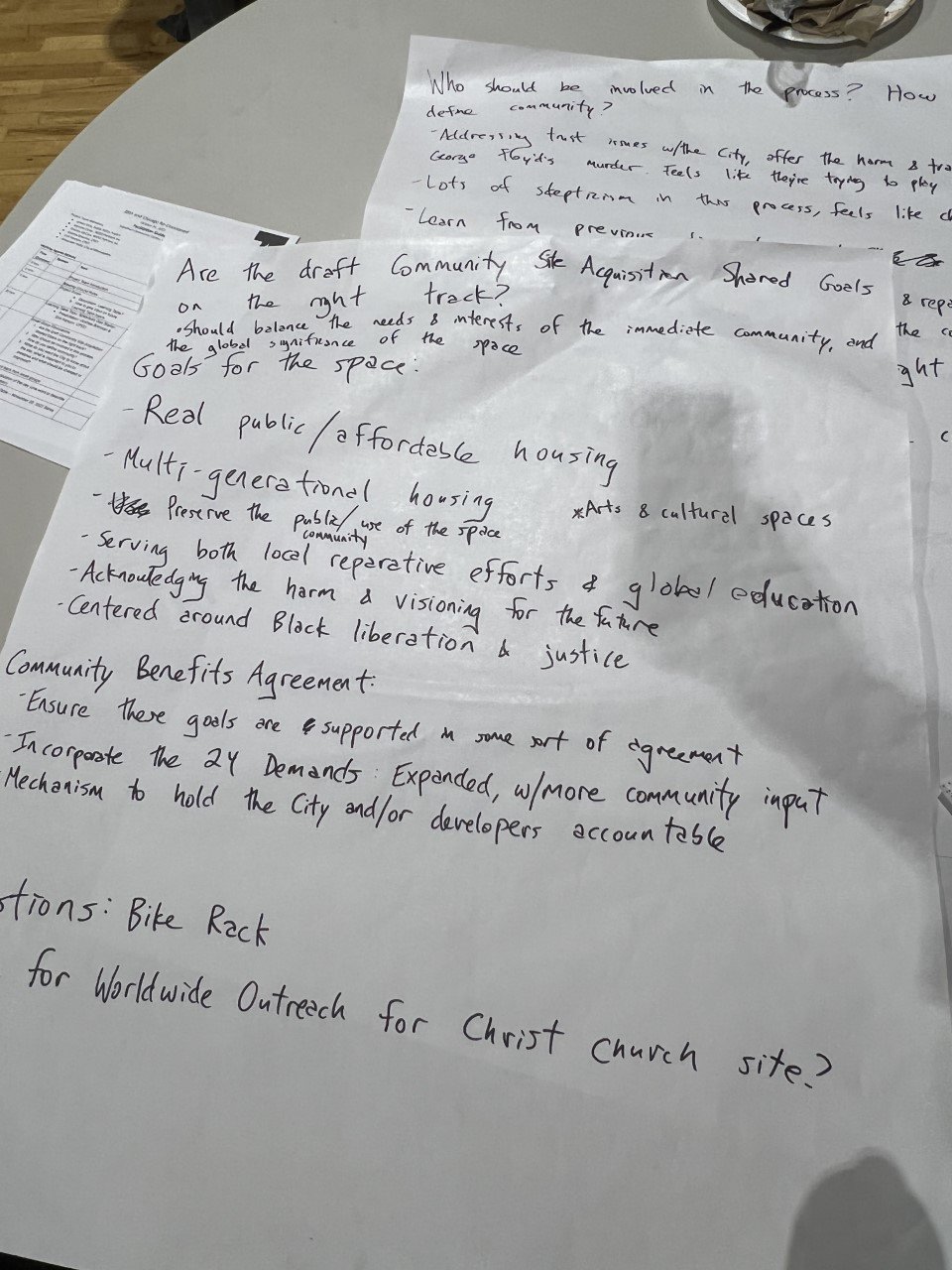 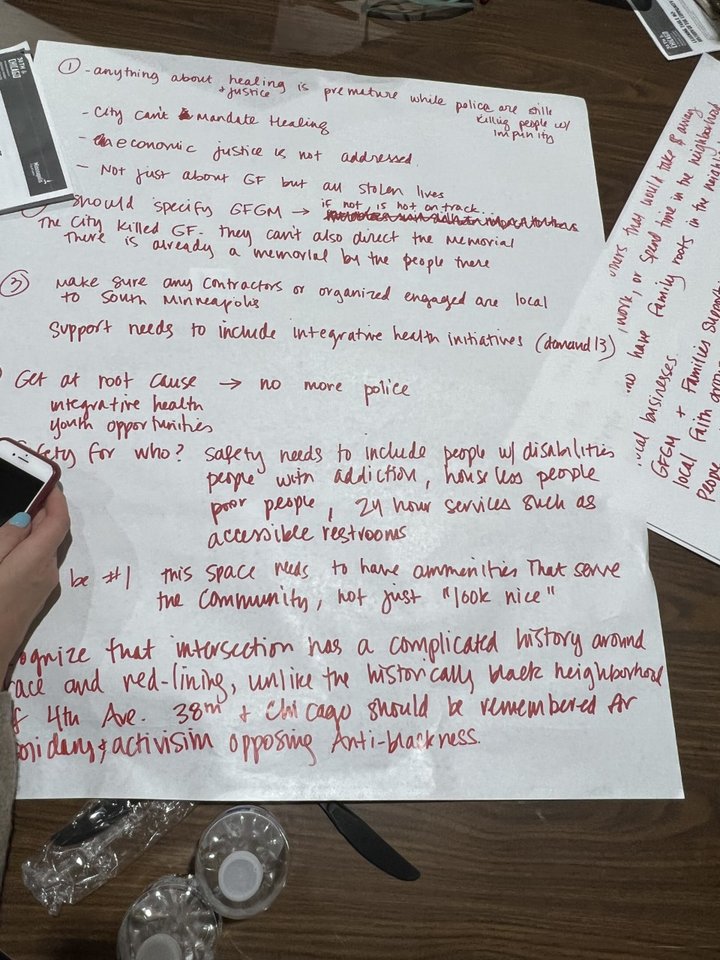 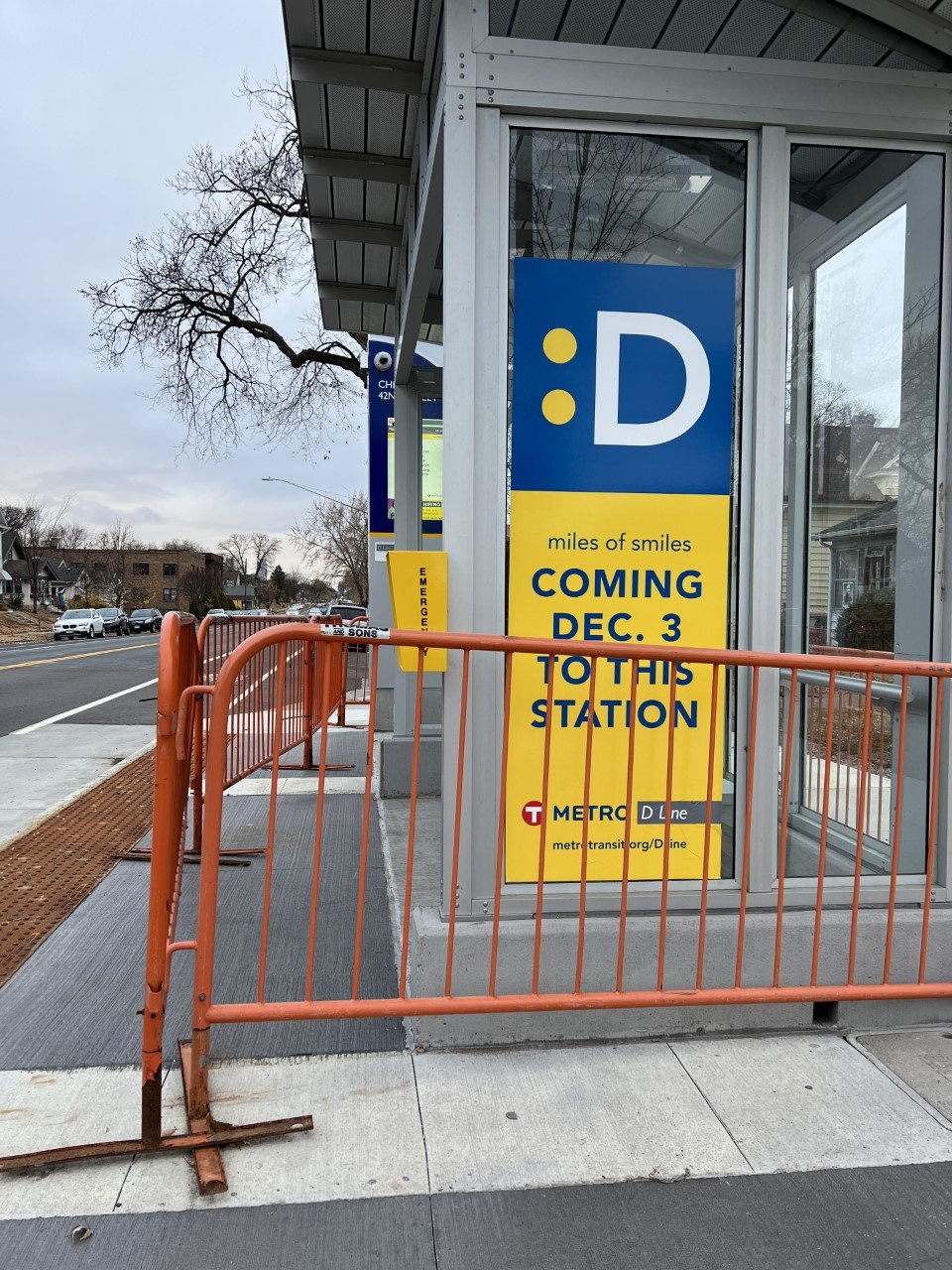 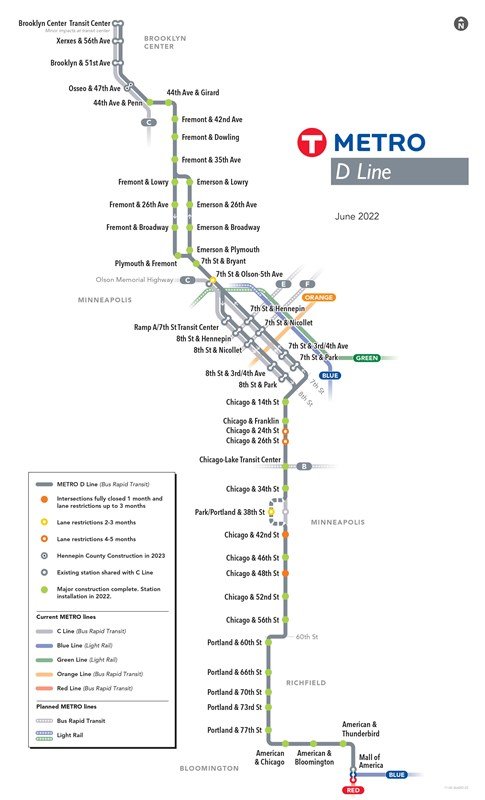 A third monthly Learning Table, which took place on Oct. 24, was focused on the city’s plans to purchase the former Speedway property. The 38th and Chicago project managers, though, have been clear that anything related to an adjacent property or a memorial does not fall within the purview of the road reconstruction project. What is not clear is how the city intends to separate the two. The largest memorial, to George Floyd, spills onto the street in front of CUP Foods, where he was killed. But the site holds other memorials as well, including to Daunte Wright, Imez Wright, Murphy Ranks and the 165+ lives lost at the hands of police whose names were painted on the surface of Chicago Ave. as part of the Mourning Passage that extends nearly the full block from 38th to 37th street.

The Community Co-creation Team, who is tasked with making recommendations to the project team including ultimately a final design concept for the 38th and Chicago project area, has been formed and has begun meeting monthly, first on Oct. 20 and again on Nov. 19. Listed among “key opportunities and influences” for the team to consider is “accommodation of multiple modes and functions – walking and rolling, biking, taking transit, operating vehicles including freight, commerce, gathering and community space, and green stormwater infrastructure.”

It is yet to be determined how the project team will accommodate all of the above modes of transportation or which they will prioritize over others. The intersection continues to draw people from across the country and around the globe who visit the site to see the memorials, leave their own offerings, pay their respects and support the movement for justice. Visitors often walk on the streets, as well as on sidewalks and through the Peoples’ Way. The City’s Complete Streets policy places an emphasis on pedestrians, bicyclists, transit, then vehicles – in that order.

At least one of those modes remains on hold at the intersection: public transit. With the Metro D Line rapid bus transit to begin service along Chicago Ave. on Dec. 3, buses will continue to be re-routed around 38th and Chicago. According to Metro Transit spokesperson Laura Baenen, future transit operations at 38th & Chicago are being discussed as part of the ongoing re-envisioning process for the intersection. “The timeline for that process is not being set by Metro Transit. We can say, however, that buses will not move through this intersection as the re-envisioning process continues,” said Baenen by email.

There are currently two bus detours, on Routes 5 and 23. Route 23 detours off 38th Street to 42nd Street between Bloomington Ave. and Park/Portland avenues. Route 5 currently detours off Chicago Ave. to Park/Portland avenues between 35th/36th streets and 42nd St. One Oct. 24 Learning Table participant said the re-routing of public transportation has added 10 minutes to his walk time.

Learning Tables are held for neighbors to discuss the 38th and Chicago reconstruction project, with different topics addressed monthly. They take place every fourth Monday of each month at Sabathani Community Center, from 6-8 pm, with dinner provided. The next will be held Nov. 28. An open house was also held on Oct. 22. Using paper illustrations, attendees designed the intersection the way they’d like to see it. According to project manager Alexander Kado, these and other materials will be posted on the project web page. For information, including public input, from all public meetings and open houses visit www.minneapolismn.gov/government/projects/38th-chicago-ave/

At a neighborhood meeting at Sabathani Community Center on October 24, Minneapolis’ Community Planning & Economic Development (CPED) agency announced plans to purchase the former Speedway gas station, now known as the Peoples’ Way, at 38th and Chicago. The city wants to secure the site – and assume liability – for a future use determined by the community.
“We do not have any intention of being the long-term owner here, unless it is determined that it makes the most sense for community-informed use,” said CPED director Andrea Brennan.
Director of Economic Development Erik Hansen said negotiations began in September and the property owner, California-based Realty Income, is interested in selling. A purchase could take place as soon as December.
Many residents were skeptical.
Jeanelle Austin, resident and executive director of the George Floyd Global Memorial, pointed out that what was first presented in the meeting as a “possible” acquisition sounded more like an intended one, and she questioned the swift timeline.
“Just to have one community feedback meeting feels like it’s being done to us as opposed to including us,” she said.
Bobby Hull asked, “Why should we trust Minneapolis?” He reminded city officials that the people took over the space after George Floyd was murdered. The property is across the street from where he was killed and has been the site of countless gatherings, including twice daily community meetings, for more than 900 days.
Other attendees echoed similar sentiments throughout the course of the evening, during which they broke into small workgroups by table and discussed prepared questions. Following the format of other monthly Learning Tables focused on road reconstruction at 38th and Chicago, a spokesperson shared thoughts and ideas from each group.
“I do agree that right now people should be apprehensive about the city owning the property without firm understanding of who the beneficiaries will be moving forward,” said Alexander Bourne. He suggested building up from the gas station instead, commenting that gas stations provide great entry level jobs. He felt that building up would still allow inclusion of the types of neighborhood services people were talking about; culturally relevant trauma resources, workforce development, a museum could all be added as additional stories above the station.
“It’s very expensive to knock down a gas station, dig it up and rebuild,” he said. “If the city has the money to do that, and they’re willing to allocate that money to that particular site, then they can repurpose those dollars and essentially build up.”
Dave Bicking reiterated that many do not trust the city to control this spot.
“You never asked us whether the city should buy it. That wasn’t one of the three questions. Obviously, that’s been decided,” he said.
The three questions small groups were asked to address were whether this was the right track, how community is defined, and what the city needs to know about the current site.

Essential services
A number of attendeees mentioned the fact that the site has become a mutual aid hub for neighbors and visitors.
“People come here for food, they come here for clothes and warmth, hydration in the summer… for books and vegetables,” said one speaker. “This is really important, and we’d like to see that preserved.”
Other speakers added that the memorial isn’t just for George Floyd, it’s for all stolen lives. In addition to Floyd, the Peoples’ Way alone holds memorials for Hardel Sherrell, Paul Castaway, Fong Lee, Winston Smith and Amir Locke.
Agreeing with the location as memorial, another speaker wanted it to remain a place of racial healing where people could have a sense of community while honoring the ongoing movement. He suggested modeling the space after the Lorraine Motel in Tennessee, where the Rev. Dr. Martin Luther King, Jr. was assassinated in 1968 and which is now a National Civil Rights Museum.
Referring to both the process and purchase, Tim Lunning said simply, “I do not consent.”
“When you start from a position of ‘You can’t please everyone’ [paraphrased from a sentiment expressed by the meeting facilitator], it means someone is going to be excluded,” he said. “I’m worried about who is displaced from this process.”
CPED plans to take the action through the City Council’s Business Inspections Housing and Zoning Committee on Nov. 29. Then the full City Council will review it on Dec. 8. According to Hansen, they are on the timeline of the seller, who would like to close before the end of the year. Costs were still being finalized.