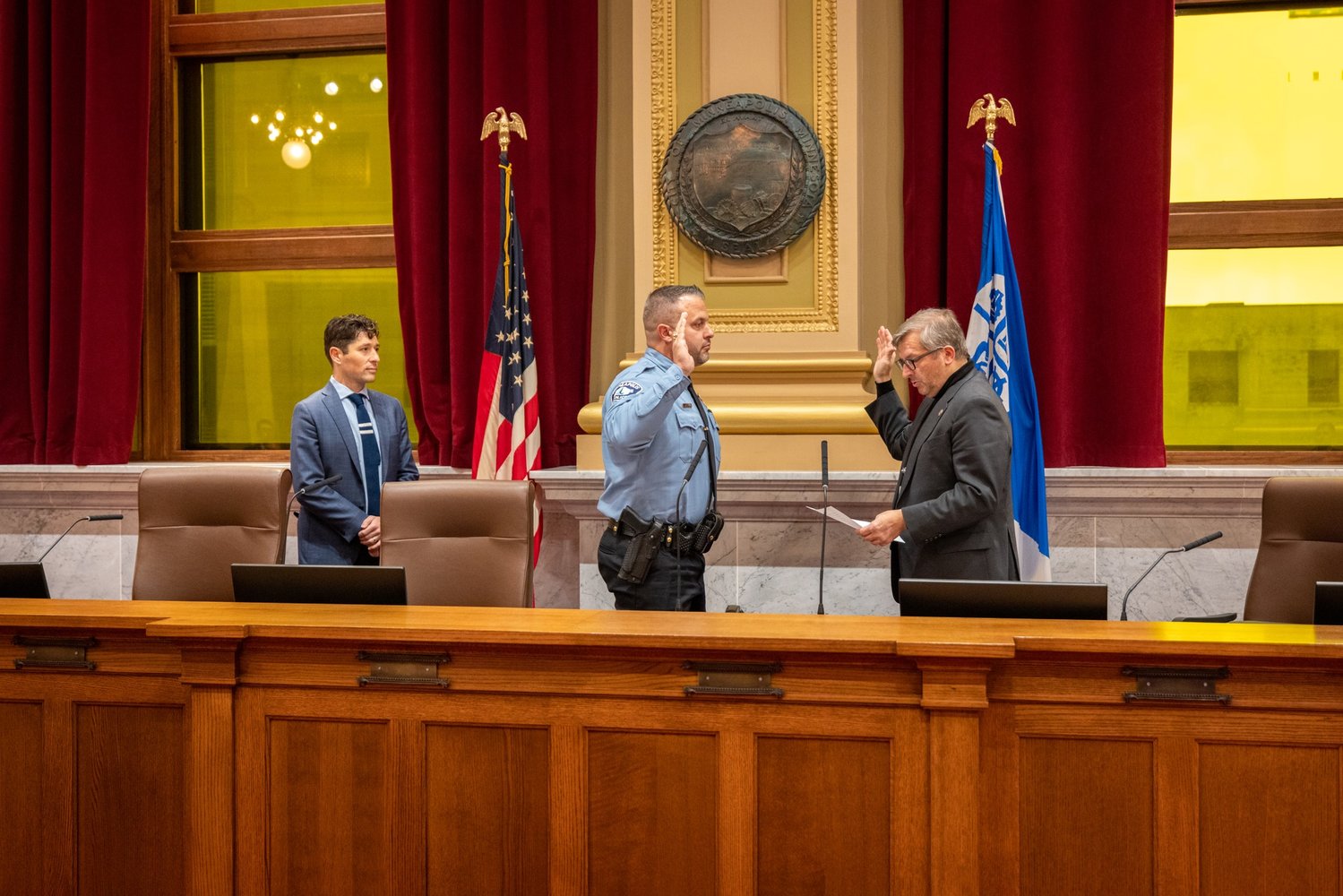 With words of praise and hope, the city council unanimously approved Mayor Jacob Frey’s nomination of Brian O’Hara to be the next Minneapolis Police Chief on Nov. 2, 2022.  He was officially sworn-in on Nov. 7 to serve a term ending January 2026.

Brian O’Hara, age 43, is from Kearny, N.J. and graduated from Kearny High School in 1997.  In 2001, he joined the Newark Police Department and became a captain in 2016. From 2017-2020 he led the department’s consent decree and planning division and worked on implementing a court-ordered consent decree between the Department of Justice and the City of Newark.

As deputy mayor, O’Hara applied for the police chief positions of both St. Paul and Minneapolis.

Local news outlets also wrote about him and his work in Newark including Minnesota Public Radio (MPR) which found many willing to praise his work, They reported that, “The city of Newark denied a request from MPR News for O’Hara’s personnel and disciplinary records.”

At the public hearing held on Oct 26, 10 people spoke to the council committee. Those from the Minneapolis Chamber of Commerce, the Downtown Council and a few individuals spoke in favor of the appointment. A few others came to express concerns about policing and police oversight in general and some to share regrets that the city was not hiring someone from within the department, like interim chief Amelia Huffman who O’Hara’s has now named to be the acting assistant chief.

Following the hearing, O’Hara talked about his record in Newark that included a time of fewer arrests, recovering more firearms, and a year when no officer fired their gun while on duty.

When asked about next steps, during the lengthy questioning session with council members that followed, he said, “I have to start now to be present as much as possible in community to get to know as many people as I can, to listen, to hear what community expectations are throughout the city, but to also to be present among the rank and file officers to hear what their concerns are and give some validation to the trauma they have been experiencing.

“It is absolutely imperative that a police chief be present in community,” he said.

He committed to holding officers accountable with consequences quickly following misconduct. When asked about discipline records and the need to review them before making promotions, he said, “The best practices in policing is that we should be reviewing the discipline record of any member before they are promoted but especially when they are in sensitive positions in the agency.”

On retention and recruitment he shared his belief that “the officers that remained are more likely to be committed to reform,” and that recruitment might improve as prospective officers see working for Minneapolis as a chance to be “part of the solution right now.”

Before casting her vote at the full council meeting on the Nov. 3, Ward 7 Council Member Lisa Goodman said, “I’ve been skeptical of outsiders coming into the department because I did not believe is was right to not promote, if it was possible, from within. I have been a very strong supporter of interim Chief Huffman who is a friend, colleague and constituent. I think that she stood up when she had to when she was thrust into this position and that she did an admirable, not perfect job. However, the moment is different now and everyone can feel that, and bringing in someone from the outside, I believe, makes a lot of sense.”

For council members, their meetings with O’Hara appeared to make a difference.

“Over the past few weeks, I was able to connect with Brian O’Hara one-on-one, and at several community meetings, and I was able to build a relationship with him and see him build relationships with community members across the City of Minneapolis,” said Ward 11 Council Member Emily Koski.

“I have been able to have several conversations with him and am impressed with his vision for the Minneapolis Police Department,” wrote Ward 13 Council Member Linea Palmisano after the vote. “His experience implementing a consent decree in Newark, N.J. makes him uniquely qualified to do the same here in Minneapolis. The top qualities that I feel are the most important for our new chief are a proven ability to lead a department that is building trust within and accountable to the community, and that can also reduce crime at the same time. I believe Mr. O’Hara has demonstrated that he can do both and I look forward to working with him here as our next chief.”

Goodman said that if she hadn’t met with O’Hara and heard about his observations and the culture change he felt was required, he may not have earned her support.

Before casting her vote, Ward 10 Council Member Aisha Chughtai talked about the two-hour walk and conversation she had with O’Hara. Speaking directly to him at the meeting she said, “I see you truly and deeply prioritize matching your words with your actions.”

Jenkins said that her vote was based on his support for “alternatives to policing as a part of a broad and comprehensive public safety continuum.”

“This community holds incredible hope for you and this department,” said Goodman to O’Hara from the council dais. “The moment is heavy, not celebratory.”

“No one person can change an institution. No one person can undo centuries worth of harm,” said Chughtai, “but it does take people who are willing to authentically and deeply engage with everyone.”