News for everyone, delivered to everyone
GEORGE FLOYD SQUARE 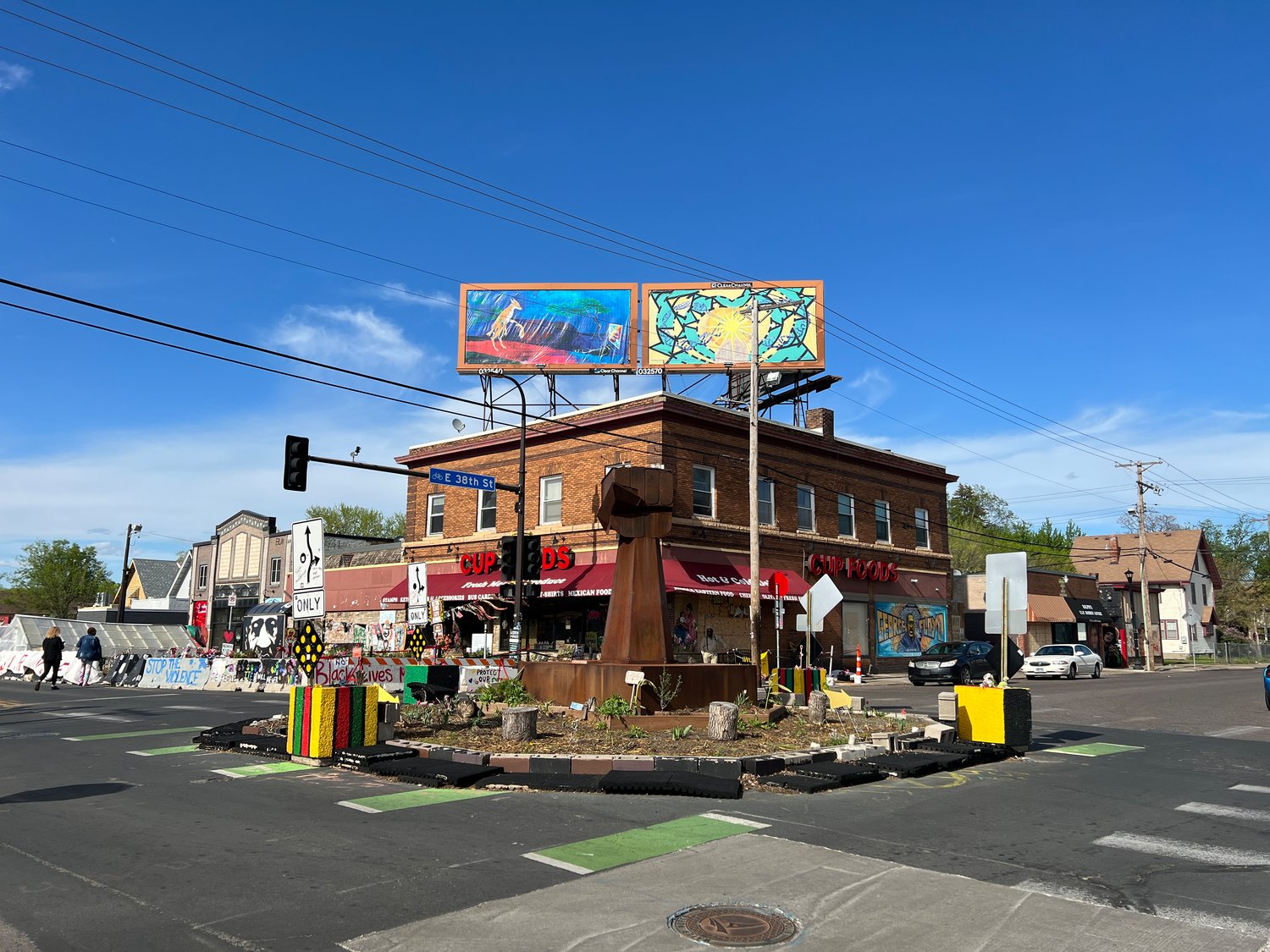 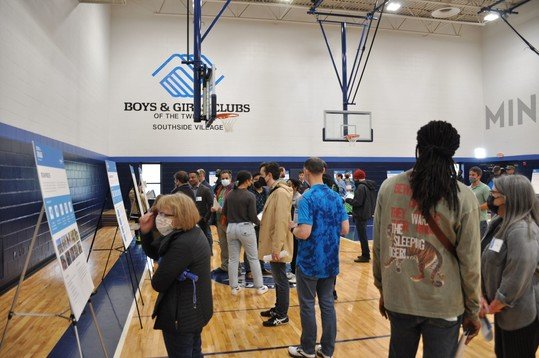 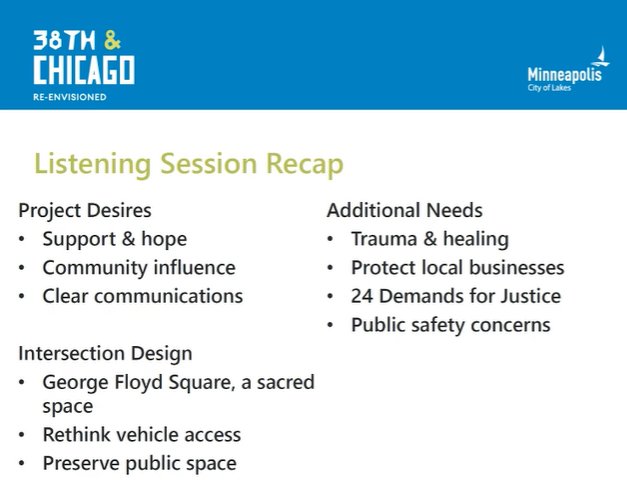 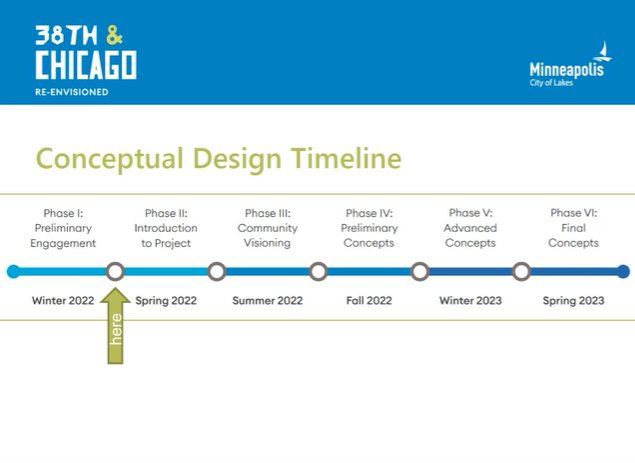 - Information from city of Minneapolis

Questions about community input, justice and preservation of the George Floyd memorial dominated feedback at a public works virtual meeting on future reconstruction of 38th and Chicago on April 26, 2022. It was one of two open houses – the other held in person at Phelps Park – that marked the start of a year-long process intended to redesign the intersection.
According to the city of Minneapolis, the streets were built in the 1960s and have “exceeded their useful life.” The project encompasses 38th St. from Park Ave. to 10th Ave., Chicago Ave. from 37th St. to 39th St., and sidewalks.
Minneapolis City Council President Andrea Jenkins and Council Member Jason Chavez, whose wards 8 and 9 include George Floyd Square, and project leaders vowed to involve the public throughout the process, something Minneapolis Public Works Director Margaret Anderson Kelliher acknowledged is not usual practice.
“Lots of times what happens is that we bring out pictures and drawings to communities and say, ‘Here’s what we have. React to it.’ Here we’re asking for your input from the beginning of the process,” she said.
Much of the meeting was devoted to explaining how the community could participate – a notion that was met with a fair amount of skepticism.
About 80 attended the virtual meeting. Many of those who submitted comments remained anonymous.
A couple participants suggested that the city has a history of ignoring community input, as with its 2021 postcard survey that was limited to two design options, neither of which reflected the wishes of community members who wanted to keep the intersection closed to vehicle traffic.
Project manager Alexander Kado commented that the postcards were regarding an “interim design,” implying it had no bearing on this project.
“This is the first time the city has comprehensively engaged the community stakeholders around what the future of this intersection should be. We’re outlining a year-long process to do that,” he said, and encouraged people to share their opinions.
Deputy project manager Trey Joiner gave an overview of community involvement, which to date includes an online engagement survey and listening sessions with about 30 stakeholders. Focus groups and other public meetings will be held this summer, with preliminary concepts shared in the fall. The city also plans to establish a Co-Creation Team that would meet monthly to review information and recommend a preferred final concept to the project team. There were no details yet on the selection process.
Asked who would be the decision maker if there is a difference between what the community and other stakeholders want, Joiner said it would be up to the mayor and city council.

Justice
George Floyd Square continues to be a site of pilgrimage and protest against racial injustice. An attendee asked why justice wasn’t one of the design goals.
“I think justice could become one of the engagement goals if there’s enough support for that,” Kado replied.
Another asked what the city is doing to address the 24 demands in Justice Resolution 001, which Kado recognized as a recurring theme in listening sessions.
Asked to what extent the Square will be policed, Kado acknowledged the history of tensions between police and POC communities and said the murder by police of George Floyd – and more recently of Amir Locke - highlighted these problems. (This meeting was held one day before the Minnesota Department of Human Rights released its finding that the Minneapolis Police Department engages in a pattern or practice of race discrimination, in violation of the Minnesota Human Rights Act. See related article starting on page 1).

The memorial
A number of people had questions about preserving the memorial and keeping the Square a sacred space – especially if the memorial is treated separately from road reconstruction.
Kado recalled an interviewee who said racism always seeks to erase history.
“As I’ve thought about this project and what a reconstruction project is, you’re literally ripping up the pavement,” said Kado. “It’ll require further understanding around what a memorial looks like in that space and how we preserve and protect instead of erasing that memory.”
One attendee asked if public works is coordinating with the George Floyd Global Memorial (GFGM) to ensure that the memorials are not disturbed and that guests can safely grieve and reflect.
According to Kado, the memorial process is still not defined and there are no plans to remove any items that are out there.
“This project won’t be successful, nor will it ever be implemented without having more concrete plans in place around the memorial,” he said.
There seemed to be a departure from the community-led approach when it came to “art” in the space, which GFGM considers offerings to the memorial. On the one hand, public arts administrator for Community Planning & Economic Development (CPED) Mary Altman, praised the groundbreaking work of GFGM caretakers to conserve the pieces. On the other hand, Altman said it’s likely the city will commission art as part of the process and that the city would bring on an artist or artists “to help build the vision for public art at the site.”
The Minneapolis Arts Commission would have a role, and, as Altman described, it’s a “complicated” process engaging and contracting with artists and getting the necessary approvals.
An attendee commented, “It sounds as though when talking about the city commissioning artworks or art being approved by the arts commission, the city’s planning on complete control, despite saying it’s led by a community-led process.”

Design
There were several calls to explore closing the intersection to vehicular traffic.
“We know a pedestrian plaza, pedestrian-only area, is very popular,” said Kado.
Public works will also explore transit through the intersection. The D-Line was originally slated to go through there, but according to Kado, those plans have been removed from the reconstruction and the D-Line is on detour routing. This is the same for the 5 and 23 buses which used to go through the intersection.
“This project will really determine if and how transit does come back to this space,” said Kado.
There were a number of questions about other concerns – such as adjacent properties and businesses, faith-based organizations, air and water quality – that the project team said fell outside their purview.
About 50 questions still remained at the close of the two-hour meeting. According to Kado, no immediate changes are planned for the intersection this summer. Construction would begin in 2024.
For information and to subscribe to email updates visit www.minneapolismn.gov/government/projects/38th-chicago-ave/