This year 13 of the 20 SW neighborhood organizations will receive under $20,000 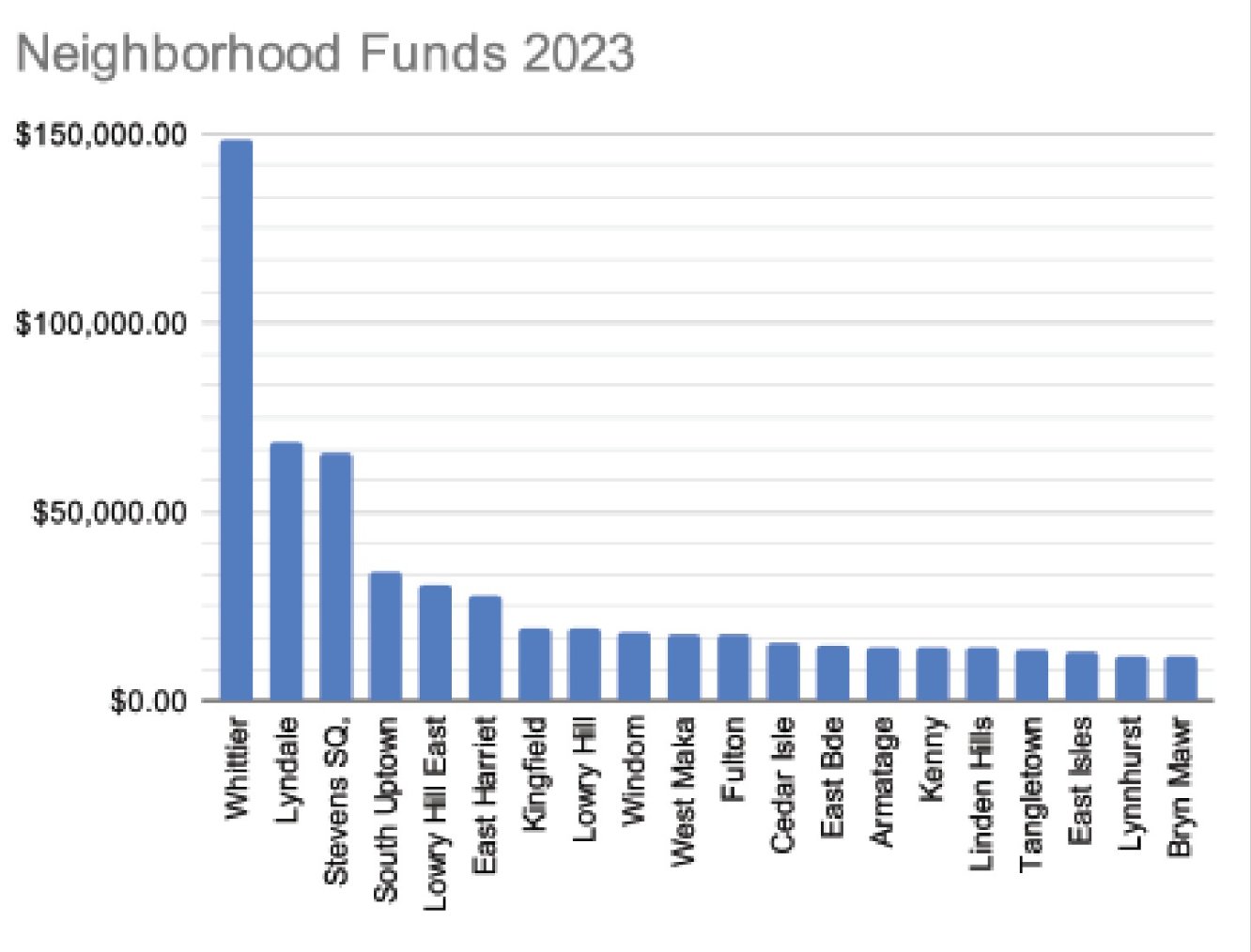 Next year many neighborhood organizations in Minneapolis will be receiving less financial support from the city than they have for years, or even decades. While all 20 southwest neighborhood orgs received over $20,000 last year, 13 are set to get less in 2023 under the mayor’s proposal. Bryn Mawr is the lowest with $11,943.

“The Armatage Neighborhood Association (ANA) will receive just $14,131/year in funding from the City of Minneapolis starting Jan. 1, 2023 compared to $31,263/year in 2020 unless more neighborhood funding is approved,” said a statement issued this month from the association. “While we support the city’s new funding requirements, greater focus on equity, and shifting more funding to our neighborhood colleagues in areas of the city that need it most, the ANA’s $14,131 per year in city funding will make it very difficult to maintain the basic services we provide to residents.”

The mayor’s proposed budget for 2023 includes $3.1 million allocated through three dedicated funding programs specifically for neighborhood organizations. That includes $840,000 in the Neighborhood Network Fund, $2.16 million in the Equitable Engagement Fund, and $100,000 in the Collaboration and Shared Resources Fund. Last year these three funds received over $3.7 million.

The Neighborhood Network Fund is designed to support the day-to-day operations of the city’s network of 70 neighborhood organizations. These funds can be used for the administration and operating expenses and provide the same base level of funding for each neighborhood. This fund is proposed and scheduled to be reduced to $10,000 per neighborhood in 2023 from the $20,000 the council approved for this year.

The Equitable Engagement Fund will increase by roughly $170,000, bringing it to over $2 million. This fund goes to neighborhoods in varying amounts based on their designation as an area concentration of poverty, evidence of gentrification, and the number of cost burdened households. The funding is provided to support activities that focus on equity and increased participation in neighborhood decision-making. Next year some neighborhood groups will see an increase in funding from this source, including the Whittier Alliance which will go from $147,384 in 2022 to an estimated $148,266 in 2023 when the network and engagement funding is combined. Whittier will be receiving more that any other neighborhood in the city, ahead of Cedar Riverside, projected to receive $111,052, and Jordan at $98,111.

The Collaboration and Shared Resources Fund provides resources to support the consolidation or the sharing of resources among neighborhood organizations.

Kenny is among the neighborhoods whose funding will be decreased. “This is a very difficult time for neighborhood organizations, ours as well as many throughout the city,” said John Erickson who co-chairs the Kenny Neighborhood Association Board. He noted that at a time when residents are asking more from the neighborhood organization, “We are feeling a real squeeze. It’s a real challenge.” To address the cuts, Kenny has been looking into corporate sponsors for events, selling ads in their newsletters, and working with other associations to share event costs and administrative expenses.

Funding used to be $20 million a year

The amount of overall funding going to neighborhood groups is lower than it has been for decades. From 1990-2010,  after the Neighborhood Revitalization Program (NRP) was established as a joint initiative by the state legislature and city council, $20 million a year was dedicated to support neighborhood groups and projects. Over a 20-year period of the program, $400 million was spent through neighborhood associations.

When the program ended in 2011, the city started a new department, the Neighborhood and Community Relations department. Prior to creating the Neighborhoods 2020 program with its four funding streams, the city created the Community Participation Program. At one point a city work group recommended a funding level of $10 million a year for neighborhood support with a higher minimum, but the city council at the time directed staff to cap it at $4.1 million.

Sarah Linnes-Robinson, who works with both Lyndale and Kingfield neighborhood groups, points out that some neighborhoods are still relying on NRP reserves, or revolving loan funds, to cover costs. “In my understanding the city council direction was to establish the Partnership Fund and to also fund the neighborhood associations at $25,000 minimum per year,” she said. “If the base funding does not increase, it will soon cost as much in administrative overhead to accept the funds as we receive from the city, so in my opinion, it is just a matter of time as old NRP funds are depleted before many groups decide that it isn’t worth taking the funding from the city at all.”

Linnes-Robinson is also skeptical about how effective the partnership funding program is. “I receive a handful of cold calls the week before each application cycle asking me to partner with various groups. When I respond that a partnership to me means they need to work with me to develop their workplan for the grant period and also provide outreach and information with the neighborhood they are asking to partner with, most don’t bother to call me back,” she said. “Through the Partnership Funds, the city is funding many inexperienced programs and asking for zero accountability, and running many of these funds and the responsibility for these projects through the experienced neighborhood groups without providing financial compensation to us.”

Losing a critical part of what  MAKES the city unique?

With Kenny set to receive only $14,131 (from roughly $23,000 this year) from both the network and equitable engagement funding, Erikson said, “As a board we don’t know where we will be. Keeping the base funding at $25,000 would make a tremendous difference. We would be able to continue and expand services and help provide a stable and welcoming neighborhood environment.” He believes that a strong neighborhood organization can help build a local support system that can help improve mental health, address crime and safety and can “take pressure away from citywide services.”

The Armatage board also stressed the importance of neighborhood groups and safety. “Neighborhood organizations are also an important part of Minneapolis’ community safety network. We know, through direct experience, as well as empirical evidence, that knowing and connecting with your neighbors leads to safer communities.”

They wrote, “Over the decades, neighborhood organizations have connected not just neighbors with each other but to their elected officials, resources to help address needs, educational programming, and more. As the city budget continues to reduce financial support for many neighborhoods in favor of non-geographic-based organizations, we risk disenfranchising large sections of the city, cutting communications between the people and the decision makers, and losing a critical and irreplaceable part of what makes Minneapolis unique and special.”

Linnes-Robinson said, “The cutting of off funding is a way to kneecap the neighborhood associations and remove the ability for us to be there if, or when, a community crisis arises.”

The city council will be considering amendments to the mayor’s proposed budget in the weeks ahead, but so far it is unclear if any work is being done to make any changes in funding to neighborhoods.

“It’s too early for me to say whether or not I plan to make amendments to the mayor’s 2023-2024 recommended budget,” said Ward 11 Council Member Emily Koski. “I absolutely support neighborhood organizations and know the value that they bring to the City of Minneapolis. I really do believe neighborhood organizations are what bring neighbors together, and what bring communities together.”

Give input at public hearings