Only two of 100 comments ask that spending be lowered, while rest ask for focus on racial and transgender equity, sustainability, and more 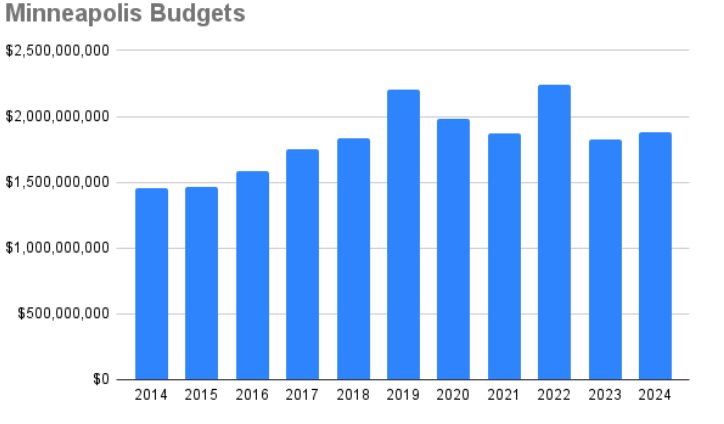 Despite an increase in the budget proposed by the mayor and with property taxes likely to increase for many property owners, only two of the nearly 100 comments received by the city so far have called for lowering spending.

Mayor Jacob Frey has proposed increasing the city budget to $1.66 billion in 2023.

In November, the city council held two public hearings on the 2023 proposed city budget. It is preparing to consider amendments in the first week of December with budget approval set for Dec. 6.

The mayor has recommended a 6.5 percent increase in the property tax levy, which will rise to $27 million in 2023. Because residential markets grew quickly into 2022, while commercial values did not, city staff project that the proposed increase will result in an average home property tax increase of $167 a year. The actual amount will vary greatly depending on a specific property’s value, but the larger increases are projected to be in Wards 1, 4, 5, 8, and 11, with slightly lower increases in 9 and 12.

During the public hearings, the comments, and apparent organizing, focused primarily on increasing funding in a variety of areas. Most speakers called for more support for community needs. These included: immigrant support, affordable housing, street lighting improvements, neighborhood association funding, public safety alternatives to police, opioid epidemic response, and addressing climate change. Several speakers asked for funding for additional staff to support racial and transgender equity, sustainability, 911, the legislative work of the council, the Office of Performance and Innovation, and the behavioral crisis response teams.

Over the two hearings, seven people identified as being part of the Minnesota Immigrant Rights Action Committee (MIRAC) and Centro De Trabajadores Unidos En La Lucha (CTUL) and asked for funding to cover the costs of Deferred Action for Childhood Arrivals (DACA) application fees for residents who need it, and to implement the municipal identification program that was approved in 2018. The DACA application fee of $495 is required every two years for some residents to legally remain in the United States. “The least that we can do to show our support in our city and our community is provide them with financial relief,” said Julia Pearlstein from Powderhorn.

Silvia Martenez, with CTUL, urged the council members to “fund the Minneapolis Municipal ID program passed in 2018 to make IDs available to all city residents regardless of immigration status this year.”

In November of 2018, Frey recommended spending $200,000. At the time many hoped that the cards would improve the community’s relations with law enforcement, and also be used as a transit pass, library card and official ID to open a bank account. At least three banks had already agreed to accept it as valid ID. According to the ordinance, they would be available to any resident who is at least 13 years old with proof of residency and two identification documents.

At the hearings this year, the council also heard from 13 people who indicated that they were part of Black Visions. This was the largest number of people coming from any identified group. Julia Johnson called on the council to help “safely house every one of our unhoused. Fully fund the Office of Violence Prevention and the behavior response teams.” She, and many others, called for funding for youth and gun control and counseling, as well as support for community-led alternatives to policing and comprehensive plans to address the climate crisis. She also urged the council to use a more inclusive “participatory budgeting” process in the future where people could be involved up-front in the development of the budget and not just reacting to it in the last weeks. “Fund our communities,” said Johnson. “Frey’s budget gives pennies to address the crises we face.”

Lake Street and othEr PRIORITIES

On the 15th at least four student representatives came from the University to support pedestrian lighting near campus, and especially in Dinkytown. Another a handful of residents from Cedar Riverside and one from Nokomis spoke up for more youth programs and for what Farhia Budul from Ward 6 called “culturally responsive addiction recovery support.” Several talked about friends and family they lost due to drug use.

At both meetings someone from the Lake Street Council came to present specific recommendations about how the city budget could better support the recovery and revitalization of Lake Street. Allison Sharkey spoke on the 10th and Russ Adams on the 15th. “Our neighborhood commercial and retail corridors have not fully recovered from the multiple impacts of a two-year pandemic, a sudden recession, a tragic racial reckoning that reverberated across the globe, extensive property destruction due to the Civil Unrest of 2020, a diminished customer base, and ongoing negative public perceptions about public safety,” they wrote in a letter they submitted along with their testimony. They asked for over $20 million to support the corridor with marketing, public realm maintenance, municipal sidewalk snow clearance on pedestrian priority network corridors, increased training and technical assistance for small business owners, façade improvements, income replacement grants to BIPOC-owned restaurants that were shut out of the federal program, a new safety center, and, pilot ambassador program along the Lake Street corridor similar to the downtown ambassador program.

Ward 2 Council Member Robin Wonsley is one of the few council members who has shared her thoughts on the budget since the hearings. “The clearest themes I heard in testimony were demands for increased funding and action around basic needs like housing, substance recovery, transit, education, and mental healthcare” wrote Wonsley in an email update after the hearings.  “I heard frustration for our city’s continued unconditional investment in MPD and a demand to expand comprehensive services and programs to prevent crime, de-escalate, and heal the community. I take the testimony I heard very seriously and will use it to shape my proposed amendments to the budget.”

The council’s budget amendment meetings will be held on the mornings of Dec. 1 and 2, followed by a final public hearing starting at 6 p.m. on Dec. 6.