News for everyone, delivered to everyone
Hennepin Ave design: Helpful or hurtful? 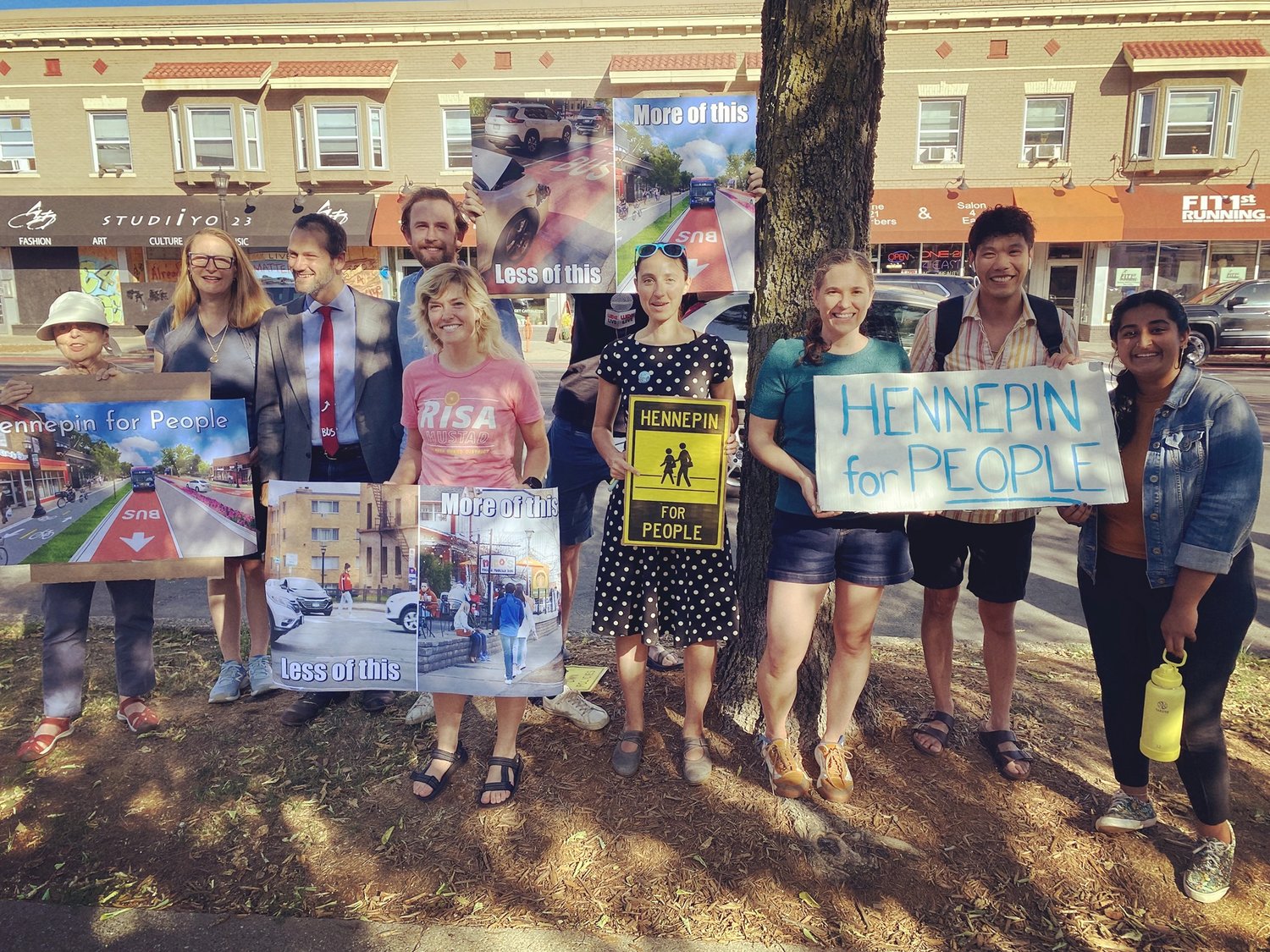 Hennepin for People has drawn people together at various events to inform and educate on the project. (Photo submitted)

Right now, this part of Hennepin Ave. has 4 lanes of traffic with parking on either side. A bus lane takes over the parking lanes at specific times of the day. Under the new proposal, this will change significantly.
Tesha M. Christensen 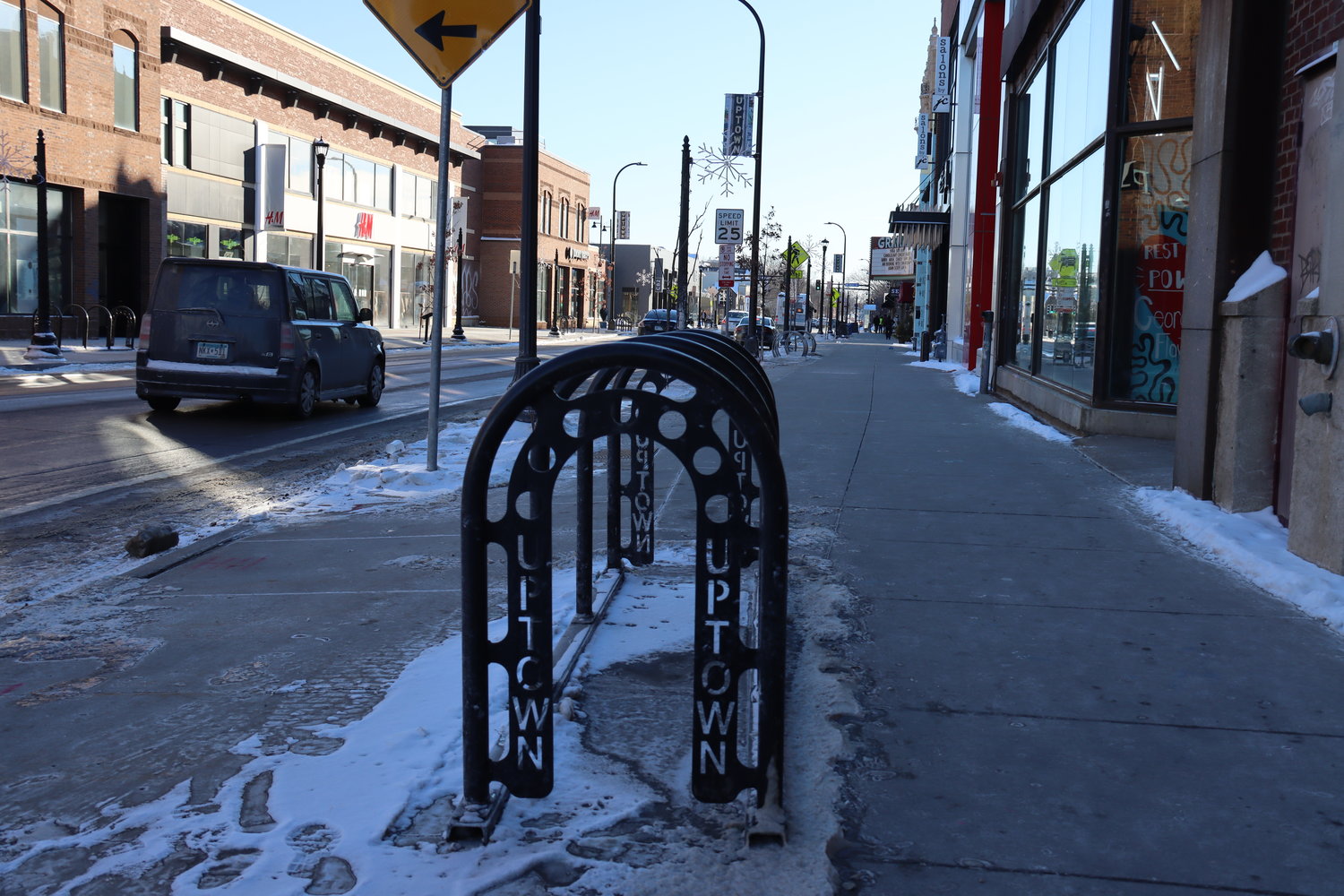 This section of Hennepin Ave. South between Lake and 31st was the first phase of the project. All the parking was removed and bike lanes added on each side. The concrete sidewalks were widened.
Tesha M. Christensen 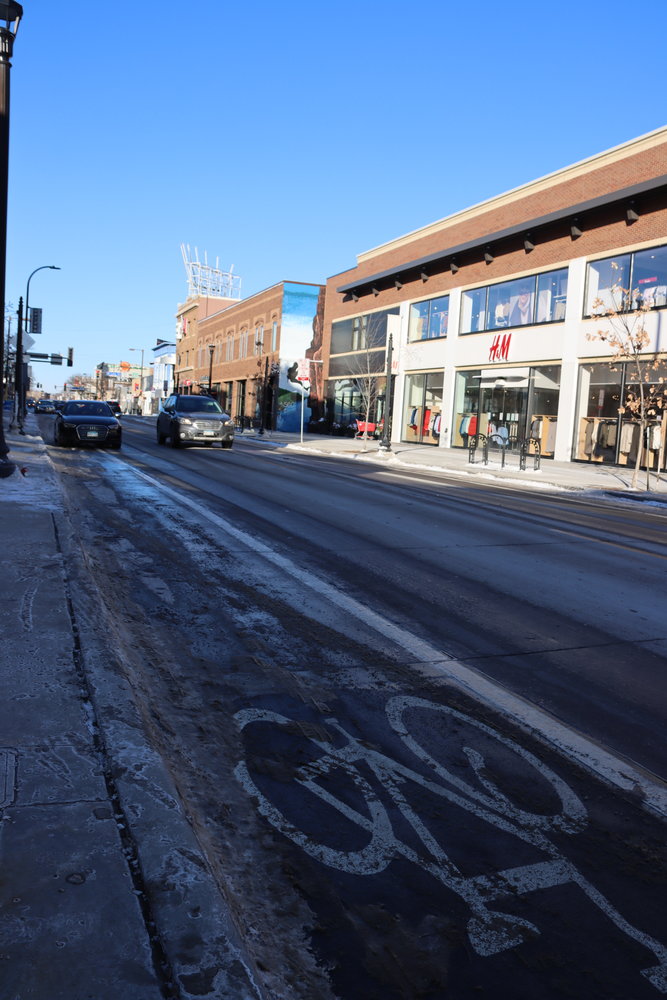 This section of Hennepin Ave. South between Lake and 31st was the first phase of the project. All the parking was removed and bike lanes added on each side. The concrete sidewalks were widened.
Tesha M. Christensen
Previous Next
Posted Saturday, January 8, 2022 10:00 am
By Tesha M. Christensen

As woman of color, Wedge resident Chandra Lalla says she knows how “our streets don’t serve everyone well.
“For generations, city streets were built solely with car travel in mind, at the expense of the Black, Brown, and Indigenous communities who experience the most traffic related fatalities (followed by seniors and children). I want a reconstructed Hennepin that ensures safe and comfortable passage for everyone who uses the street on a daily basis, no matter how they travel. And if you depend on your car, I care about your safety too. Nobody is served well by the high speeds and reckless behavior encouraged by the existing design of this street.”
She co-founded Hennepin for People in order to support a street that values people who walk, roll, bus, bike, and drive.
“Based on crash data, the city has designated Hennepin Avenue as a high injury street; the current layout doesn’t serve anyone well. I am excited about the recommended layout especially with the future E Line Bus Rapid Transit. During rush hour, 49% of the people in vehicles on Hennepin are in buses; this is why 24/7 bus lanes are absolutely essential – transit riders deserve priority. Our population is growing and we should use the limited space we have efficiently. We can’t compete with suburban shopping centers on parking availability. But we can and should embrace what makes this area special: the density of people and destinations, and the choices we have for how to travel.”
Lalla has lived in the Wedge area for 10 years. “I choose to live here because it’s walkable to grocery stores, shops and other destinations. It’s also served well by transit and has good biking infrastructure. I mainly experience Hennepin on foot or transit to access all our local businesses and to get to Lake of the Isles, Bde Maka Ska, Loring Park and the Sculpture Garden,” she said.
“My preference was for a more ambitious design for Hennepin south of Lake Street, but it was implemented before the Transportation Action Plan was adopted. I appreciate the pedestrian improvements and the inclusion of bike lanes. It would have been better for the bike lanes to have been concrete protected or at sidewalk level to deter drivers from parking in the bike lanes. I would like to see more greenery, public seating, and dedicated bus lanes.”
Lalla supports the proposed design for Hennepin north of Lagoon, in part because she believes it will create a street where she can walk, bike or bus to businesses without fearing for her safety. Her friends and neighbors don’t park on Hennepin the way it is now because they worry about stepping out in fast-moving traffic, she said.
“It’s important to begin by noting that the current design of Hennepin Avenue reflects generations of prioritizing fast car travel over the needs of people and neighborhoods. The recommended layout is an inclusive design that redistributes space in a way that considers the needs of everyone who uses the street,” she said. “The current design of Hennepin Avenue is a pass-through street that encourages speeding. The recommended design will bring more people to the area. It can become a place to gather, linger, shop, and dine at our great local businesses. The most important change brought by this design is that no matter how people get around, they can do so safely.”

SMALL BUSINESS EXCITED ABOUT CHANGES
Mike Norton is the founder of Railbox Consulting, a small technology company focused on the logistics industry. Its office has been on Hennepin Ave since 2018, and in the Uptown area since 2016. “Being in a hip and walkable area is a huge plus for our company as we try to attract and retain the right employees to help us continue to grow,” he said. Norton commutes to the office from his home in the Lynnhurst neighborhood by car most days, but says he avoids Hennepin because it is so chaotic.
He is part of Hennepin for People. “We’re a small business and we’re excited about the proposed changes,” he said. “Businesses will benefit from the recommended design; they’ll see an uptick in foot traffic from wider sidewalks, dedicated transit lanes, and bike paths. They’ll also benefit from the improved curb appeal, with less asphalt and more green space. Ask anyone who has ever parallel parked on Hennepin if it was a fun experience. While I can appreciate that a few businesses are concerned with losing some of their city-subsidized on-street parking, the reality is we’re talking about roughly 10% of available parking spots being removed.”
According to Norton, “A bigger focus on street safety will make a big difference for people who are regularly in and around Uptown. Narrower street crossings, truly protected bike lanes, and a median to better regulate the flow of car traffic will make it safer for those of us who are out and about in Uptown on a regular basis. The recommended redesign is a comprehensive plan that considers multiple modes of travel in a thoughtful way.”
Norton is disappointed in the first phase of the Hennepin Ave. South project “because the bike lanes weren’t safe and separated enough. The painted bike lanes between Lake and 36th have essentially been a joke to this point. Cars are constantly parked in them, forcing cyclists out into traffic. I travel to the Netherlands for business regularly, and the Dutch philosophy on bike lanes is that it should be safe for everyone between eight and 80 years old. The current recommended design has truly protected bike lanes, separated from traffic and safe enough for me to feel confident about our 14-year-old daughter riding her bike in them. We tell her to avoid the new painted bike lanes and use side streets instead because it’s less dangerous,” he observed.

BETTER FOR BIKERS AND PEDESTRIANS
Businesses who have signed on to support option one include: Sencha Tea Bar, Brazil Law Group, Railbox Consulting, Greenspoon Family Daycare, Pizza Hut (2313 Hennepin Ave.), Shingle Creek Capital, Hennepin Grocery Store, and Chipotle. Local organizations who support option one include: Midtown Greenway Coalition, 30 Days of Biking, Our Streets Mpls, Bike MN, Sierra Club - North Star Chapter, Move Minneapolis, Nice Ride Minnesota, Move Minnesota, City of Skate, Bike Lane Uprising and Joyful Riders Club.
“The Hennepin redesign takes businesses, residents, walkers, cyclists, and transit into account by facilitating a place for them to safely coexist on Hennepin,” said Norton. “Right now, Hennepin Ave is designed to accommodate as many cars on it as possible to minimize the inconvenience of traffic during peak traffic periods; everyone else is an afterthought. We can’t treat Hennepin like a highway and then expect people to enjoy their meal on a restaurant patio or feel comfortable walking from shop to shop. The recommended redesign gives a more equitable share of the space to people who are here every day, and not just to those driving through.”
Lalla said, “In the plan I see that the city of Minneapolis takes seriously their adopted climate and transportation policies like Complete Streets, Vision Zero, and the Transportation Action Plan. It’s easy to say what your values are – much harder to act. By following through on implementingthese policies it helps build public trust. Also reflected in the plan is a city that takes climate change and racial equity seriously.”